Isla Mujeres History on Facebook & Website
Today, Isla Mujeres reports two more cases of C-19 for a total of 228 with 20 deaths and 193 recovered.
The state Geoportal has updated the Incidence Rates and it's no surprise the Tulum has the worst in our Northern Zone. Tulum has been featured the US / English-language news after its super-spreader "Art With Me" festival last month resulted in at least 17 attendees testing positive in NYC & Miami, after traveling home. Antonio Romero, an administrator at Hospital de Tulum, the hospital nearest to Tulum’s hotel zone, told The Daily Beast that they’ve admitted “multiple people” with COVID who attended the Art With Me festival, and that they almost exclusively treat tourists who’ve contracted the virus. He said the hospital typically receives about two to three American tourists a day with COVID, but that the majority of their patients hail from Chile, Argentina, and other South American countries.
The Incidence Rates for Active cases in the Northern Zone, per 10,000 inhabitants are: Tulum-4.28, Holbox/LC-2.56, Solidaridad/PDC-2.0, Cancun/BJ & Puerto Morelos-1.86, Isla Mujeres-0.51, Cozumel-0.12.
The Governor said this is a definitive week for the state in regard to continuing in Yellow, noting the Southern Zone is at the limit between Yellow and Orange on the state epidemiological light. The Contagion Risk is above 1, which means each person is infecting more than one other person, which indicates an upward trend toward more infections, more hospitalizations and greater risks for the entire population. He said, "We had reached a Contagion Risk of 1.3 and 1.5, and today we are at 1.02 in the Northern Zone."
He recalled that the state is currently in Orange of the Federal epidemiological light, explaining that 7 points are needed to reach Green. He said we had gotten down to 12, but now we are back up to 16, which returned us to Orange.
The state has begun application of 10,000 rapid tests, setting up tent-testing centers in the ten colonias with the highest numbers of cases and in locations where there are large influxes of people. He said increasing the geo-location of active positive cases will provide better statistics that allow for better decision-making. He said they have also been working toward decreasing mobility.
The Governor warned that there will be more in-depth supervision of businesses such as restaurants and attention will be paid to transportation. He said for the festivities this month, such as posadas (parties), Christmas and New Years, stricter preventive measures will be imposed to avoid a rebound like the one that has been taking place in other parts of the country. He made a call to municipal governments and all state government agencies to supervise compliance with health protocols and, above all, to Quintana Roo families, businessmen and all citizens to take care of themselves and their families. There should be no more than 10 people meeting in closed spaces.
He emphasized that it is important to maintain the fundamental sanitary measures to keep Quintana Roo on the downward curve that it was on in previous weeks and that was lost a few days ago, such as frequent hand washing, wearing face masks, maintaining distance between people and abiding by the protocols in businesses, shops, hotels and restaurants.
He said if we return to Orange on the state epidemiological light, it would be a setback to the economy, with less visitors in the hotels and restaurants. (Note-the State light has two zones--we are the Northern Zone. Capacities are 60% in Yellow and 30% in Orange, for hotels & restaurants.)
Sources-Interview by Radio Turquesa & article in NotiCaribe-"Esta Semana Sera Definitoria", Daily Beast, Insider, Reactivamos Q Roo, and the Governor & Q Roo social media sites. 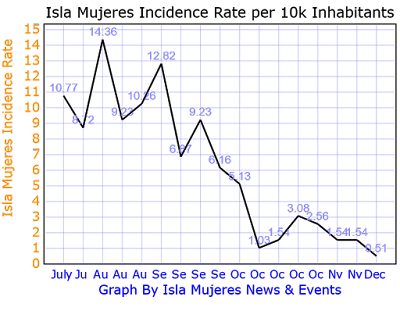 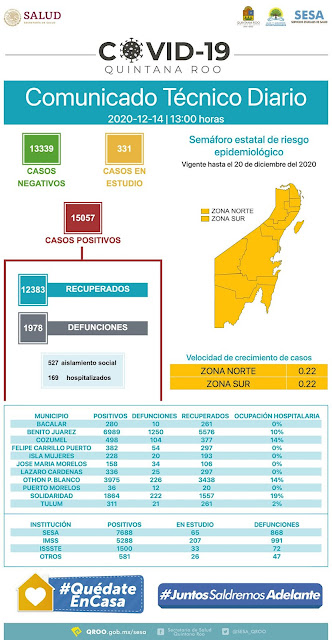