PROUD TO BE PART OF THE TRADITIONS OF ISLA MUJERES: MAYOR JUAN CARRILLO SOBERANIS
• Carnival Isla Mujeres 2017 kicks off with great response from islanders
(Isla Mujeres, Quintana Roo February 25, 2017) .- The Isla Mujeres Carnival 2017 began on the Town Square stage in front of the Town Hall (Palacio Municipal) with the coronation of Queen Alejandra I and King Benny I, who accompanied by islanders who enjoyed the activities organized by the municipal government.
For his part, the municipal president, Juan Carrillo Soberanis, said he was happy to be a part of this island tradition and thanked everyone for attending the event and he thanked those who were responsible for the good organization: "Carnival has always been very important for all families of the island, and I am proud to be able to share these moments with them. ''
He also recognized the work of the Organizing Committee, who were was in charge of the entire Carnival Isla Mujeres Carnival 2017, which proved to be a success on its first night, when attendees were able to participate in various activities.
"Every year, hundreds of islanders are participants in this event, and I thank those who have been with us this year, either as part of a troupe or as spectators," said the mayor, as well as giving assurances that for his administration it is very important to maintain the traditions of island families.


There are many videos of Carnaval dancers performing


Tourist industry expects the month to close well
Turisteros esperan un muy buen cierre de mesr.. [+] Ver masFull article at this link
Hotel occupancy is at 85% and expected to exceed 90% during Carnaval. Overall the HIM group reported an occupancy of 78% during February while the Small Hotels Fascinantes del Centro reported 90%. This does not include the guests staying in "pirate" homes and apartments who do not pay the 3% lodging tax and are usually promoted on the internet to tourists in the US and Canada. It is hoped that occupancy rates could reach as high as 100% during Easter, when rooms are nearly impossible to find, except for from last minute cancellations.
The weather was warm and sunny, therefore the beaches were busy and the golf cart rental agencies reported that demand was at 100%. The restaurants and stores were also doing a good business, which is expected to continue until the end of the Easter holidays.


Carnaval dancers cause traffic jams
El Carnaval llegó... y trastocó.. [+] Ver masFull article at this link
Some tourists and business owners were annoyed because detours were not arranged while Carnaval troupes were dancing in the streets downtown and affecting traffic. They blamed it on poor organization by the Carnaval Committee.  Many tourists and islanders enjoyed the performances and did not tire of taking pictures, while others waited patiently in their cars, golf carts, and taxis, until the dancing finished and the troupe moved on to another location to repeat the performance. There are about ten troupes including children, youths, adults, and senior citizens.

If the weather continues to be uncooperative, there could be a shortage of seafood during Lent. Since the fishing areas are ten to twelve miles out where the swells are higher, the fishermen are unable to go out there to collect their lobster traps or to fish when the waves are large. The lobster season ends on the last day of February, and they are currently banned from fishing for grouper or its derivatives, which has a three month ban season this year. (The lobster ban lasts four months). 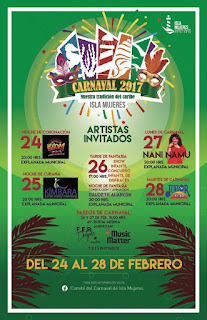 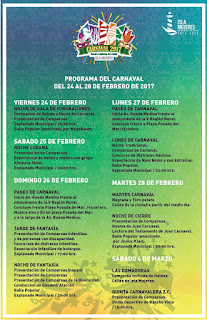 Parking for Carnaval: At the Casa de la Cultura & at the Airfield. It also says If you drink, don't drive and recommends arriving early.

Troupes dancing in the streets Saturday. Photos by Bruce. 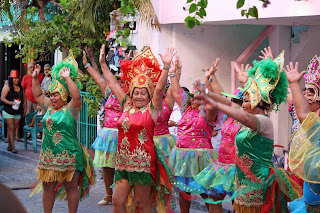 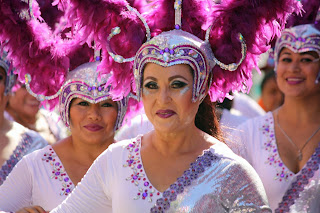 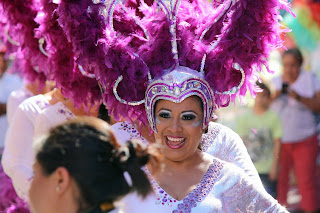 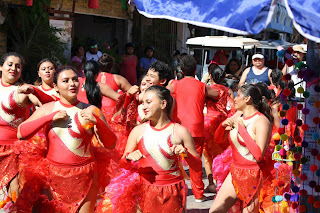 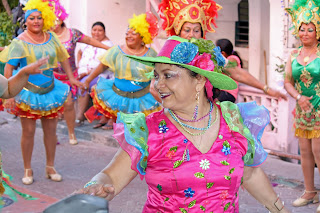