ISLA MUJERES, 30 de enero.-
Leer más...
A group of islanders conducted a clean up campaign on Saturday morning in honor of World Wetlands Day at one of the bodies of water in Isla Mujeres. They also cleaned and picked up trash at one of the beaches of Isla Mujres on the western part of the island near the municipal slaughterhouse. They said they do these campaigns for the benefit of Isla Mujeres and the islanders, with the intention of encouraging good habits among the children and youths of the isle.

ISLA MUJERES, 30 de enero.-
Leer más...
A pet costume contest is scheduled for Sunday, February 7, as part of the activities for Carnaval, which takes place February 5-9. According to the announcement, all pets should be registered with the Department of Ecology, if they are from Isla Mujeres. Owners are responsible for cleaning up feces from their cat or dog during the event. First, second, and third places will be awarded based on ingenuity, originality, and creativity of the costume; coordination between the pet and owner; and the behavior and attitude of the pet. Photo from City FB page.


Dive shops complain other shops are "pirates"
Denuncian piratería en buceo en la isla. [+] Ver mas
The association of dive shops in Isla Mujeres wants authorities at all three levels of government to look into dive shops they call "pirates", saying those shops are employing foreigners and violating various regulations in Mexican law. They intended to discuss this with Mayor Agapito Magana Sanchez this week, but at the last minute there was confusion over the appointment, and it was rescheduled. The spokespersons for the group made a call to Immigration and to the Hacienda (Tax-Treasury) in an attempt to stop this activity.
Antonio Gonzalez, treasurer of the association and Misael Fernandez, secretary, said, "They are not employing local people. There are only foreigners working there, which is not permitted. This is deliberate competition, which no one is stopping." They accused four dive shops, who also provide whale shark tours, who are named in the article. They said it appears the four shops have obtained official documents, such as operating licenses, despite these alleged irregularities.
It is noted that one business is operated by an Australian in partnership with an Argentinian manager, and that another also has dive businesses in Playa del Carmen. The accusers said, "These businesses are international chains who want to compete indiscriminately and cause ruination, without respecting pre-established rates and procedures in environmental matters, and most especially, they are not complying with Mexican regulations, like everyone else."
Divelife of Playa Carmen has opened a dive shop at the hotel Isleño and the complainants say, "The arrival of this shop had great significance, because they offer activities such as whale shark tours and diving, displacing locals." There are persistent rumors that other shops from Playa del Carmen are interested in setting up their own shops offering whale shark tours and diving. A member of the Isla Mujeres dive shop association said, "We cannot allow this, because it opens the doors to outsiders and saturates the limited market that we have. We have talked with the authorities, but we have had difficulty making any progress in this respect."
They are seeking proposals about how to prevent the entry of the off-island companies. Antonio Gonzalez said, "Everyone must work hard (hay que mover el culo todos lit. everyone must move our butts) to prevent this problem of giving more authorizations (permits) to more shops from Playa del Carmen, because it will be harder for us if they are given."  They have spoken to the Director of Tourism, Gustavo Rodriguez, and to the personnel at Migration, and they plan to speak with the Mayor.


Boating activity resumes
Se reanuda la actividad náutica+] Ver mas
The restriction for small boats due to winds and waves caused by cold front #34 was removed by the Harbor Master on Saturday, after two days, and nautical activities resumed for fishermen, divers, tourists, etc. The closed season for grouper and snapper begins February 1st. Saturday dawned with low temperatures of 19 C outside and 22 C inside. At 8am, the winds had dropped off completely, with the port opened for general navigation.


Child dancers going to Nicaragua
Niños dandantes a Nicaragua] Ver mas
Dance instructor Renatta Rodriguez said children from the Renatta Dance Studio (RDS) will perform at Carnaval in Isla Mujeres, which begins next weekend, before their tour of Central America in the following weeks.
Their show is called "Viva Brasil", with girls four years old and up, who will represent Isla Mujeres, Quintana Roo, and Mexico in Nicaragua, as well as in Merida, Yucatan. They will perform for the Isla Mujeres public at the Town Square at 8pm on Saturday, Feb. 6 and on Tuesday, Feb. 9 at the same time and place. The music for their show includes Samba, Axe, Lambada, and Batucada, as a fusion of Brazilian rhythms, explained the professional who is always looking for different ways to delight her hometown fans and other audiences. There will be 45 dancers performing, as well as invited guests, and they look forward to entertaining the general public with a cultural extravaganza typical of their high quality performances on their tours within and outside the country in recent years.
They practice daily before noon in the upstairs of her home, located on Carlos Lazo street near the IMSS (Unidad de Medicina Familiar del Instituto Mexicano del Seguro Social). The dancers of the RDS frequently perform on the island; in Merida, Yucatan; in the Caribbean; and in Central America, and are already well known in the region. 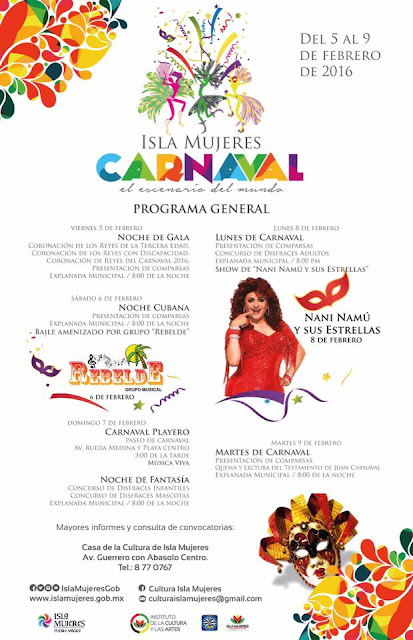