Thursday night.....The Governor says: The Federal traffic light status will be released tomorrow and Quintana Roo will be in yellow. Although the state light will be Orange from September 6 to 12, it is likely that next week we will announce that the Northern Zone is in Yellow, where a drop in the rate of infections has been reported.  Benito Juarez=Cancun, Solidaridad=Playa del Carmen, Lazaro Cardenas=Holbox.

Friday morning....Last night, the Governor said if our Northern Zone continues to exhibit decreases, it is likely to change to Yellow on the next determination. Although the entire state is Orange on the state light thru Sept. 12, Quintana Roo will be upgraded to Yellow on the Federal light starting Sept. 5th.

The Contagion Rate for our Northern Zone has decreased again, from 0.94 to 0.86, which means each infected person is infecting .86 other people and the curve is declining.
The status of the hospitals of our Northern Zone is Yellow with 38% occupancy of the regular beds and 18% of the ventilator beds. The Average Number of New Cases is in Green and the Number of Cases Daily is Orange.
Isla Mujeres led the state again with the largest decreases in cases, and Tulum was the only municipality in the Northern Zone with an increase. The last graphic shows the decrease experienced by the Northern Zone in the past four weeks. 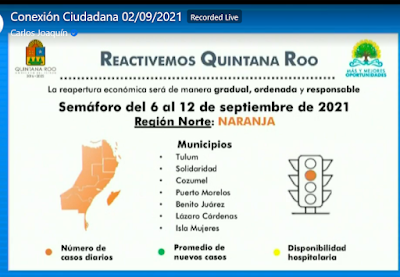 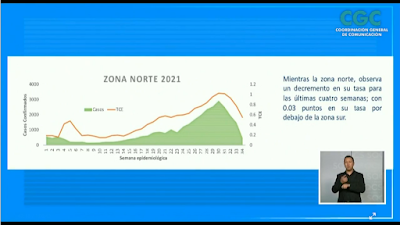 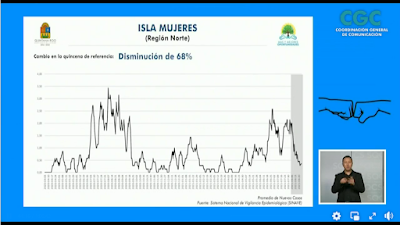 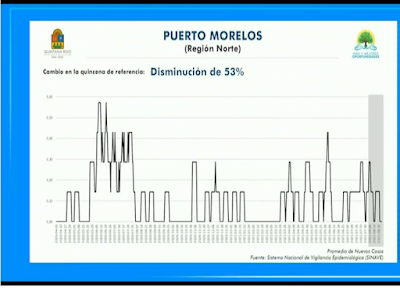 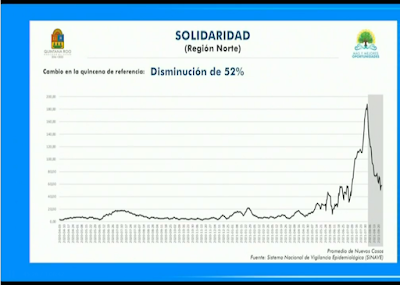 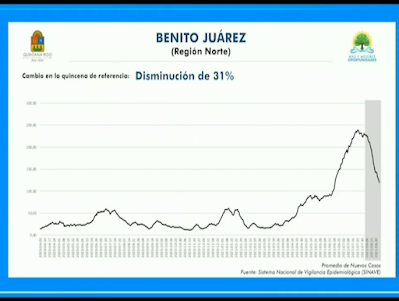 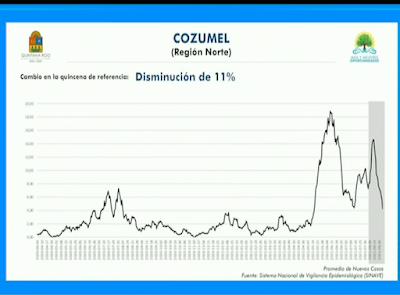 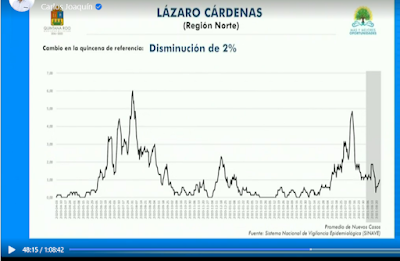 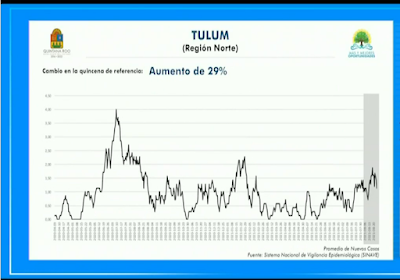 TODAY...Monday, Sept 6    Quintana Roo is finally back to Yellow on the Federal 'traffic light' of epidemiological risk, through Sept. 19th. Our Northern Zone of the state has reported decreasing cases for the past four weeks, and the Contagion Rate had dropped to 0.86. This means the curve is declining because each person is infecting less than one other person. The Average of Number of New Cases is in Green status and Hospital Availability is in Yellow, but the Number of Daily Cases remained in Orange on Thursday's update. The Governor said if our Northern Zone continues to report decreases, it is likely to change to Yellow on the next determination, which would begin next Monday, Sept. 13th.

Yellow status on the State light means hotels & other rentals (#3) would be able offer 60% of their rooms rather than 50%, and restaurants could use 60% of their tables (#4). The last two graphics show that beach capacities would increase from 30% to 60% and nightclubs remain closed until green. The businesses that are allowed to serve alcohol must also offer food and are classified as restaurants. There hasn't been noticeable enforcement of the 30% capacity limit on the island's beaches. 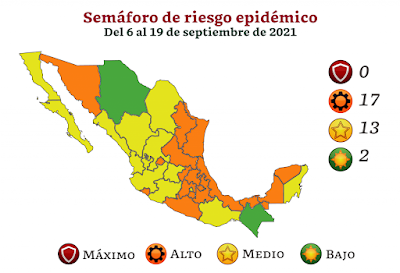 TODAY, Monday....The ocean is calm and the skies are overcast this morning, with some 'chubascos' / squalls in the forecast today & tomorrow, and hotter temperatures in the afternoons. The four-day forecast looks clear for Wednesday & Thursday & those are current pics from the satellite and North Beach webcam. Nothing's threatening us in the Caribbean or Atlantic...Larry's heading toward Bermuda. 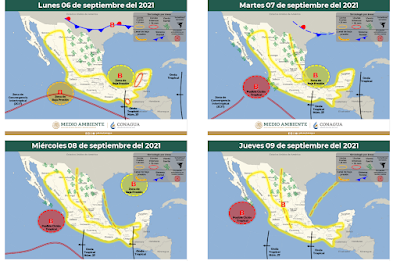 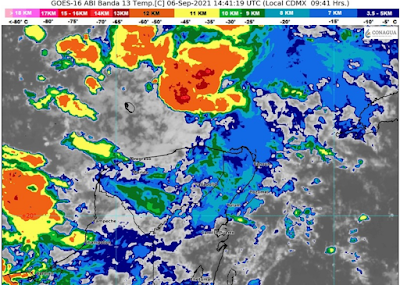 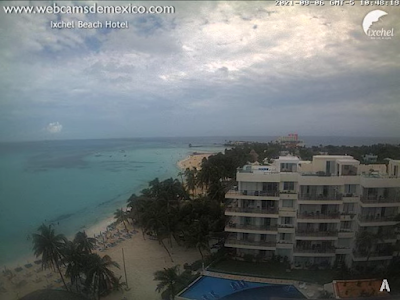 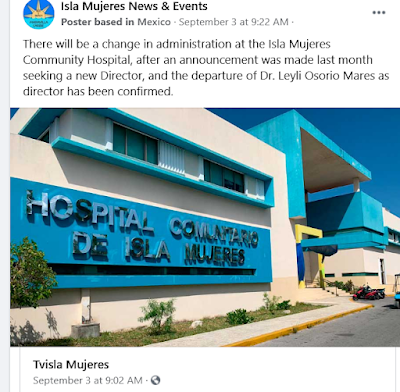 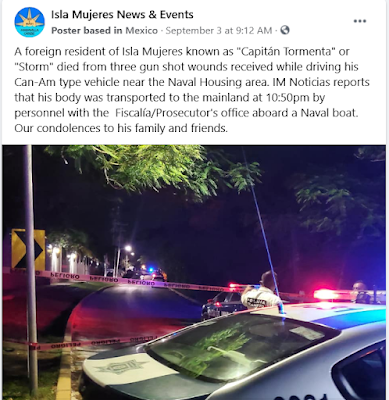 Tuesday morning,  Aug 31..COZUMEL, not Isla Mujeres......Governor Carlos Joaquín welcomed Mexico's emblematic "Cuauhtémoc" sailing-school ship to Quintana Roo, which has sailed the oceans of the world training Naval personnel for more than 36 years. Cozumel is the last Mexican port in their "Dubai Expo 2020" journey (in 2021). 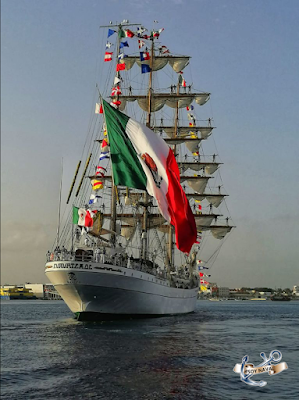 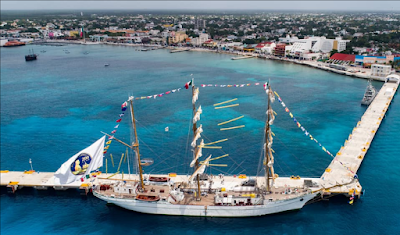 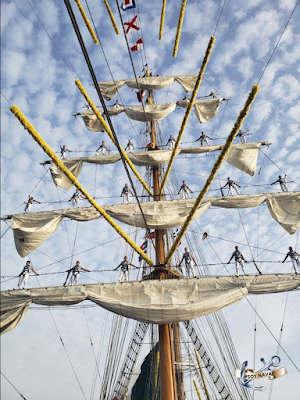 Tuesday, Aug. 31.....The municipal government reports they are working to keep Isla Mujeres beaches in optimal condition by removing the sargasso that has landed on North Beach, brought by sea currents that have been very active after the recent hurricanes.

The Isla Mujeres ZOFEMAT (Federal Zone) Director, Kerem Pinto Aguilar, said special machinery has been hired to speed up the removal of the sargasso. "We're working to the maximum with a commitment to have our beaches sargasso-free as soon as possible, because they are one of our main tourist attractions," she said. 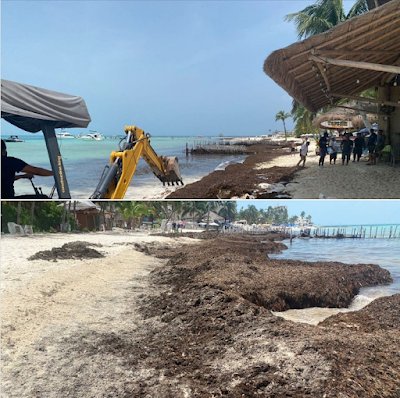 Tuesday, Aug. 31....Gunther Hepner, 77, apparently passed away of natural causes at his home, where his body was found and the authorities at the scene confirmed his identity. He provided veterinary care to birds, and was known as "Doc". Our condolences to his family and friends.

Sunday, Aug 29... My caption with a TV Isla Mujeres video...Cleaning and maintenance work is being done at Julio Saury grade school, led by the Mayor-elect, who is one of the volunteers. Her child attends attends this public school, which she describes as "emblematic", and she went there also. She says that similar efforts are taking place at other island schools, and schools are being evaluated throughout the state. With her is our state legislative representative and they explain that school will resume (for the first time since the pandemic) on a voluntary basis, but dates will vary. (This is because hundreds of public schools need work before they can be opened.)

Sunday, Aug 29... A successful cleanup campaign was conducted in colonia La Gloria Saturday along Paseo de las Aves where more than two tons of trash were removed. Ten trash cans were installed and twenty chit-palms were transplanted by a group of more than 70 people. They contributed their "granito de arena" (grain of sand) to keep the streets of Isla Mujeres clean and we thank all of them for showing love for this island and its people. Thanks to all of you!! Photo credits Noti Isla Mujeres. 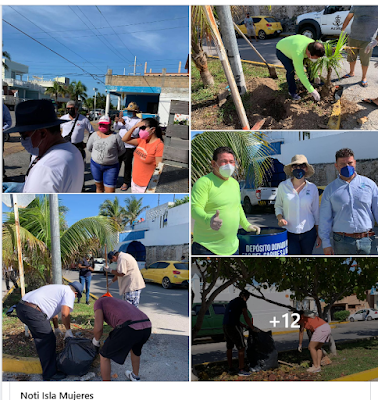 Saturday, Aug 28....The State Attorney General's office (FGE) has confirmed the identity of the body found yesterday morning as the young islander whose family had reported him missing and had posted notices on social networks. His mutilated remains were found inside a black bag in the undergrowth a few meters from the Caribbean Sea, in front of the FOVISSSTE apartments, and identified by his brother. TV Isla Mujeres reports that the young man's name was Carlos G.G.V.

La Tertulia reports that the family of Gabriel "N" had posted on social media that he had been missing since Thursday, and his tattoo was identified on the remains found in two blag bags in undergrowth near the Caribbean Sea, in front of the FOVISSSTE apartments. His friends, family and acquaintances characterized him as a quiet person who liked beer, didn't get into trouble and who didn't have enemies. https://www.facebook.com/tertuliaim/posts/1140680743428122
Our condolences to his family and friends.   Photo credit TV Isla Mujeres 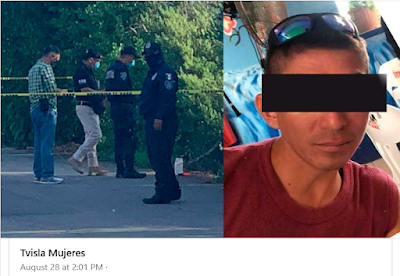 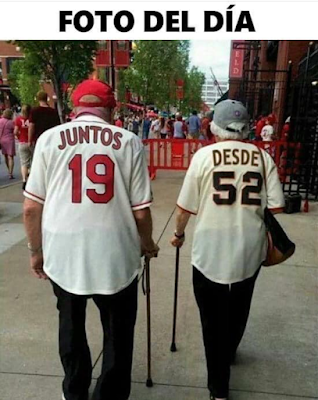 August 28...The process of the transition of power for the municipal government has begun, which is public and involves protection of property, records, archives, documentation, databases, and human & financial resources as they are moved from one administration to the next. The new Mayor, who is the daughter of a previous Mayor, will take office on Sept. 30 and was elected on June 6th. The current Mayor was elected to a federal legislative seat. 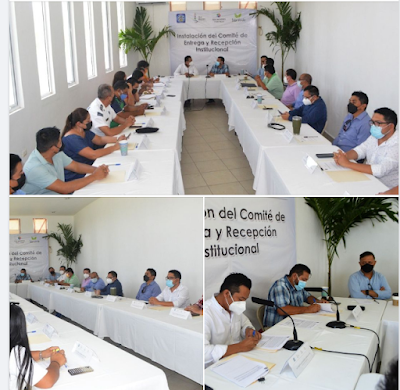 Early reports had indicated we could be in the path of Tropical Storm Ida, but the trajectories shifted east toward Cuba where the storm became a Category1 Hurricane, leaving Isla Mujeres undamaged and without exceptional winds or rain. 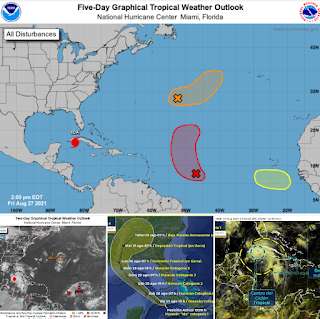