Our Northern Zone of the state continues in Orange thru Sept. 5, as does the Southern Zone. There are decreases in all of our Zone's municipalities except Cozumel, with Isla Mujeres having the largest decrease in the state. Our Zone's Contagion Rate decreased again, to 0.86, which means each infected person is infecting 0.86 other people and the curve is declining. The vertical axis of the graphs indicates the average new cases daily and the horizontal axis shows the entire pandemic with the past 15 days highlighted in grey. 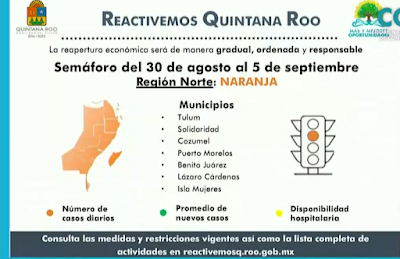 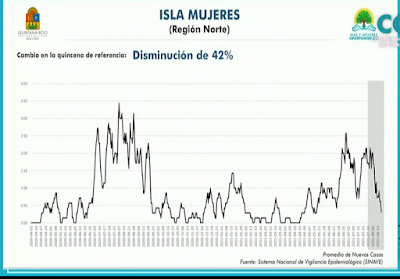 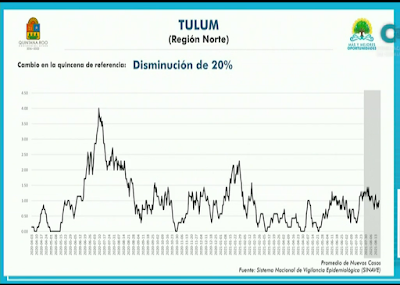 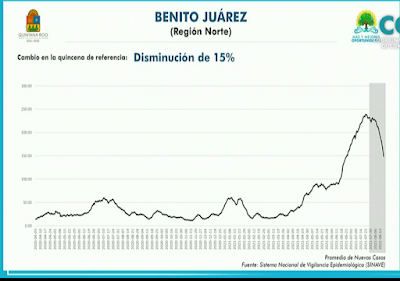 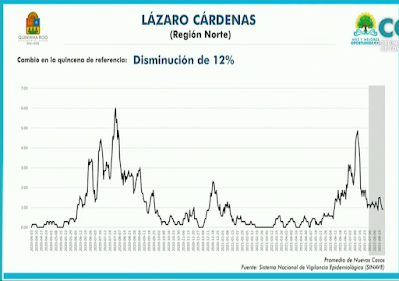 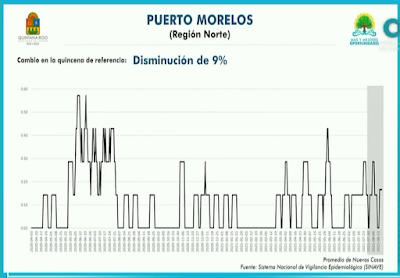 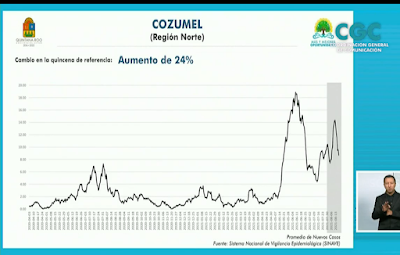 The Depression is now Tropical Storm Ida after the hurricane hunter plane found sustained winds of an estimated 40 mph (65 kph). The northern Yucatan Peninsula is still advised to monitor the progress of the storm, and our area was removed from the Key Messages in the second Advisory, concerning expectations of life-threatening heavy rain, flash flooding, and mudslides.
Compared to last Thursday's hurricane, this time we're on the 'back' side which tends to be less intense. And we're not under any watches nor warnings at this time, although western Cuba is. 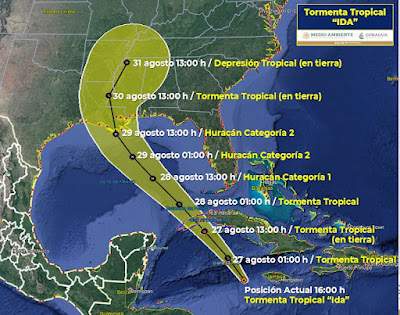 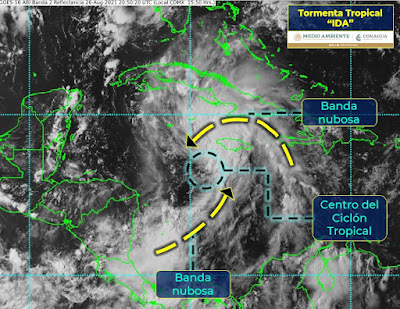 Monday....Isla Mujeres reports a total of 40 deaths from C-19 since the beginning of the pandemic, with 421 cases and 368 recuperated, officially. (Not all cases make it into the official statistics.) The Geoportal still has data from 8/20, which reported 11 active cases by colonia in Isla Mujeres as five in La Gloria, two in Salina Grande, and one each in Salinas, Downtown, 23 de Noviembre, and Meteorologico.

>>Both zones of Quintana Roo remain in Orange this week (thru Aug 29) on the state epidemiological light and the state remains in Orange on the Federal semaforo (thru Sept. 5).
>>Roughly half of the state's population lives in Cancun's municipality of Benito Juarez (>900k of 1.86 million), therefore the status of our Northern Zone is heavily influenced by their statistics, which haven't been good. They've experienced an explosion of cases this summer, approaching 250 daily (reported officially). At the height of the pandemic last summer, they topped 50 daily, which occurred again with the Christmas-NY holidays. They're still exceeding 200 per day, but there's finally been a downturn in the past two weeks.
>>In Isla Mujeres this summer, new cases have exceeded two per day, compared to the height of last summer when they exceeded three daily. The graphic shows a 4% increase over the recent 15-day period (in grey), with a downward trend toward the end.
>>The Contagion Rate for the Northern Zone has finally dropped below 1, indicating that each infected person is infecting less than one other person. It's 0.94, down from 1.12.
>>This week, vaccines are being administered in other municipalities, but currently none are scheduled in Isla Mujeres, where 81.5% of residents have received their first dose and 58.5% are fully vaccinated, with a total of 20,846 doses administered. The Governor has reported that 90% of C-19 patients hospitalized in the state are unvaccinated, with 8.5% having one jab and 1.5% fully vaccinated.

These graphs are from last Thursday's video. 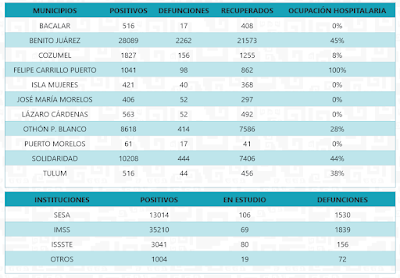 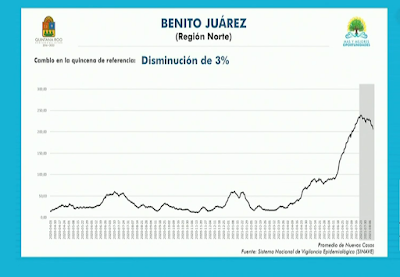 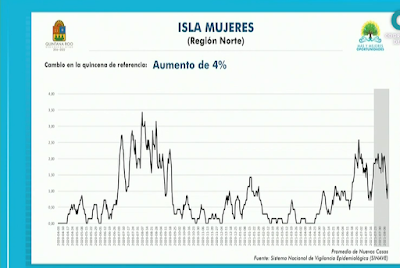 Naval personnel conducted tours and provided assistance in affected areas of Quintana Roo after the passage of Hurricane Grace, including personnel for the Fifth Region Naval base in Isla Mujeres. The Marine Plan, activated due to the presence of Hurricane Grace to assist with the necessary preventative actions, is in the Assistance phase.
There have been 376 members of the Navy involved, as well as 49 vehicles, with naval air and land units, in addition to the Search and Rescue unit, who actively participate in safeguarding human life at sea, evacuations, draining sewage, and removing brush and debris, among other activities. These activities were carried in coordination with the state and municipal Civil Protection authorities.
A temporary platform is being built at the airfield for the casting of cement structures for use in the construction of the new Naval hospital. It will be used for the placement of a scale (una báscula) for use until December, when the work should be completed, and then everything will be removed, according to a spokesperson for the EMSA company, who are in charge of Mexican Naval works throughout the country. Construction on the Naval hospital began a month ago and casting of the structures will begin in 15 days.
Concerns have been expressed about authorization of the work at the airfield, and (a representative of) VIPSAESA (VIP Servicios Aéreos Ejecutivos, S.A de C.V), who administrate the runway, said they did not know who authorized them. 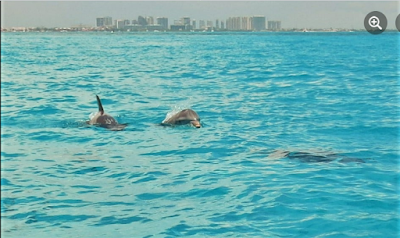 On Friday morning after Hurricane Grace, ZOFEMAT (Federal Zone) employees removed debris and about 25 tons of sargasso from North Beach and Playa Centro, to provide islanders and visitors with beaches in the best condition. The arrival of the sargasso and debris was a result of winds from Hurricane Grace, of about 100 kph (62 mph). It was taken to the Trash Transfer Facility.
So far this season, about 661 tons have been removed from the beaches of this vacation destination. An increase in sargasso began in June and between June 20 & August 20, 412 tons were removed. The ZOFEMAT crew removed a smaller amount on Saturday, which had arrived during the night, and was taken to the Trash Transfer Facility. 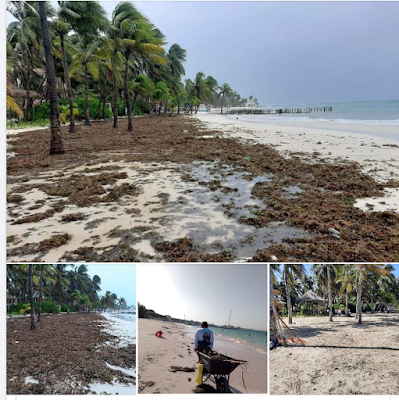 More than 150 sea turtle nests located in an incubation pen on Media Luna beach were lost during the passage of Hurricane Grace. It is possible that some of the affected eggs could be rescued.
The pen was in compliance with SEMARNAT regulations and was reportedly established when the Tortugranja pen was exceeding capacity. However, it is noted that in 2020, the Tortugranja facility had enough space to protect more than 900 sea turtle nests.
It is also noted that there were complaints from former volunteers alleging mismanagement and removal of some eggs by Tortugranja employees, or one in particular, allegedly without action being taken by the facility's Director.
The Tortugranja most recent update reported they had protected 592 nests so far this season with 68,062 eggs. These consist of four Hawksbill nests with 552 eggs, 27 Loggerhead nests with 2945 eggs and 561 Green nests with 64,565 eggs.Source & Photo--La Tertulia 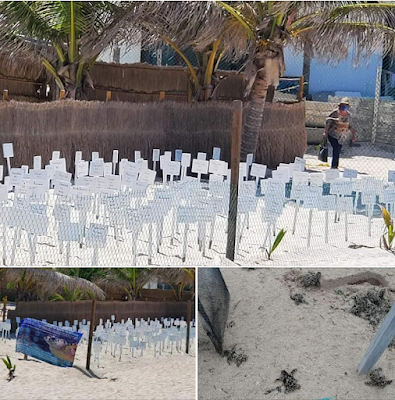