Our Northern Zone remains in Orange on the State Epidemiological light, as does the Southern Zone. The state is also in Orange on the Federal light.  The Governor advised Isla Mujeres to work harder at contagion-prevention measures, with a 5% increase over the highlighted 15 days and cases per day reaching 2.5. Benito Juarez (Cancun) shows an increase of 20%, with a downward turn at the end. The numbers in Solidaridad (Playa del Carmen) are quite concerning, with an historic peak and a 95% increase. (The left axis is cases per day, the bottom line is entire pandemic timeline.) Tulum, Cozumel and Puerto Morelos also reported increases, while Lazaro Cardenas (Holbox) shows a decrease. 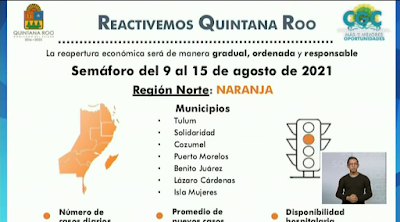 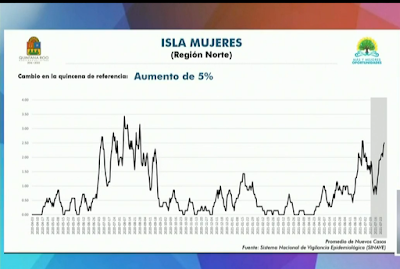 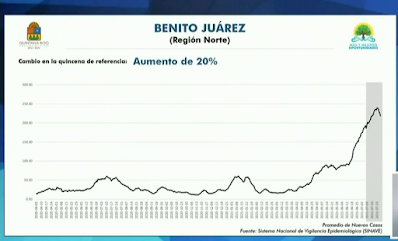 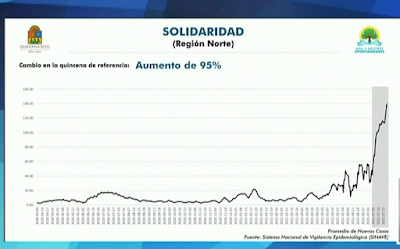 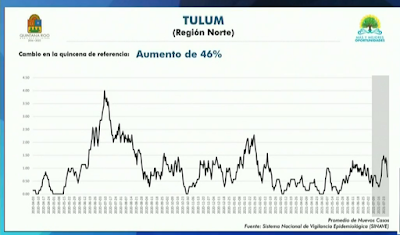 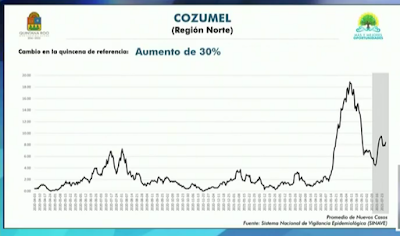 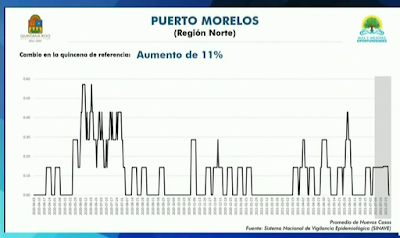 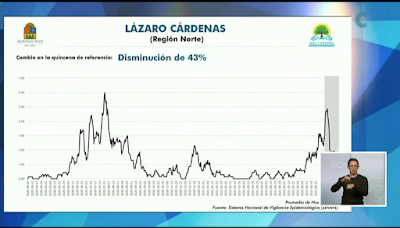 TUESDAY...Noti Isla Mujeres reports that both people were taken to the Community Hospital after they were shot while driving in this metallic grey "Spark" near the Makax cooperative.

TODAY... La Tertulia reports that attempted robbery is likely to have been the motive for the incident that caused a Code Red on Tuesday when gunshots were fired at two men traveling in a grey compact car, according to the FGE. The State Attorney General's office said the motive was probably robbery because the victims worked for a financial institution and they have ruled out that it may have been a reckoning between criminal groups. The two men had just delivered a loan of 50,000 pesos, and were moving on to another location, when a Ford "Escape" (plate USF-959-D.) drove up and a passenger in the back fired a 9mm gun repeatedly.

The victims, J.L.C. and O.A.B.P., residents of Cancun, were taken to the Isla Mujeres Community Hospital, where the former was discharged and the latter was taken to Cancun General Hospital to recover from a gunshot to his left leg, which was not serious. In a previous report, La Tertulia identified the victims as security guards from Cancun.
That same evening, the Ford truck was located, abandoned on Josefa Ortiz Street, where there are no cameras connected to the C-2 unit. The prosecutors will request the collaboration of individuals with surveillance cameras in the area because it is possible that the three suspects were recorded when they exited the truck. In a previous report, Tertulia said the abandoned vehicle was a Ford "Sport" reported stolen in the state of Chiapas.
The cameras of the Ultracarga vehicle ferry will also be reviewed to see if it is possible to determine the day when the vehicle crossed. The vehicle was locked and the necessary procedures will be completed to inspect the interior in the presence of Servicios Periciales, where the gun used in the attack or other evidence may be found.

Jetway has added a crossing from Isla Mujeres at 11:30p. Their first ferry departs the isle at 6am. On the mainland, they are based at the Puerto Juarez API Terminal & have departures from 6:30a to 11p. 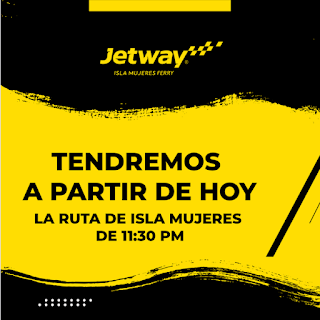 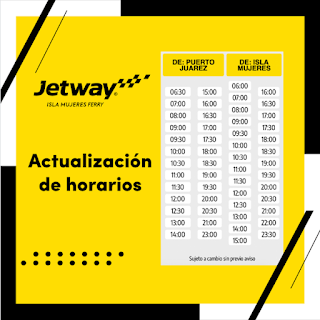 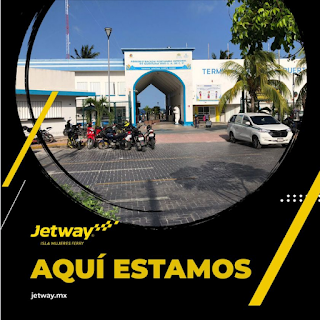 The municipal government reports that Isla Mujeres continues to be a popular vacation destination in the Mexican Caribbean, with health protocols that are followed by the hotels and restaurants to provide greater security for visitors. White sands and turquoise waters are among our many attractions. The hundreds of visitors who arrive daily contribute to the economic recovery process of the municipality during this pandemic, when it is important to practice health measures which include wearing masks correctly, handwashing/disinfectant gel and healthy distancing. 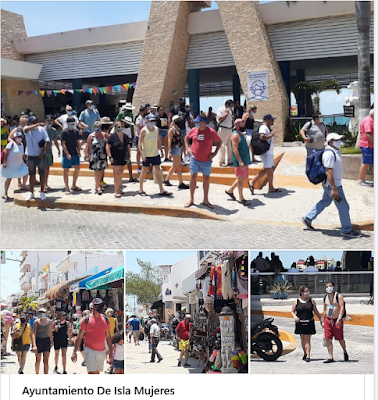 YESTERDAY....The municipal government reports Trip Advisor has awarded North Beach as #1 among Mexico's seven best dreamy beaches of 2021. This article also notes that North Beach has maintained a position as one of the top 25 most popular beaches in the world, thanks to its white sand, turquoise waters and quality standards due to the crews who work daily keeping it in optimal condition 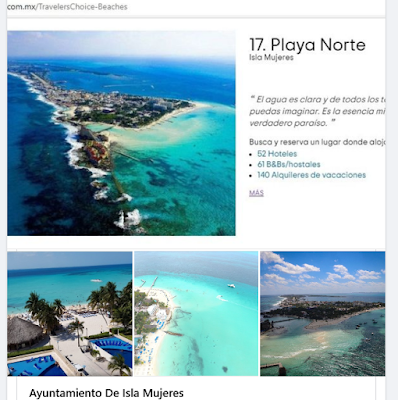 TODAY...Noti Isla Mujeres posted a video of a peaceful protest by residents of colonia La Gloria in front of the CFE (Federal Electrical Commission) concerning electrical outages for the past three nights and damages to their appliances. They complain that babies are crying all night long from the heat and being unable to sleep is affecting their ability to work at their jobs. The woman holding up her 2000+ peso bill says she only has two bedrooms, a living room and kitchen with no air conditioning, and that they are paying plenty of money for bad service. They want answers and say they are not getting any. The reporter notes that the outages are not limited to La Gloria and are affecting the other colonia

SATURDAY  ...Second doses of Pfizer vaccine for the thirty-somethings will be administered at the Bicentennial Dome Tuesday thru Friday. Bring the listed documents, wear your mask correctly, maintain healthy distance & use disinfectant gel. 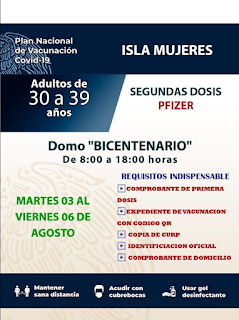 SATURDAY....La Tertulia reports that Isla Mujeres closes out the month of July with the discovery of another lifeless body.....Early today, the body of a male 40-45 years of age was found on a secondary road at the southeastern area of the island, various meters from the Trash Transfer facility. Police cordoned off the area, and personnel with the State Attorney General's office conducted an inspection, then ordered the body moved to Cancun where an autopsy will determine the cause of death.

Unofficially, if was said that it appeared that the man received stab wounds and it is theorized that his body was thrown at that location, but this has not been confirmed by authorities.
La Tertulia notes that there are two other deaths under investigation this month, which include the recent discovery of the lifeless body of a man, who was allegedly a construction worker, at the bottom of a pool at a residence under construction. The other case is that of a deceased German woman who was a resident of Isla Mujeres for several years, Regine Beatrix Roessler. Her body was found near Cabo Catoche, after she had been reported missing for a month and half, and her boyfriend is the prime suspect.

SATURDAY....As of yesterday, there have been 389 cases of C-19 officially reported in Isla Mujeres. The number of deaths reduced from 39 to 38 and 329 have recovered. In our municipality, 18,308 doses of C-19 vaccine have been administered. Residents forty and older have been provided with both doses, the thirty-somethings should receive their second dose soon, and the 18-29 year olds had their first jab this past week. More than a million doses have been administered statewide.

Thursday night, the Governor said they have been administering about 40,000 doses daily. He said all of the intubated patients are unvaccinated, as are 90% of the patients hospitalized for C-19. Of the other 10%, 8.5% received one dose and 1.5% received both doses.
He expressed concern about the nearly 250 cases daily in the municipality of Benito Juarez (Cancun) and was pleased with the 38% decrease in cases in Isla Mujeres. He is also very concerned about the 110% increase in the municipality of Solidaridad (Playa del Carmen).
He said the Contagion Rate for the Northern Zone has increased to 1.15, which means each infected individual is infecting 1.15 other people and the curve in ascending. In the Southern Zone, it increased from 0.97 to 1.0, which means they went from decending to plateauing.
The Northern Zone's hospital occupancy rate remains below 60%, but there are three hospitals above 80%, of which two are in Cancun and one in Playa del Carmen. He said these two municipalities need to pay special attention to prevent more increases to avoid our Zone from going into Red Status. It will remain in Orange next week, thru August 8th. He emphasized the importance of wearing face masks correctly, handwashing, and maintaining healthy distancing.
He reviewed the new option for businesses who want to exceed the 50% capacity limits now that tourism has increased. This includes creating a 'sanitary bubble' by having all employees and clients fully vaccinated or presenting a recent negative C19 test, with some other measures to obtain the special certification. 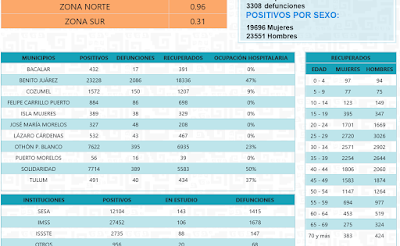 MONDAY... An article by IM Noticias says that six jet skis have been impounded by the Harbor Master and secured at the Naval pier, of which three were operating in the area of Playa Centro and three near North Beach. Recently, there have been ongoing complaints about jet skies from tourists, boat operators and businesses with concessions in the Federal Zone. The vehicles were reportedly being rented clandestinely and their operation is prohibited within the national marine park areas.

FRIDAY....TVisla Mujeres reports that CFE (Federal Electrical Commission) engineers have been trying since last Thursday to repair the mega-generator that was installed on the airfield two years ago. They have confirmed that the equipment will not work soon due to the failure of a part that is difficult to obtain.

At the airfield near the mega-generator, there are several trucks loaded with diesel fuel. Neighbors are concerned about the risk of an explosion and have been requesting the relocation of the plant for months. They complain that they are affected by the noise, smell, and pollution.
On Friday, there were blackouts in several neighborhoods once again, including La Gloria where it remained dark for more than two hours.
Two weeks ago residents of Punta Sur blocked the truck of engineer Aurelio Tamay Balam, not letting him move until service was reactivated. He confirmed that service is exceeded in Isla Mujeres. The CFE has decided to install generators (in the neighborhoods) which run on diesel.
This blog is brought to you by....