For September 13-19, Monday thru Sunday, both Zones of Quintana Roo have changed to Yellow on the state epidemiological light, increasing capacities at hotels and restaurants from 50% to 60%, among other changes. The Contagion Rate for the Northern Zone has dropped to 0.8, which means the curve remains in decline, with each case infecting less than one other case. Last week Isla Mujeres decreased the most in the state, and this week our municipality was second most decreased, and reporting less than 0.5 cases daily. Benito Juarez (Cancun) has dropped to under 100 cases daily. The Governor reminded everyone of the importance of not letting down their guard, especially for the National Independence holiday. 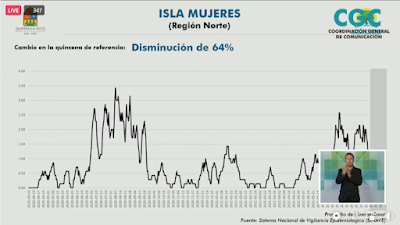 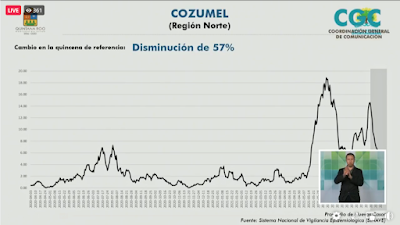 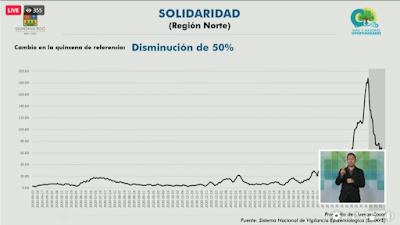 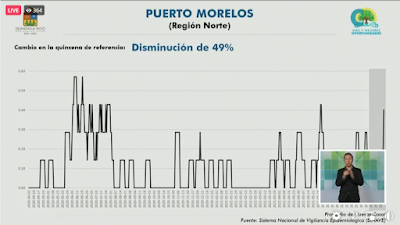 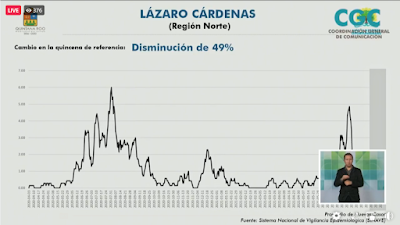 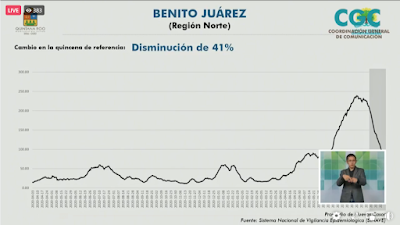 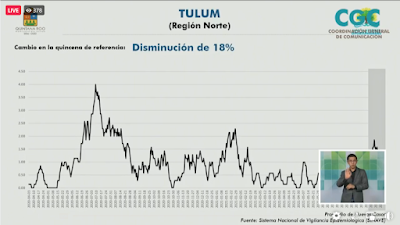 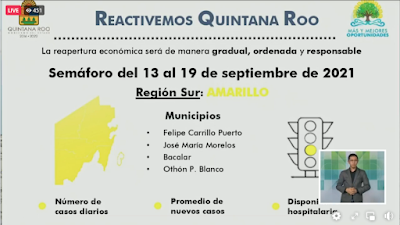 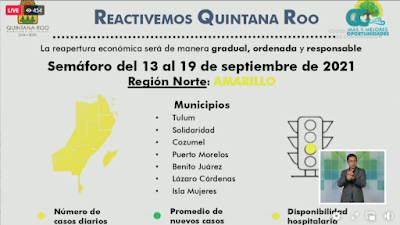 It is reported that the annual event transporting the Virgin of Caridad del Cobre to the chapel at Isla Contoy will probably not be done publicly again this year, due to the pandemic. It is likely that the fishermen will transport the icon privately, which is taken to the island to provide protection during the lobster-fishing season, which continues until the end of February. Normally, hundreds of Catholic parishioners in dozens of boats participate and attend a Mass outside the Isla Contoy chapel. Photo credit: Isla Mujeres al Momento 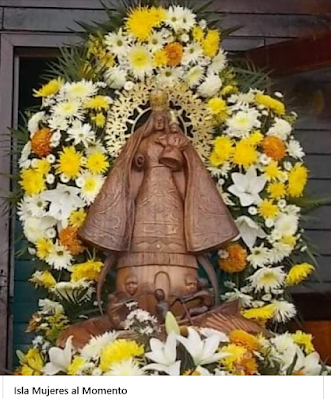 Workers with the municipal Department of Public Services cleaning up a mess that was making a bad impression on tourists who tour the area daily. Photo credit: Isla Mujeres al Momento 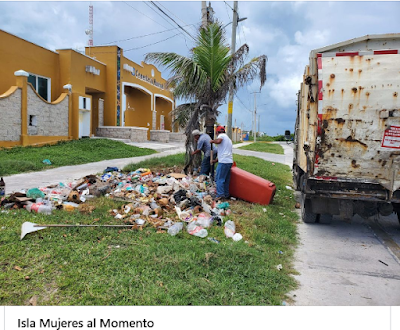 Isla residents are complaining about small fishing boats that have been observed on various occasions illegally casting nets at the southern part of the island near Garrafon Park, where fishing is not allowed. They want authorities to intervene. Photo credit: Noti Isla Mujeres 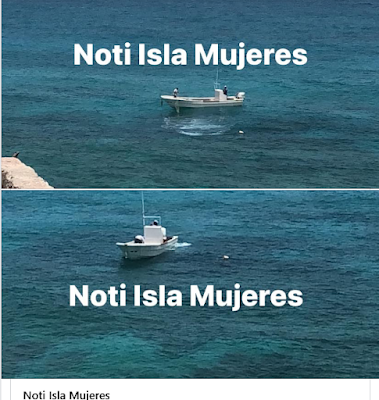 Noti Isla Mujeres reports that this parked motorcycle caught fire after it was hit by a truck bringing merchandise to Chedraui, in front of the store. Photo credit: Noti Isla Mujeres 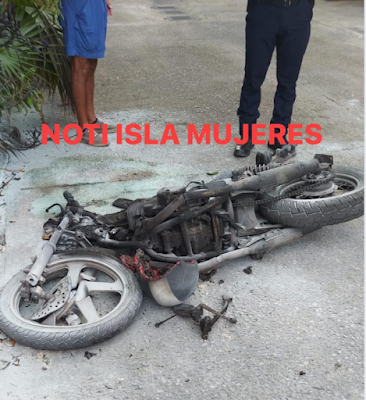 Two Isla Mujeres fishermen were among the four crew members rescued by the Key West Coast Guard yesterday, who were adrift without water, food or fuel. Except for mild dehydration, they were healthy, despite being missing since August 29th, when they'd left Puerto Juarez aboard the 40-foot "Agua Limo II", with plans to arrive in Progreso on the following night. After they failed to arrive on the 30th, their relatives informed the Port Authorities and a National Advisory was issued, requesting support from the maritime community to locate them.
On Tuesday, Sept. 7th, at 12:45pm, a US Customs & Border Protection crew notified the Key West Coast Guard that a 40-foot fishing boat was adrift approximately 63 miles southwest of Key West, Florida. Personnel with the Coast Guard station towed the boat and brought the four survivors to their station to await Emergency Medical Services on Wednesday. No injuries were reported and one of the Coast Guard officers said, "It's always good to see a happy ending during a search and rescue case, while strengthening our relationship with our neighboring countries. We are happy to help the four men return home to their families."
The rescued Isla Mujeres residents are Jorge “La Grulla” Ceballos Aguilar and Carlos Reinaldo Gordiano Bermúdez, and the other two crew members are from Cancun. They are expected to return home in the next few days. Screenshot from Noti Isla Mujeres. 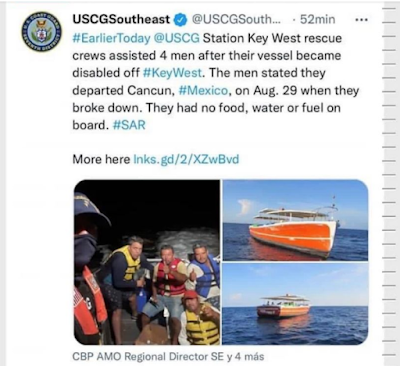 The only Tern sanctuary in Mexico is located on Islet Yunque, provided by the Mia Hotel. A video conference was provided for the high schools students of Colegio Bacchilleres entitled "Discovering the Sanctuary of the Charrán (Tern)" by Cecilia Alvarez Ricalde of the Green Jay Association. It included information about the various species that inhabit or visit the island and their place in the cycle of life, as well as their protection and conservation. This was coordinated by the municipal government's Ecology Department and Mia hotel. 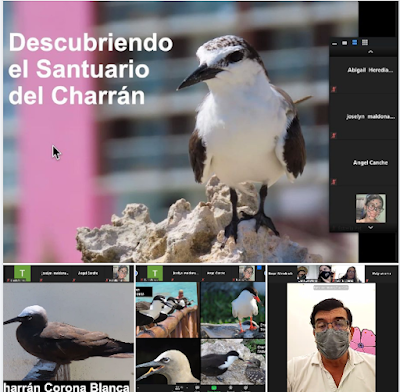 In honor of state Manatee Week and the National Day of the Manatee, the municipal government and specialists with Dolphin Discovery provided a series of video conferences for Isla's middle school students. Due to the pandemic, the usual tours at Dolphin Discovery were not carried out this year. Educational efforts are aimed at engaging the young people in protective and conservation actions and teaching them more about this species.
Isla Mujeres has a foreign-resident manatee from Florida. Here's our most recent article about him:  On this blog-Link or on FB w video- https://www.facebook.com/groups/1602706669889221/posts/1946476508845567/
Tuesday was International Day of the Manatee. (Yesterday was International Day of Journalists.) 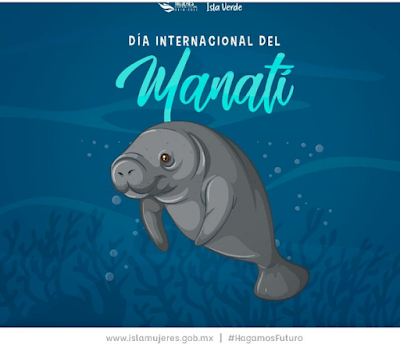 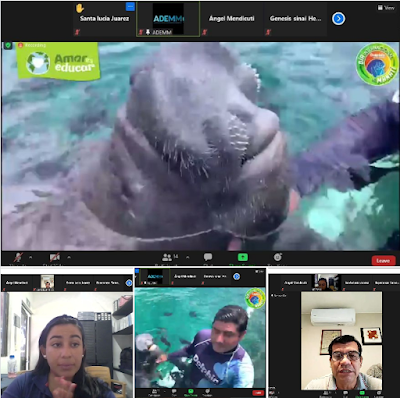 In nearby Puerto Morelos, the "Coralium" laboratory has developed a sexual method for preserving corals, instead of cloning them, as is done in other labs.
Coralium's senior researcher, Dr. Anastazia Teresa Banaszak, said, "There is no reef in the Mexican Caribbean that has not been affected by hurricanes, by tourists, or by poor water quality. So we work on these damaged or dead reefs-as they are mostly occupied by algae rather than corals-and we try to recover these spaces."
For reefs damaged by tourists or boats, the lab uses the damaged pieces and restores them, stocking different species of corals, and "sticking" them onto the reef. This cloning and planting of broken pieces is asexual reproduction. If they survive, they stick to the bottom and can form a new colony, separate from the colony that gave rise to them. These new colonies are genetically the same.
However, sexual reproduction is Coralium's main method of restoration. This produces new corals that are genetically unique and the product of combining two different individuals, with different DNA. Dr. Banaszak said the genetic diversity of these corals allows them to adapt to climate change.
Using Coralium's specialized method, coral gametes (reproductive cells) are collected to fertilize the eggs with sperm, collecting gametes from different colonies of the same species and mixing them carefully and cultivating them.
Next comes the embryonic development, where a larva is produced. Normally, this larva would go swimming, moving to a place to settle on the reef, but at Coralium the larvae settles within the laboratory. They are provided with light, food and water until they grow larger and have a better chance of survival, and then they are planted on the reef.
The Doctor said that that Tropical Storm Grace caused a lot of damage to the laboratory, but she noted that the "Saldo Blanco" reported by the state after its passage was thanks, in part, to the protection offered by the reefs. (Lit.-'white balance' and means things turned out okay.)
She said more resources will be needed and new conservation techniques will be created, as they continue working on restoration of the reefs. She asked people to contribute to improving the environment by reducing the amount of trash we produce, reducing consumption of clothing, and reducing fertilizers, pesticides and all toxic materials which eventually end up in the sea and on the reefs, affecting all of us.
Source: Lado B / by Valeria Rodriguez, photos Cortesia: LINK to Article in Spanish. 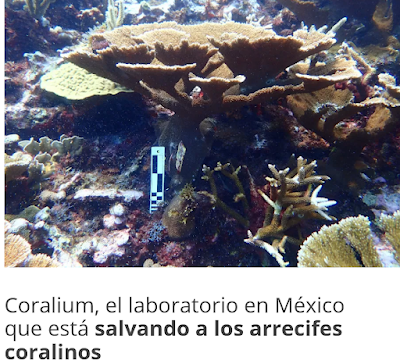 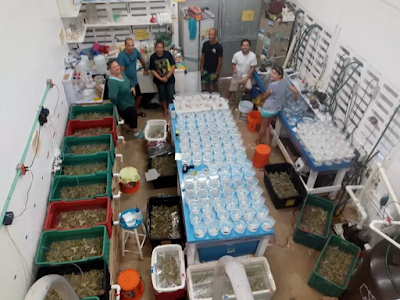 This morning....There's nothing coming our way and it's a pretty, sunny morning. That Yellow Tropical Wave over NE Honduras is expected to emerge over the southern Bay of Campeche on Saturday, where it has a low chance of development before moving over mainland Mexico. There is a medium/50% chance of development by early next week of that Orange Tropical Wave into a Tropical Depression as it moves WNW over the far eastern Atlantic.

On the extended forecast, the yellow circles forecast rain, in lesser amounts than the orange circles, and the green squiggles indicate wind. 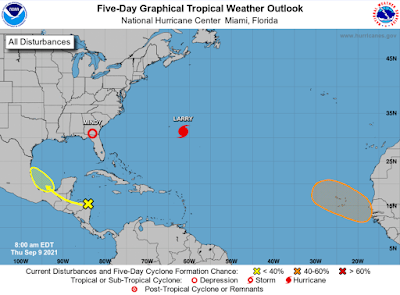 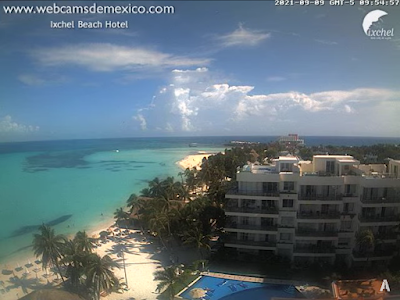 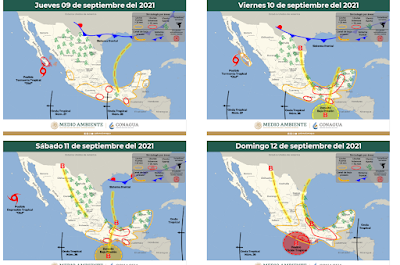 Monday, Sept 6 ...The beaches of Isla Mujeres are clean of sargasso and beautifully manicured thanks to the efforts of the ZOFEMAT (Federal Zone) crews, as well as employees of the beach businesses and volunteers. Following the recent passage of hurricanes near the Peninsula, sea currents brought a significant amount of sargasso to the shores of the island. Removal included promptly hiring specialized machinery to assist the crews and volunteers, and the beaches are again exhibiting their natural beauty, attracting domestic and international tourists. 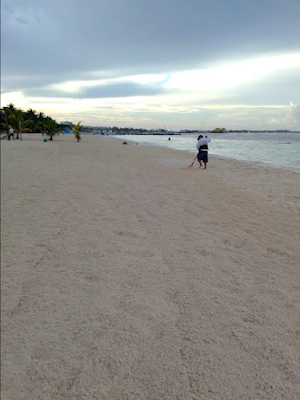 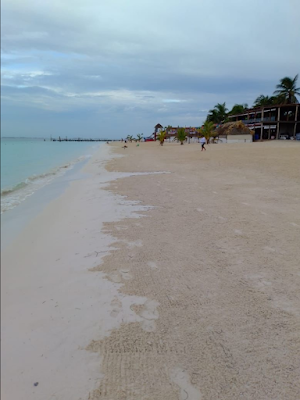 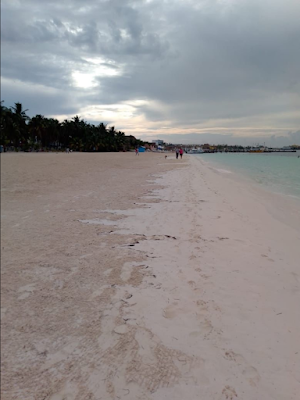 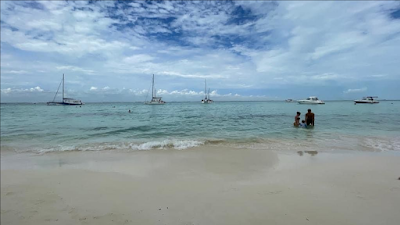