From Pirate Refuge to Established Settlement
For centuries Isla Mujeres was a shelter for pirates, until the Lafitte brothers were expelled in the early 1820's. After that, the isle was only occupied a few months of the year by a handful of fishermen from Campeche, Yucatan, and Cuba.This is evident from statements such as those of American John L Stephens, the "Father of Mayan Archaeology", who visited the island in 1842. He said there were only two huts and a shelter made from branches, inhabited by three fishermen and two natives, who were fishing for turtles. The three fishermen told him nostalgic tales about the good times they'd once had with the Lafitte brothers. Less definitive reports from visitors in 1825 said there were about a dozen huts.
When Mexico's War of Independence ended in 1821, the Spanish regime was ousted, and the Yucatan acquired statehood in 1824. There were constant disputes and regional clashes during the following decades, with the government alternating between local politicians and those sent from the center of the country. Despite these political difficulties, the Yucatan went through a period of sustained economic boom, associated with the exploitation of the Maya by the whites.
At that time, Yucatecan society consisted of three main classes or castes. The upper class were the whites (ladinos) and creoles (criollos) who held the economic and political power. Below them were the mestizos, people of white and Mayan blood, and at the bottom were the Maya, as well as some other caste groups of mixed heritage.
On July 30, 1847, Mayan rebel leader Cecilio Chí lit the fires of a social war whose flames engulfed the entire peninsula within months. Acts of terrible cruelty took place among the combatants and the Yucatan government was unable to stop the rebellion. The British in Belize saw an opportunity to expand their territory and supplied arms and ammunition to the Mayans, resulting in a terrible, sustained conflict that lasted throughout the remainder of the 1800's.
This "Caste War" raged across the peninsula, destroying property and decimating families, cutting the population of the Yucatan in half by 1855. People seeking peace from the bloodshed and mayhem fled to Isla Mujeres and Cozumel, causing a migration into these previously unpopulated areas, while others left on ships or escaped across the border to Central America.
The refugees who wanted to become island residents repeatedly petitioned the government, and after intervention from politicians and the Catholic Church, they were allowed to found the town of "Dolores" on August 17, 1850, with official publication of the decree on August 21st. The government was busy with the war and expected the settlers to survive by their ingenuity during those early, difficult years.
When the Mexican-American War, (aka La Intervención Estadounidense) took place from 1846-1848, the Yucatan was an Independent Republic, claiming neutrality, and rejoined Mexico in 1848, during the Caste War.
In April 1848, agent of the Yucatán government, Don Justo Sierra, appealed to American President Polk for military aid against the rebellious Maya, who he said were threatening to drive the whites into the sea. He offered the United States "dominion and sovereignty" over the Yucatán, in return for its support. This same offer was also extended to England and Spain. The United States declined this offer of annexation, and the US sternly advised the Yucatan government that offering themselves to European powers would NOT be tolerated. The US ignored the Yucatan government's requests for assistance.
Meanwhile, Valladolid had been abandoned & the Yucatan was on the verge of military collapse. The British were supplying arms from Belize to the revolting Mayan peasants, and three Spanish ships had landed in Sisal with two thousand rifles, gunpowder and other supplies. There is an oral history on Isla Mujeres about seeing bonfires on the mainland, fueling fears that rebel Mayan troops might travel the short distance to the island.
There are few reports from this period when strict regulations were imposed upon the island's settlers, including that no one could leave without permission, nor be absent for more than six months, or they would risk losing rights to their land. They could obtain final possession of their land after six years of residency.
These regulations required that the settlers themselves build the streets, a barracks, and a Public building, as well as providing public services like keeping the town clean and doing repairs. After 12 years, the government finally provided a small school with a thatch roof and sand floor, and it was the townspeople's responsibility to provide the teacher.
Those early days were not easy and the villagers worked together. They were incommunicado, in an unhealthy environment without services for water or electricity, threatened by war and forgotten by the government. They made repeated requests for help to higher authorities that went unanswered. These were times that required tenacity, courage and perseverance.
To be continued with "Who Were These Settlers?" with information from the Census of 1866
Some of this information was obtained from an article by Fidel Villanueva Madrid written August 2013, which is no longer available at that link. Photo from Travels in Yucatan by Alice D. Le Plongeon 1876 and the drawing of Punta Sur is by Frederick Catherwood (who accompanied Stephens). 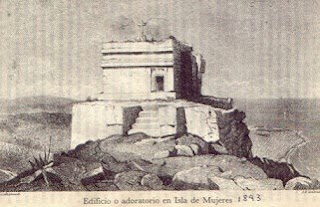 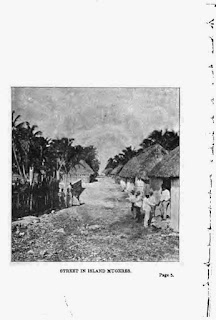