See TVIM below. There's also a DQR article about donating food to families in the Continental Zone.


As part of the municipal government's commitment to promotion of inclusion and equity among its employees, and under the instructions of the Mayor, Juan Carrillo Soberanis, a workshop was held at the Casa de la Cultura by the Women's Institute, led by Miriam Trejo Leon. It was attended by more than 60 officers with the police department's divisions of Public Safety, Preventative Security, Traffic, and Crime Prevention. "With this type of event, we seek to promote respect and equity among public servants, in order to have trained officers who respond correctly to any situation," said the director of the Municipal Women's Instance. The title of the workshop was:  “Nuevas Masculinidades y Lenguaje Incluyente” (The second part is "and Inclusive language"...I'm not  sure how to translate that first part.)

Whale shark permit problems continue
http://www.tvislamujeres.com.mx/acorralan-a-permisionarios…/
July 7 The Federal Office of Environmental Protection (PROFEPA) is carrying out verification operations on the boats that offer Whale Shark tours, which poses serious problems for the boat captains who are still waiting for a resolution from CONANP (the National Commission of Protected Natural Areas).
Meanwhile, CONANP says that it is still waiting for the Isla Mujeres Harbor Master to deliver his opinion of the physical conditions of each of the boats that provide this service. The CONANP Regional Director for the Mexican Caribbean and Yucatan Peninsula, Ricardo Gómez, said that the deadline was Tuesday, but the Harbor Master does not appear to be hurrying with this request. He says they have asked the agency to provide this information, which is necessary to make the readjustment to the permits. The season continues to advance, which began on May 15 and only lasts for four months of which nearly two have already passed.
He said PROFEPA personnel are carrying out inspections about care of the whale sharks, in addition to ensuring that the boats don't violate the established regulations which could cause them to be a detriment to the animals.
It is recalled that following the meeting with the CONANP officials, Isla Mujeres Mayor Juan Carrillo Soberanis and the Harbor Master, it was agreed that a physical review would be given to each of the 240 boats which have permits to operate this season, because not all of them are in good enough condition to provide this service. The idea is that permits would be revoked from those who are not in compliance, which would free them up to be assigned to those who have both their documents and a boat that is ready.
These delays are generating significant economic losses for the boats who are candidates to receive permits, since nearly half of the season has already passed, which ends in mid-September.

Repairs to paint of renovated basketball court
- http://www.tvislamujeres.com.mx/empiezan-a-remover-la-pint…/
On Friday, employees of  the company "Constructora Moyuc SA de CV" began working to remove the paint from the downtown basketball court "Jose del Carmen Pastrana". The paint began to flake off shortly after the inauguration of the renovated basketball court, which was done at a cost of more than 1.3 million pesos. These repairs are being done under the warranty, and the company explained that the problem was caused by a reaction between the paint and the cement.
The damage appeared when it rained after the court was inaugurated, and the City issued a press release explaining that the repairs would be done under the warranty, which are now taking place.

New facilities inaugurated at The Little Yellow Schoolhouse thanks to the German government
- http://www.tvislamujeres.com.mx/gracias-a-la-embajada-de-a…/
On Friday, the new room at the Little Yellow School house (Centro de Apoyo Psicopedagógico) was inaugurated, which was constructed with money donated by the German embassy, who contributed $9000 (172,000 pesos). This was invested in a nursery school area, where young children with special needs will be given sensory and motor stimulation therapies, beginning in September.
In 2010, the German embassy officials signed an agreement with the school through their representative, David Schmidt, and contributed 9065 euros (147,873 pesos), which was invested in the building of an area with three cubicles for the administration of the center. This construction was inaugurated in February, 2011, with the attendance of the German ambassador to Mexico, Dr Edmund Duckwitz.
Last year he said they are committed to continuing to work with the special needs children who are served by this facility and signed an agreement for this donation and construction. This second agreement was obtained thanks to the support of  Mr. Rudolf Bittorf, in collaboration with the Friends of Isla Contoy Association, which was chaired by Mr. José Magaña Galué.

Waiting for neighboring municipality to pay its debt
Urgente recuperar adeudo que tiene BJ[+] Ver masFull article at this link
This article is about a judicial response to a legal complaint (an amparo), which was made by Julio Cesar Osorio Magana concerning the island's Trash Transfer Facility. The article also refers to the debt owed by the neighboring municipality to our municipality of 9-10 million pesos which is related to use of Isla Mujeres property for regional landfill on the mainland. I'll read it more closely tomorrow, it's a little unclear to me & I don't have time right now to give it more attention.

Inician las fiestas del Divino Niño Jesús.. [+] Ver masFull article at this link
The two week celebration for  Divino Niño Jesús will take place July 10-20, and will include praises, prayers, healing of the sick, exposition of the Blessed Sacrament, laying on of hands and cultural activities, said the parish priest Raul Sánchez Alonso.
As a prelude to the event, this Sunday afternoon, the Santísimo icon will arrive by ferry, at 5:30 pm, from Cancún, and a procession of dozens of families will accompany it from the terminal of the Integral Port Administration of Quintana Roo (Apiqroo) to the parish of the Immaculate Conception. Believers are invited to pray before the Santísimo 24 hours a day. On Monday it will be moved to the Sacred Heart church (in colonia la Gloria) and will return to the downtown church on Thursday, to be in its niche when Father Carrillo participates on Friday.
Information about some of the participants is given, and their activities. They will be daily shows for the children in the evenings (tarde-noche), and entertainment by artists from local academies and of course there will be mariachis to sing Las Mañanitas al Niños Jesús. (Las Mañanitas is a birthday song that is also sung as a serenade to saints when their annual Saint's Day begins).
There will be a 50 peso donation requested for the two days of the event led by Cuco Chavez. On Monday the Mass for the devotees of the Divino Niño Jesús will begin at 7pm and there will be a procession in the downtown streets, which will end at the Town Square, where there will be entertainment (and according to the church's FB page...the activities will also include dancing & fireworks, also). 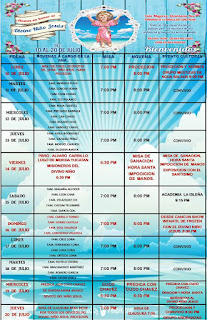 The second news brief reports that the dispute concerning the leadership of the Taxi Union seems to be coming to a conclusion, since the courts have apparently recognized that the statutes of the organization were violated, according to people involved in the conflict, who claim the leadership of Eduardo Peniche Rodriguez is ending. They will begin the process for a new election and plan to elect new leadership before the end of the summer. An audit is planned to provide information about the status of the accounting of money and distribution of plates over the past 12 years under the current leader. One of the main leaders behind this is Miguel Angel Chan Mena. 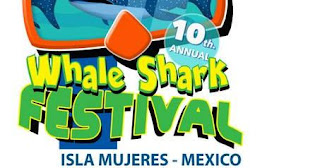