Positive expectations & welcoming attitudes about the new status of the airstrip

Concern about conflicts between tourism workers

Lanrry PARRA
ISLA MUJERES, 24 de noviembre.-
Leer más...
According to an explanation by staff with the municipal Tourism Department, there have been conflicts and disagreements between the comisionistas who sell tourism services to arriving visitors and boaters with the Tourism Cooperative "Isla Bonita". This is related to the comisionistas who work in the streets wanting to enter the Maritime Terminal to approach tourists, and the boatmen of the Cooperative going into the streets to attract tourists.

Positive expectations & welcoming attitudes about the new status of the airstrip

Isla Mujeres – BENEPLÁCITO Y POSITIVAS EXPECTATIVAS GENERA EL NUEVO STATUS DE LA AEROPISTA LOCAL
The Mayor of Isla Mujeres, Agapito Magana Sanchez, received the news with positive expectations and a welcoming attitude, that the administration and operation of the local airstrip will be the responsibility of the state government, beginning this week.
As part of the celebrations commemorating the Day of the Mexican Navy held at the Naval base on the island, commander Admiral Juan Guillermo Fierro Rocha presented the document to Governor Roberto Borge Angulo, which states that from now on the airstrip may expand its services, in order to promote and increase tourism on the island.
In response, the Mayor expressed his satisfaction and welcomed this event, thanks to the coordinated efforts of various governmental agencies including the State Ministry of Tourism, the Office of Visitors and Conventions, and the Tourism Promotion Trust. The Mayor said, "That the management and operation of the airstrip now rests in the hands of the state government is good news which offers the possibility for more tourists to arrive to the island in a direct manner." He said, "Since the beginning of my administration, we have had the support of Gov. Borge, which is critical to take advantage of the airstrip for tourism."
This year has been historic in terms of the island obtaining recognition, which is paying off with the presentation and development of this destination's ability to compete in the demanding and changing global tourism marketplace. The island has received the White Flag and Blue Flag awards for its main beaches, which designate high standards of quality for services and facilities, as well as respect and caring for the environment. The recent addition of Isla Mujeres to the roster of Pueblo Magicos of Mexico is another indication of the quality that is available for tourists and is another means for coordinating promotional campaigns worldwide throughout the year.
The three designations, in close coordination with the private sector and all of those involved with the local economy, offer improved conditions and opportunities for the development of tourism promotion. The municipal Director of Tourism, Gustavo Rodriguez estimates that at the end of the year, occupancy will exceed 90 percent. He said this year has been historic and record breaking in terms of the number of visitors and occupancy rates. 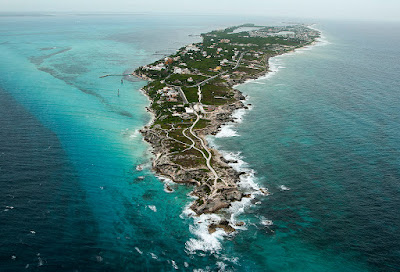 The public was delighted with the spectacular and colorful choreographies that enriched the performances.

Thursday, November 26, there will be a large Social Services and Assistance Fair


Grey dawn in Isla Mujeres
Gris amanecer en Isla Mujeres. [+] Ver mas
The dawn was gray and the beaches were nearly empty in the morning due to the weather yesterday. Even when there was no rain occurring during recent days, activities were reduced, and conditions were not favorable for merchants or tourism service providers. There were about a dozen tourists walking along the beach, but they were not swimming or lounging in the chairs, until the afternoon when there was more activity, but still very little compared to sunny days.
There is confidence that business will improve this weekend when the weather improves, and the end of the month should be better. Hotel occupancy in December is expected to exceed 80 percent.

Small business owners and fishermen in Isla Mujeres welcomed the news that the state government is taking over operation of the local airstrip, because it should improve tourism at this destination with the implementation of commercial flights and the improvement of the facilities to provide better services, especially for the affluent tourists who had airplanes and those who arrive in small groups.
Residents who have lived in Isla Mujeres for more than sixty years remember that long before Cancun became a  premier destination, Isla Mujeres received regional flights from airlines including Aeroméxico, Aeromaya and other commercial flights, which landed here and passengers could cross to Cancun. However, since the Cancun airport was built, this airstrip has been used exclusively by the Mexican Navy and some private planes.
It is considered a success that the Navy has turned over the operation of the airstrip for the improvement of the demands of tourism in Isla Mujeres. During a tour of the facility, the control tower appeared to be in poor condition due to a lack of maintenance, with obvious cracks. However, it is expected that the state government will improve the facilities, especially the parking, and will provide better infrastructure to provide for the arrival of regular commercial flights.
Carlos Perez, an Isla Mujeres fisherman, said that until recently, the municipality had failed to realize that the airfield could be used to connect with foreign countries, and he said, "Hopefully, with this new change, the demand will improve like we had before, and we won't be directly dependent on Cancun, because we need more tourism, and above all, because we are growing as a city, this could bring about great success."
Sergio Torres, who sells souvenirs, said this should improve the airfield facilities, saying, "Look what a good job the government did with the Maritime Terminal, and hopefully they will improve the airfield, because the tower is very old. Above all, it could be opened as a small airport for slightly larger flights bringing groups."
It is noted that the Isla Mujeres is growing in an uneven manner, since it is anticipated that the future could bring 22,000 new hotel rooms to the mainland part of the municipality, in addition to those that are on the island. The airstrip change has the potential to attract particular visitors with higher purchasing power.