Please pardon this being published a day late...I was at the parade yesterday instead of translating. Here are some scenes from the sidelines. (Before I found a shady spot to sit, I was standing at the back of a group watching the performances by the reviewing stand, where I could see clearly over the heads in front of me. After a while, I noticed a gentleman was standing behind me, and I tried to step aside, so he could see....and then I realized he was taking advantage of my tallness for some shade! ha!) It was an excellent parade, with many costumes and performances, that lasted for hours. 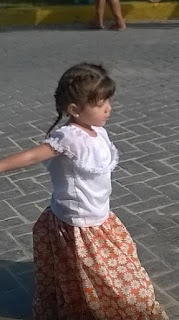 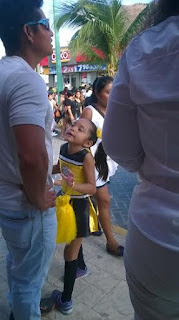 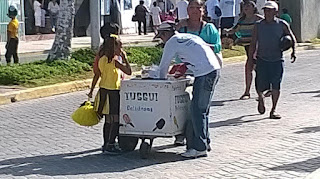 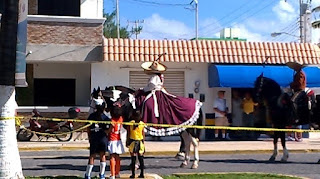 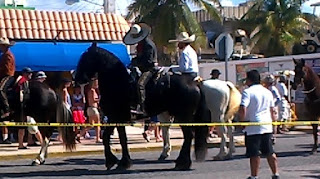 This information was already translated....

Making an agreement between the City & AA to fight alcoholism .

Lanrry PARRA
ISLA MUJERES, 19 de noviembre.-
Leer más...
A meeting is scheduled for noon Thursday between representatives of the City and the directors of AA (Alcoholics Anonymous) to work on the agreement that is signed annually between these to groups.  Issues that will be discussed at the meeting include methods of providing information from AA for the hundreds of City employees, giving access to AA representatives to the City jail, and the means by which the City will provide support for AA in terms of logistics and facilities to carry out events, and to possibly hold a conference.

Isla Mujeres – GRANDES EXPECTATIVAS DURANTE LA NOVENA JORNADA ESTATAL DE EMPLEO 2015
More than 150 job vacanices are being offered by various companies at the state's 9th Job Fair, whose opening ceremony was led by Mayor Agapito Magana and the state Secretary of Labor and Social Welfare, Patricio de la Pena Ruiz de Chavez. The event was held in the green dome in colonia Salina Chica, and participants offering jobs included hotels, restaurants, convenience stores, chain stores that sell electronics and furniture, and other businesses, who each had booths.
In his speech, the Mayor spoke about Isla Mujeres recently achieving the designation of Pueblo Magico, which he said will be a new tool to define and improve this tourist destination, to be one of the best in the world. He said they will invite companies and all participants in the local economy to participate in creating and strengthening the urban infrastructure, by providing training courses for all employees to understand that we are a Pueblo Magico. The world tourism market has become more competitive, and we must be up to par and on the forefront as one of the best destinations in the world.
Ten companies participated in the Fair, offering ~150 jobs to all sectors: youths, professionals, people with disabilities, and the middle aged and senior citizens. Recognition was given to Hotel Ixchel for being a business that is committed to providing jobs for people with disabilities. Companies that were recognized for offering the largest numbers of vacancies were: Pimsa (sic..I think this means Prisma),  Grupo Salinas, and the franchise OXXO.
A list of officials attending the inauguration of the event is given.

Construction: After destruction of acres of sea grape plants


More than 2000 islanders expected to be in the parade
Desfilarán más de dos mil isleños[+] Ver mas
More than a dozen educational, private, and military organizations will participate in the civic parade on Friday, down Rueda Medina, to mark the 105th anniversary of the Mexican Revolution, said Juan Carrillo Soberanis, municipal General Secretary. The Director of Sports, Enrique Barros Pena, said the New Generation Cahuameras will be participating.
More than 2000 people are expected to participate including representatives from the preschools: “Isla Mujeres”, “Tláloc”, “María Enriqueta Camarillo”, “Francisco Hernández de Córdoba” and “Jean Piaget”. The participating primary schools are:  “Julio Sauri Espinosa”, “César Mendoza Santana” and “Andrés Quintana Roo”. The middle school, Benito Juarez, and the high schol, Colegio Bachilleres are also participating, as well as INAPAM, CENDI, City staff, soccer clubs, children's baseball teams, taekwondo, and children's volleyball. Of course, members of the Navy will participate, and paramedics from the local Red Cross.


The public are invited to participate in improving the urban infrastructure
Invitación a la ciudadanía para participar en reforzamiento de la infraestructura urbana .. [+] Ver mas
This information was translated above in the Job Fair article...

This information has already been translated.