Relics of St. John Paul II coming to the Church of Immaculate Conception


Preparations begin for Festival of Caribbean Culture
Inicia el Festival de Cultura del Caribe.. [+] Ver mas
Preparations were being made on Thursday afternoon at the esplanade of the Casa de la Cultura for the Festival of Caribbean Culture (FECUCA), installing the stage where world class bands will be performing on Friday, Saturday, and Sunday nights. City workers were installing the stage, while specialists worked on the lighting and audio systems.
It is noted that one event will take place at the parish building of the Catholic Church "Immaculate Conception", which is the Saturday night performance at 8-9p by the Quintana Roo Symphony Orchestra with tenor Joel Montero. This building has a capacity for 350 people, with exceptional acoustics, which are needed for this performance. All the other events will take place at the esplanade of the Casa de la Cultura.


Fishermen are preparing
Se preparan pescadores.. [+] Ver mas
Leaders of the fishing cooperatives are advising their members to prepare the papers they will need to obtain financial assistance for renovation of fishing equipment including boat engines, boats, and traps. During early December there will be a module open of CONAPESCA (National Fishing Commission).
There is an estimate that the coopertive Patria & Progreso will need 250 traps, three boats, and eight to ten engines. It is estimated that among all of the cooperatives of Isla Mujeres, about 80 percent of their boats need new engines, which is about 150 in total. But to obtain one, the fisherman must be able to pay their share of about 50,000 pesos, while the larger portion is paid by the Federal government. It is very difficult for the fishermen to save money, when the catches are poor, so that they can only catch enough for their daily meals when the weather is good. 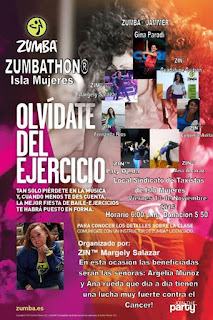 
Caribbean Culture Festival 2015 will be held outside the Casa de la Cultura, Nov. 13-15, all events are free. Residents & Visitors are invited.

Saturday, Nov. 14 at 7pm, there will be a performance by the Symphonic Orchestra of Quintana Roo, featuring songs written by isleños, including Virgilio “El Chino” Fernández and his son Virgilio Fernández. It will be at the building next to the Catholic Church on the Town Square. This will be followed by, at the Casa de Cultura, “El Chevo y su Swing Urbano”, who play a mix of Caribbean rhythms and urban music, including the hit: “Métela Sácala”. ?? (They are not on the poster, but Quequi lists them in their festival article published Tuesday) At the Casa de la Cultura: 8p Dance performance. Then Cumbia legend Celso Piña, will take the stage, creator of the hit “Cumbia Sobre el Río Suenan”, accompanied by Patricio Elizalde (Pato Machete).

From Cultura Isla Mujeres on FB (my translation from Spanish):
Celso Piña will enchant the Caribbean
This musician from the mountain region will be performing at the Caribbean Culture Festival 2015 in Quintana Roo which takes place Nov. 3-22. Celso Piña, better known as "the rebel of the accordion", will have the Mexican Caribbean dancing to la cumbia on November 14th, in Isla Mujeres, sharing the stage with Pato Machete.
The rhythms of this singer, composer, and arranger and icon of Mexican popular music in recent years, has confirmed his performance the festival. They will be bringing their distinctive sound that has enriched the cumbia with touches of other popular rhythms such as ska, reggae , rap and hip hop.
A born Musician, self-taught skill on the accordion, Pina provides a value beyond what is musical, and he represents an emblem of cultural Mexico today. This was demonstrated in the documentary film which he starred in, for the channel 11-one, and reinforcing the image immortalized in literature by  Garcia Marquez, dancing to the rhythms of cumbias which are proudly made in Mexico.
So, the festival of culture in the Caribbean, it enriches the purest style "Sonidero" with the presence of the musician who, for 25 years, has been one of the stars of the stage of the genre of cumbia.
http://youtu.be/sY2HcLtJS1k


Sunday, Nov. 15 at 7pm, there will be a performance by the Ballet de Danza Folclórica de México, followed by Belizean band Timbalaye, and a performance by Charanga Habanera; whose leader David Calzado is known for the hit “Gozando de la Habana”.