THURSDAY NIGHT....Our Northern Zone remains in Orange on the state epidemiological light, as does the Southern zone thru July 11th. The Governor expressed concern about our Zone's Contagion Rate increasing from 1.03 last week to 1.06 this week, noting the Southern Zone has dropped below one. He said the state's most populous municipality of Benito Juarez (Cancun & Puerto Juarez) is experiencing 150 cases daily. He advised Isla Mujeres to follow habits of hygiene, noting the increased cases.  (Playa del Carmen is in Solidaridad & Holbox is in Lazaro Cardenas). 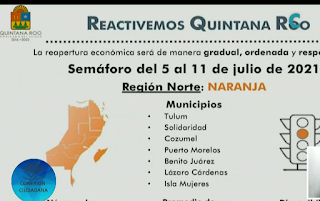 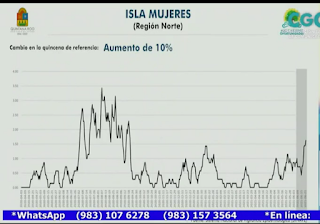 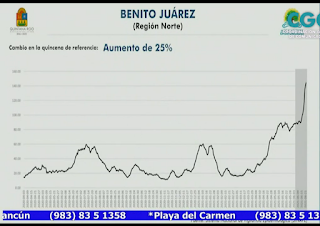 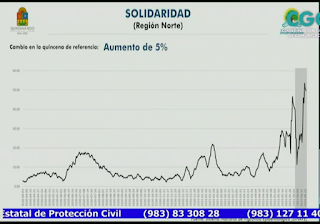 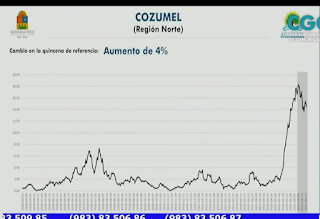 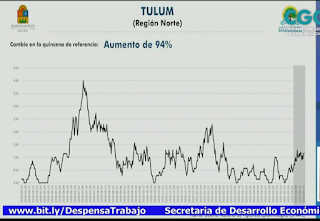 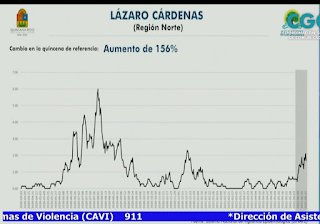 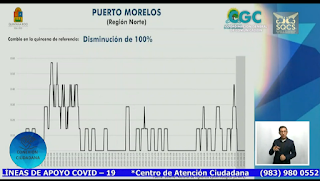 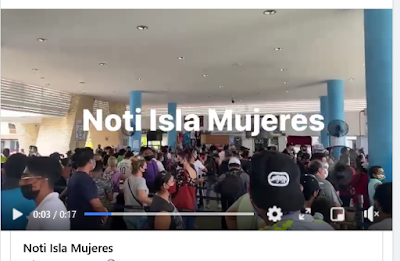 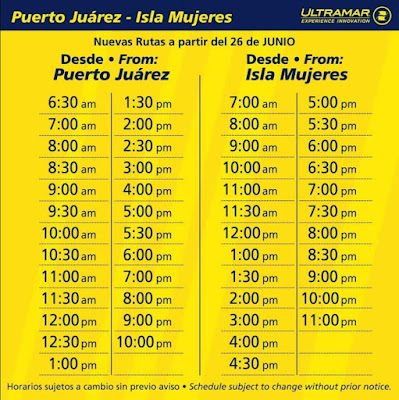 THURSDAY, July 1---The municipal Director of Civil Protection & the Firefighters posted a video of himself with a screen-presentation explaining that while our area was being affected by low pressure areas with squalls, Tropical Storm Elsa was about 3900 kilometers to the southeast, in the Atlantic. It was expected to enter the Caribbean Friday night, with a projected trajectory over Cuba Sunday night/early Monday, without expectations of a a major effect on the Yucatan Channel & our coast, except rain. He reminds everyone that Elsa was a Tropical Storm, not a hurricane, and was apparently heading toward Florida. He advises staying informed via official sources for any changes in trajectory or strength, and to avoid rumors. (I also posted reports on Wednesday). 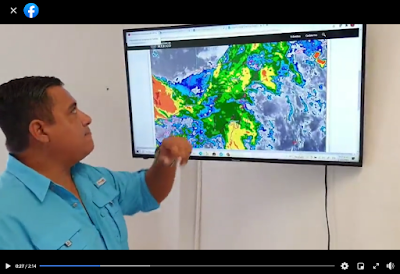 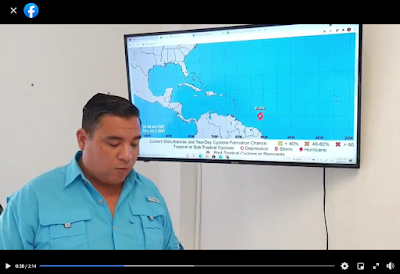 THURSDAY...ON THE MAINLAND--- (Video) The Governor announced that four provisional lanes will be constructed within the next 60 days to accommodate traffic between Cancun & Tulum, using funds from FONATUR (National Fund for the Promotion of Tourism). They will provide an alternate to Federal Highway 307, where sinkholes have developed. The new lanes will be built on the CFE (Federal Electric Commission) easement beside the highway, which is 40 years old. Geophysical studies are ongoing on Hwy 307, which will require in-depth engineering to support vehicular traffic, as well as for the Mayan Train.

THURSDAY AFTERNOON...Today, Isla Mujeres reports a total of 339 positives with 36 deaths and 281 recovered. The Geoportal reports one active case in Miraflores. There have been 12,502 doses of C-19 vaccine administered in the municipality of Isla Mujeres, and over 700,000 in the state.

This week, our Northern Zone reports its Growth Rate of Cases has been 0.63, which compares to 0.6 last week, and the weeks before were 0.59, 0.55 and 0.58.
Our Northern Zone remains in Orange thru July 4th, with the next update tonight around 9pm, for July 5-11. This is unchanged since May 3, when capacities were officially reduced from 60% to 50% at hotels & restaurants, and to 30% at public beaches. 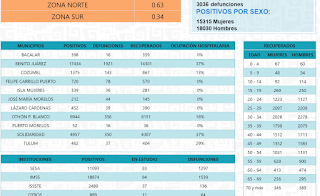 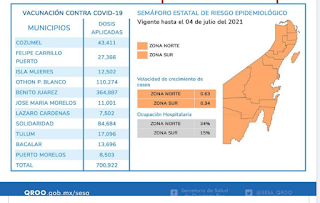 THURSDAY....Isla Mujeres remains in "Green" on the official Naval Sargasso report for today, where "Encaso" means "Scarce". The Q Roo Sargasso Monitoring Network continues to give the island its best rating, which is Blue, "without sargasso". 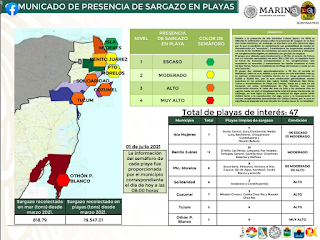 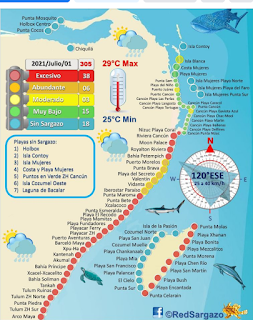 TVisla Mujeres reports there are grates over the the storm drains which are in need of repair, noting they can be especially dangerous when they are covered in water and the broken areas aren't visible.

FRIDAY....Hurricane Elsa is expected to decrease to a Tropical Storm over Cuba, on Monday, before heading toward Florida, staying east of the Yucatan Channel. 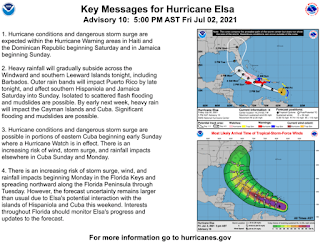 FRIDAY...The Director of the Tortugranja, Deline García Canto, reports there are 124 nests being protected at the facility, with a total of 14,387 eggs. There are four Hawksbill nests with 552 eggs, 22 Loggerhead nests with 2,481 eggs, and 98 Green turtle nests with 11,354 eggs. Although this is expected to be a slow season (because the last two were busy), the numbers have almost tripled in less than 15 days. 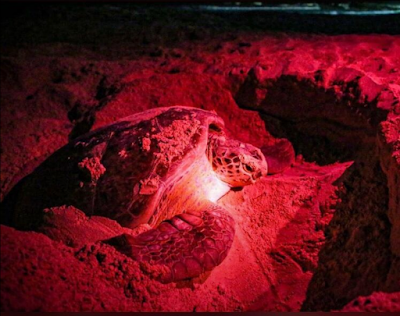 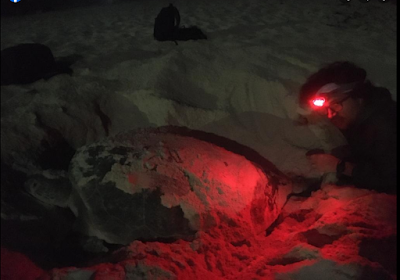 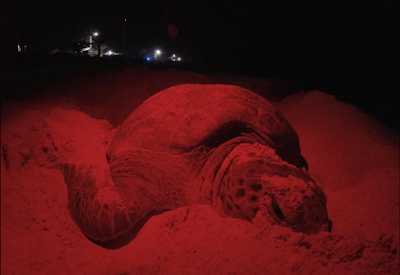 TODAY....The Xcaret company has confirmed that two ferries will be arriving from South Africa, which are intended for transporting passengers between Isla Mujeres and the mainland. There is talk that they will seek to operate between the island and the Cancun Hotel Zone, and the company has not said whether they will provide service between the isle and Puerto Juarez.

At this time, it is said that no contract exists between the state port authority (APIQRoo), but they have been approached about port services and ticket offices at Isla Mujeres. If this project is realized, Xcaret's new boats would provide direct competition for Ultramar.
The ferries arrived in New Orleans yesterday, July 2nd, and should arrive in Progreso, Yucatan soon. They are 47 meters long and 11 meters wide, named “Xcaret” and“Xel-Há”.