For July 29-25, our Northern Zone remains in Orange, as does the Southern Zone. The Contagion Rate for our Zone has risen to 1.1, and Cancun is reporting about 200 new cases daily. The last graphic is a comparison of the states, from best to worst. 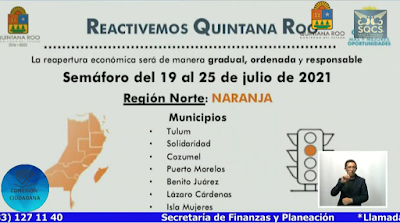 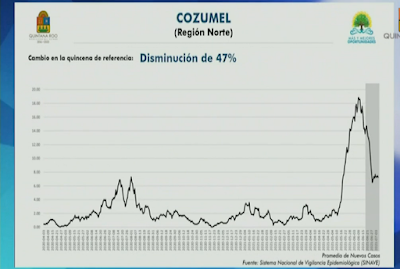 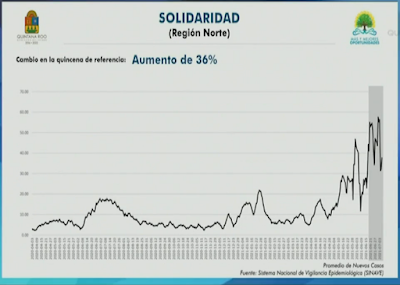 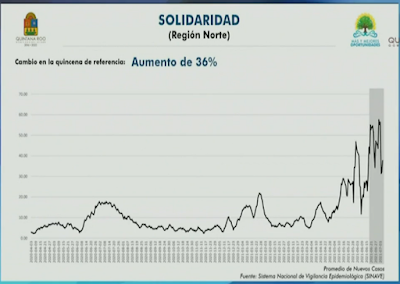 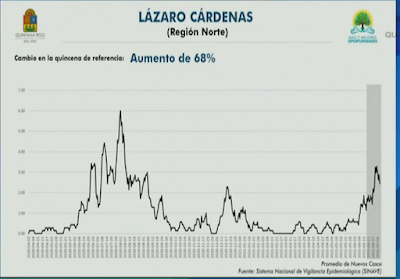 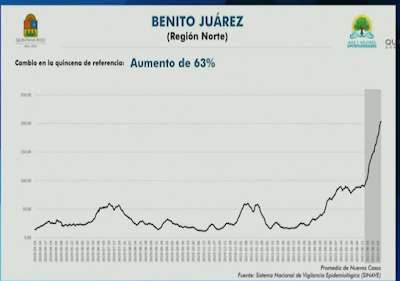 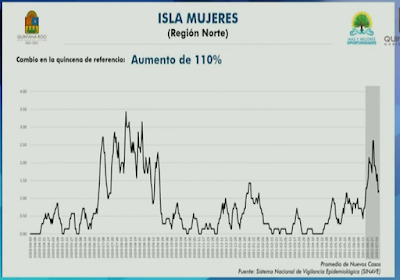 WEDNESDAY....At the National Park of Isla Contoy, more than 2000 coral fragments have been transplanted and seeded thanks to the hard work of volunteers and park personnel. 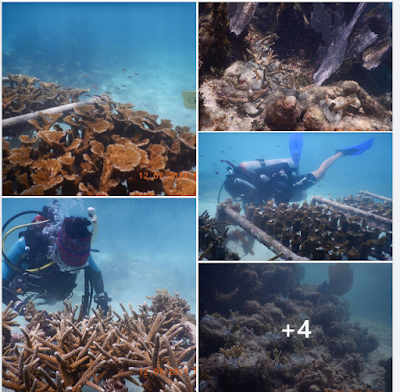 TUESDAY....The boat sinking near Punta Sur resulted in the unfortunate deaths of a five year-old child, a 32 year-old woman, and a 45 year-old person.
The boat "Rosa Coral" sank in the Caribbean Sea off the coast of Isla Mujeres, near Punta Sur. The Harbor Master and Navy activated search and rescue protocols, and boats with the various fishing cooperatives joined the search, but an hour later the bodies were found a mile and a half from where the boat sunk. It is reported that there were 13 people aboard, including the crew and passengers. Photo David Daniel On Thursday July 15th, the two "Jetway" ferries will finally begin providing passenger service between Isla Mujeres and Puerto Juarez, at lower prices than Ultramar, according to Pablo Medina, Jetway's Commercial Operations Manager. He said the delay is associated with the dock they planned to use in Puerto Juarez. While that case continues, they will depart from the Puerto Juarez Maritime Terminal.
The schedule and prices will be released tomorrow. Mr. Medina said the ferries conducted test cruises today, although they completed their docking tests some months ago.
The two "Jetway" ferries have been repainted and refurbished since they were Magana ferries many years ago, and then the Marinsa company operated them between the island and Puerto Juarez. Photo Noti Isla Mujeres

TUESDAY....The "Canícula" begins this week in Mexico, aka "the dog days of summer". Today around noon, a tourist from California, Luis Miguel F., 61, was walking along the sidewalk by Playa Centro with a friend, when he fainted from heat stress. His friend asked a police officer for assistance, who called the Red Cross paramedics, and staff from the nearby Marko Mobile C-19 testing unit provided help. The man regained consciousness after a brief period and was treated by the Red Cross paramedics who determined he did not require transport to the Community Hospital. The reporter notes that there was a blazing sun with hardly a cloud in the sky and the thermometer read 32 C, with a heat-sensation of 38 C. (89.6 F and 100.4 F). Photo Cambio 22 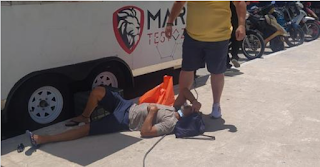 Monday....It says from tomorrow, Tuesday July 13 thru Friday, July 16, residents 40-49 years old can receive their second vaccination against C-19 at the Bicentennial Dome in colonia La Gloria from 8am to 6pm. They should bring copies of their CURP, a current utility bill and the documentation from their first vaccination. 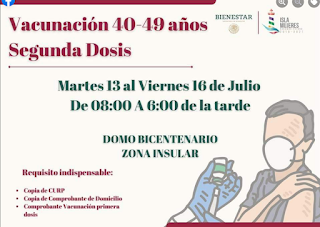 Here's the age breakdown for second vaccines for the 40-somethings. I'm pretty sure that's a typo on Wednesday. It says it's necessary to bring your document from your first vaccine, to print out your registration form from the mivacuna site using your CURP, and don't forget to bring copies of your CURP and utility bill. Tomorrow thru Friday, at the Bicentennial Dome in La Gloria, 8a-6p. 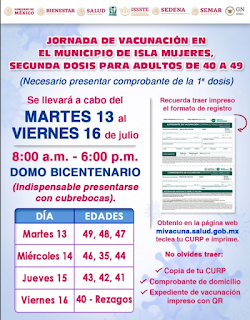 Isla Mujeres welcomes visitors with open arms and invites them to enjoy its beaches, which include three that have received the distinctive "Blue Flag" certification. For the enjoyment of residents and tourists alike, the beaches are kept clean by crews with the ZOFEMAT agency (Zona Federal Marítimo Terrestre) who work Monday thru Friday from 5am to 10am removing any sargasso that arrives and collecting trash. There are also guards on the weekends working from 7a to 10a. Source--Ayuntamiento de Isla Mujeres 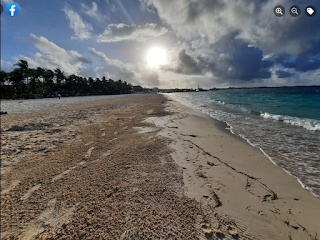 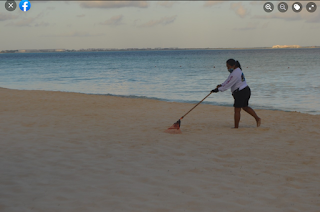 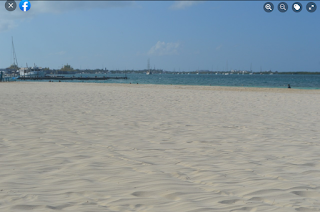 Isla Mujeres is one of the favorite destinations in the Mexican Caribbean, with both national and international tourists, because of its natural beauty, its white sands and turquoise water, as well as its gastronomy and the warmth of its people.
Playa Centro and Playa Norte are both certified with the quality standards of the distinctive Blue Flag, and the latter is among the top 25 beaches worldwide on the TripAdvisor website. Isla Mujeres is the only island in Mexico's Pueblos Magicos program, providing an additional appeal to the thousands of vacationer who arrive to this destination daily.
Due to its geographical location, during this current season of sargasso arriving, it is one of the few places where the beaches are free of sargasso. This is also due to the commitment and dedication of the crews who work every day to keep them clean.
Source--Ayuntamiento de Isla Mujeres 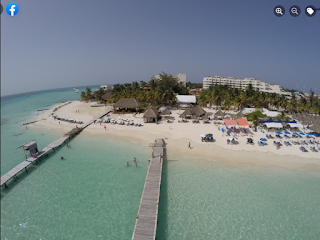 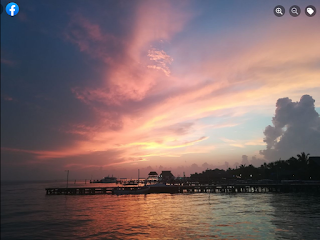 FRIDAY....Two ferries, "Xcaret" and "Xel-ha", have arrived to the Cancun Hotel Zone, plannnng to end the Ultramar monopoly. These ferries will provide service between Isla Mujeres and Cancun from the pier located next to the Teatro de Cancun and Calinda Bridge.

Ultramar currently provides daily passenger service from the Cancun Hotel Zone via 6 crossings from Playa Tortugas, and 3 each from El Embarcadero and Playa Caracol. Ultramar also has 25 crossings daily from Puerto Juarez. The Ultracarga vehicle ferry from Punta Sam has 3 daily round trips, with 4 on Friday. Photos... 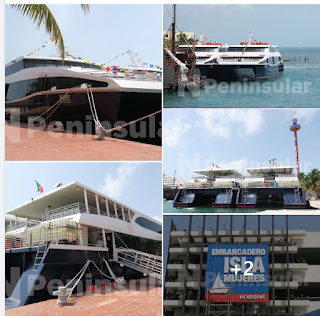 IM Noticias reports there are complaints and concerns about jet skies at North Beach and it notes that the rental of jet skis in this area and in the Marine Park is not allowed. The photos are from last Sunday, and the article claims there were dozens of jet skis traveling at fast speeds among the boats, and in some cases among the swimmers. It says they pose a serious danger to all the people and boats who are focused on having a good time at this Isla Mujeres beach. "The worst part of this situation is that, after several long hours staying at North Beach, the vast majority of them are drunk, and driving these jet skis drunk, without any sort of caution...." It is requested that the municipal or maritime authorities intervene, before there is a serious accident or someone dies. Photo IM Noticias 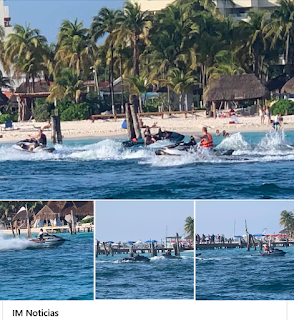 As of yesterday, there has been a total of 351 officially reported cases of C-19 in Isla Mujeres, with 37 deaths and 295 recovered.
>>There have been nearly 13,000 doses of C-19 vaccine administered in the municipality of Isla Mujeres, and nearly 800,000 in the state.
>>This week, our Northern Zone reports its Growth Rate of Cases has increased to a new high of 0.73 which compares to 0.63 last week, and the weeks before that were 0.6, 0.59, 0.55 and 0.58.
>>Last night the Governor announced that our Northern Zone remains in Orange status on the state epidemiological light thru July 18th, which is unchanged since May 3, when capacities were officially reduced from 60% to 50% at hotels & restaurants, and to 30% at public beaches.
>>The second graphic shows the increases (Augmento) and decreases (Disminucion) by municipality, as of yesterday. (The individual graphs were posted here last night.)
>>The last four graphics list Q Roo's strategies to avoid going backward to the Red status on the state epidemiological light.
>>The first concerns reducing mobility and says: Closure of principal streets in Cancun, Playa del Carment and Tulum from 12am to 5am; Sanitation of public transportation and locations (including their terminals) that function as sanitary filters; Sanctions against those that don't comply with permitted capacity; Sanitizing of ferries and boats and complete respect to their capacity; Use of hygiene habits and personal protection at all times.
>> #2 is titled "Filters & Sanitary Bubbles" and says: Increased administration of rapid antigen testing in the colonia neighborhoods; Establishment of "sanitary bubbles' at tianguis (flea markets-informal/open markets.); Establishment of sanitary filters requiring antigen tests of all attendees at events with more than 150 people such as fairs, competitions, congresses, expositions, and tianguis.
>>#3 is titled "Vaccination" and says the vaccination of workers in the tourism sector should be a national priority and that the state government is negotiating with the federal government for vaccines for this sector to facilitate progress in the opening of the economy and confidence in our destinations.
>>#4 is titled Social and Political Actions and says: Sanctions against large social meetings, Mandatory use of face masks, Speaking to the political parties to avoid agglomerations. 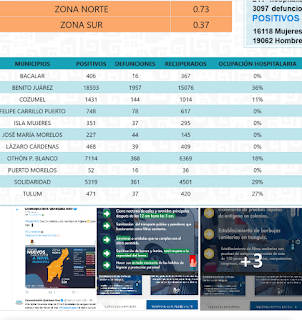