As of 4/24, Isla Mujeres continues to report a total of 282 cases of C-19 with 249 recovered, but unfortunately the total number of reported deaths has reached 30. The state geoportal continues to show zero active cases on the island.

The C-19 vaccination campaign administering second doses to residents 60 and older will take place Monday thru Thursday, 8a-5p at the Bicentennial Dome in colonia La Gloria. Bring a copy of your CURP & the voucher from your first vaccine. Face masks are required and officials say they have enough doses for all the seniors in the municipality & there is no need to line up the night before. 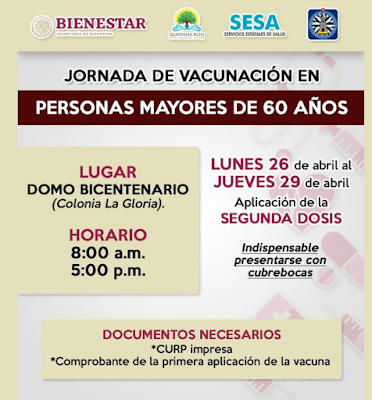 Tonight's a Nearly Full Moon night. Tomorrow morn it sets at dawn over the mainland--Moonset-is 6:01a and sunrise is 6:19a.
Tomorrow, the full moon rises at 6:57p over the Caribbean & the sun sets at 7:10. The moon sets on Tuesday morning at 6:46a, after sunrise, but is scenic in the predawn colors.
Tues, the moon rises at 8:04p
Wed. at 9:12p, Thur. at 10:20p, and Fri. at 11:25p
Sunrise is ~6:19. Tomorrow morning the full moon sets at 6:01 and on Tuesday it sets at 6:46.
The first pic is a moonrise at sunset over the Caribbean from Maravilla Caribe Bed & Beach. The second is a moonset at sunrise over the Bay from El Milagro, by Ingi Frigata. 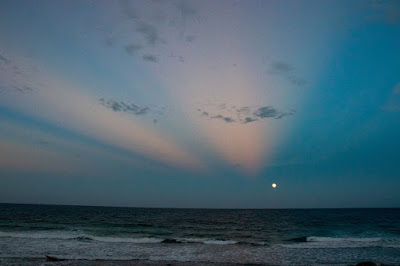 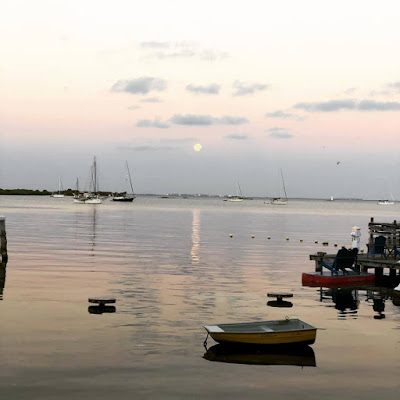 Friday morning-- The Governor said that both regions of the state remain in Yellow on the epidemiological light thru May 2nd, but the number of infections and deaths from C-19 increased as a result of the Easter holiday, and we must keep up our guard to avoid returning to Orange.

As of April 22, Isla Mujeres reports a total of 282 cases of C-19 with 27 deaths and 248 recovered. The growth rate for the Northern Zone is 0.23. The geoportal for 4/22 shows no active cases.
The Governor said that vaccinations for teachers will start May 19-28. There is no date set for returning to school, but they will be reviewing that next week.
He said they will keep everyone updated on the Federal government's vaccination plans, and it is likely that C-19 vaccinations for those 50-59 years old will begin between the first and second week of May. 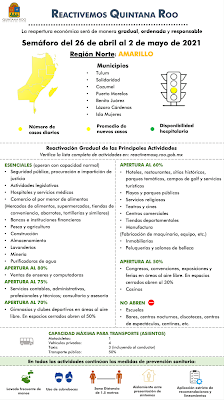 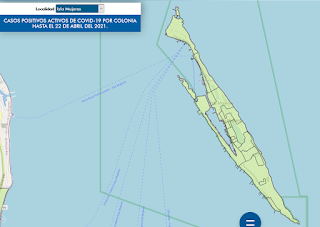 Last week--Donations of diabetic testing supplies and meters for the Community Hospital. Thank You! Caption...

The Isla Diabetes Clinic continues to collaborate with the Community Hospital. Under the direction of the management of the hospital represented by Dr. Leily Osorio Mares, we replenished the supply of all the equipment needed to detect diabetes benefitting the entire community. 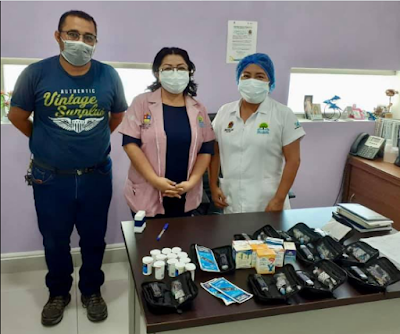 The City FB site isn't publishing in accordance with election laws and should resume after the election on June 6th.

On a FB video 4/18 by TV Isla Mujeres, the reporter says the CFE (Federal Electrical Commission) transformer fell and personnel with the municipal Department of Civil Protection are cleaning away the oil from avenue Rueda Medina. The taxista says it fell about 20 minutes earlier. No one was injured in the incident. Screenshot from TVIM video-- 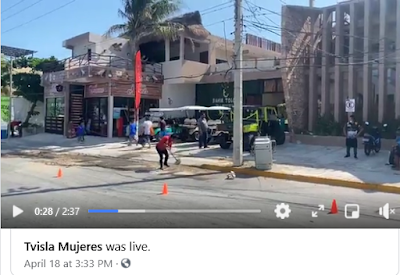 This is one of the most-photographed vistas on the isle, admired by visitors from all over the world and cherished by residents. Many are concerned and unhappy that apparently a restaurant is being constructed at the site.Photo by Isla Mujeres al Dia. 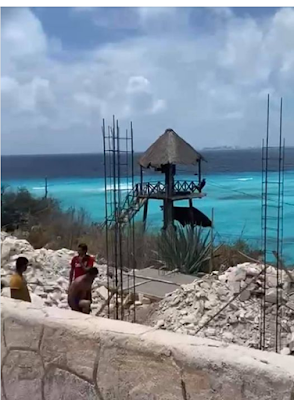 Yesterday--IM Noticias reports that two suspects are in custody who were allegedly involved in the execution-style murder on Thursday night. Areas of two buildings have been secured where authorities found large amounts of what appears to be marijuana and large guns. One house is located in Ampliacion la Gloria & the other is near the Community Hospital. Officials clarified that only specific rooms are secured, and neighbors living in other quarters have access without problems. Two people escaped by jumping out of the back of one of the houses during the operation.

It is reported that the murder victim was an islander and his body has been turned over to his relatives. Of the three people detained following the incident, one was a homeless man who alerted the police and the two suspects who were arrested include a 16 year-old. The investigations continue.

Wednesday, April 21 Lyrid Meteor Shower peaks, but there will be interference from the moon until it sets at 2:50am. The morning of the 23rd may be decent also, but the window is narrower between moon set at 3:50 and sunrise. 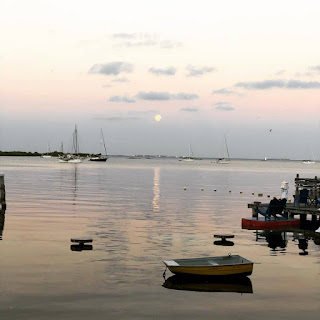