Isla Mujeres History on Facebook & Website
On Saturday, April 3, Isla Mujeres continued to report a total of 281 cases of C-19 with 25 deaths and 240 recovered.
The state geoportal still has the information for 4/2 which continues to report one active case in colonia 23 de noviembre.

On Monday, March 29, the reported Growth Rate of cases in our Northern Zone increased from 0.15 to 0.19. 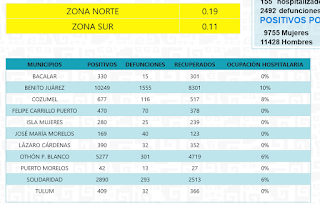 On Thursday, April 1st, the state 224 peso tax for foreign visitors went into effect, and the "Visitax" website has been activated to facilitate payment before or during their visit. The first graphic explains the steps & the second graphic is an example of the proof of payment which must be presented at the airport prior to departure from Quintana Roo. If it's not completed in advance, tourists will receive assistance with it at the airport. The third graphic explains that this payment can be safely made http://visitax.gob.mx/ & the requested information includes the number of people traveling, name & age & passport # of each individual, & departure date. For families or groups, a single payment can be made for everyone, as long as each person's information is provided. 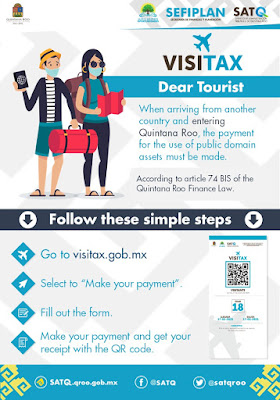 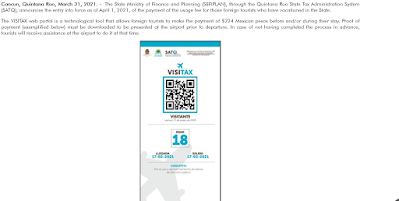 Funnel cloud over the Caribbean on Thursday, April 1st...photo by Bruce Roberts. Our weather is being influenced by a "norte" front (from the north). 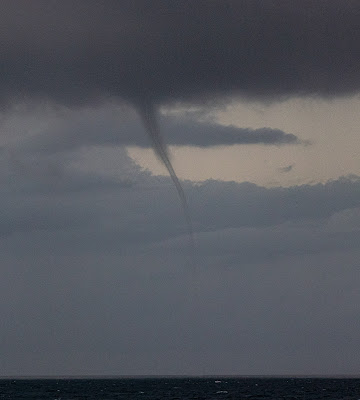 Thursday, April 1- Our Northern Zone remains in the Yellow status April 5-11 (as does the Southern Zone) and the Governor reminds us that it is especially important to maintain protocols for the prevention of C-19 while many tourists will be visiting for the Easter holidays. 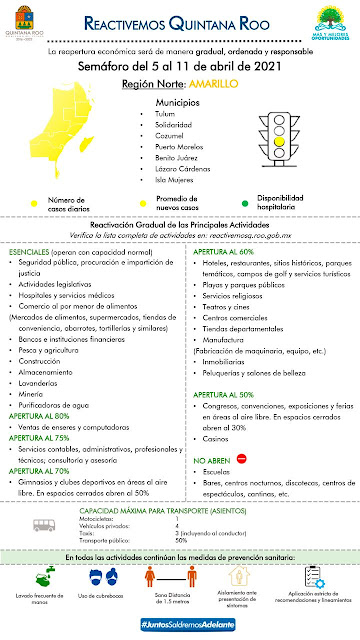 There are many boats visiting Playa Norte! The poster says the tour boats should pay a fee, because they benefit from bringing tourists here, but include food and drinks in their tours, and don't leave behind an economic benefit for the island.
Photo by Virgilio Fernandezmagaña, published on Facebook by IM Noticias

Wednesday, March 31 Unfortunately, a tourist from Wisconsin, "Roberto L", 43, drowned while on a snorkeling tour at Isla Mujeres. The visitor, who works as a manager had been eating before going in the water, and then he began to feel badly. The crew brought the boat to a downtown pier, but the Red Cross paramedics were unable to get a response. The report says he apparently died from bronco-aspiration while snorkeling. He and his wife were staying at the Moon Palace Hotel in the Maya Riviera, and were aboard the tour boat “Águila Blanca” (White Eagle) from Puerto Juarez. Personnel with the state Attorney General's office arrived at the scene for the corresponding procedures. Source-Noti Isla Mujeres.

On Wednesday, March 31, Isla Mujeres reported a total of 281 cases of C-19, with 25 deaths and 239 recovered. There has been a total of 6 reported cases this month, while 5 was the lowest number, in April & November, and the most were 75 in August, 50 in July, 41 in October, and 26 in January.
The state geoportal for 3/31 continues to report one active case in colonia 23 de noviembre. 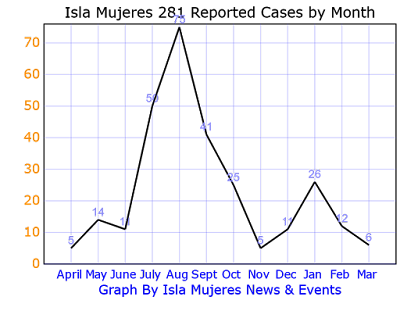 This fabulous moon photo is by Jim Guy, thanks! 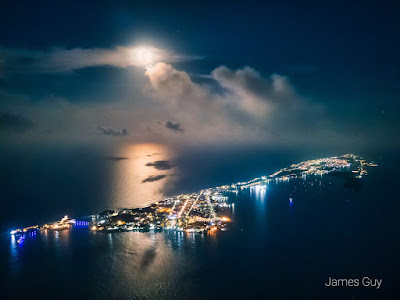 March 28--Admittedly a 200% increase in average new cases is a bad trend, but a look at the larger perspective is more encouraging. Officially, we've only had 8 new cases in the past SEVEN weeks. There were 35 cases in the FIVE weeks before that. To recap....
The year began badly with a spike of 5 new cases on the first, and a total of 23 for January. Then 9 more cases by Feb 6th, for a total of 35 cases in the first five weeks (+1 day) of the year. Then cases slowed down with only 8 in the past seven weeks, from Sat. Feb 6 to Sat. March 27, yesterday.
There were five deaths between Jan 1st and Feb 10th, and none since. The official totals are currently 280 cases and 25 deaths.
The bar graph shows new cases by month. The state graph shows the AVERAGE of new cases in 5-day intervals, giving increases & decreases in percentages. (So when there were no cases in five days and then two new cases over a five day period, that is a 200% increase.) Both reflect the officially reported cases, which is lower than the actual number of cases, due to the criteria for inclusion in the official statistics.
Our Northern Zone experienced a spike following the Christmas-NY holidays, that put us in Orange status for a month. We are entering the Easter holidays with averages increasing statewide, and the state and local governments have responded with plans for increased monitoring of compliance with protocols. 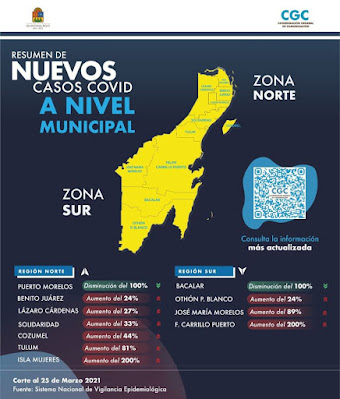 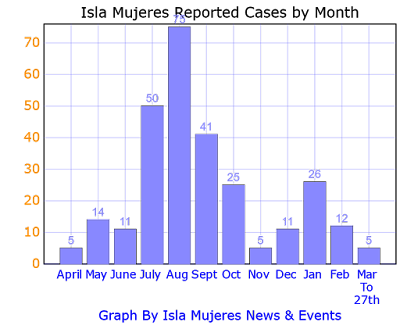 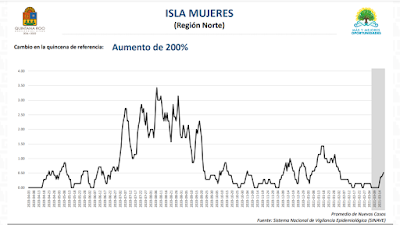 March 28--The Governor reports that COFEPRIS will increase inspections of establishments and service providers during the Easter holiday. He said that 407 establishments have received suspensions this year for noncompliance with C-19 protocols. To avoid closures & fines--follow the health care measures.

March 27--This morning's race along the eastern malecon was a success with 50 participants, who participated in the 5k and 10k categories. The municipal-sponsored event was free for participants and carried out with the recommended protocols for prevention of C19.

Photo by Jim Guy, thanks!! 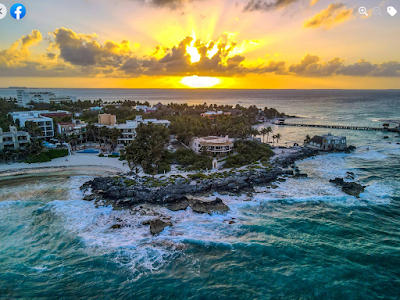 March 26--City officials inaugurated the Easter holiday security operations and Semana Santa Vacation Season Committee 2021 today, to ensure a safe and responsible holiday for inhabitants and visitors. Municipal official Juan Román Martín Pérez was accompanied by officials from all three levels of government.He spoke at the event about how 2020 totally changed activities and lifestyles in the face of the coronoavirus health contingency, but with the work and participation of the islanders, the pandemic has been fought with great responsibility, so that thanks to this enormous effort, today we are ready to offer a safe destination for the thousands of visitors during the Easter holiday season of Semana Santa.
The municipal Easter Vacation Season Operation 2021 has a mission to take care of the health of residents and visitors of our municipality, in addition to ensuring the beaches and streets are safe. We do this with support from the Navy, municipal police, Red Cross, Public Service personnel, APIQRoo, Civil Protection and the Firefighters, as well as representatives with CFE (Electric company), ZOFEMAT (Federal Zone agency), the General Hospital, and Aguakan. He emphasized the importance of continuing with social distancing and the hygiene measures recommended by the authorities, in order to keep moving forward.
He said there will be ongoing patrols and they will intensify prevention and the safety filters (checkpoints) for carrying out sanitary measures. They will also be frequently reviewing documents of motorcycles, cars and golf carts. At night they will reinforce the patrols of surveillance and prevention with staff from the Navy and their dogs, as well as random breathalyzer reviews. He said, "We seek to return to the activities we had before the pandemic, with order, responsibility, and a high degree of awareness."
The Director of Civil Protection, Merced Ortiz Maya, emphasized that security and responsibility during this season is fundamental. He pointed out that 2020 has been one of the most difficult years in the world, due to the Covid 10 pandemic, and in Isla Mujeres we have faced it working together. Now it is time to demonstrate that we are ready, standing strong, to offer the natural beauties of the island and to reactivate with responsibility during the vacation period, taking good care. He concluded, "We cannot let our guard down. We must continue to carry out health precautions during this Easter season. We must be emphatic with restaurants, merchants and service providers to continue to take preventative measures and avoid an increase in the disease. For our part, we will work as a team with various units to preserve order in the streets and beaches of Isla Mujeres." 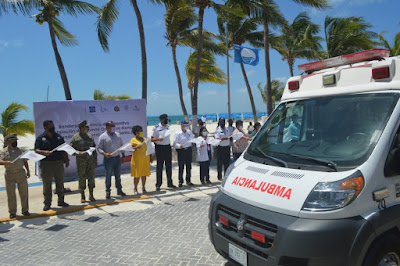 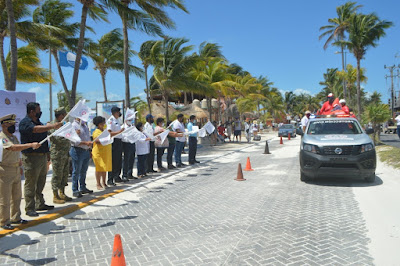