New street signs are being installed throughout the municipality. The Mayor, Juan Carrillo Soberanis, said that 70 stop signs and 90 street name signs are being installed in the colonias of  La Gloria, Ampliación La Gloria, Miraflores and Lol Beh. This will facilitate traffic and the location of addresses and places of interest in isla Mujeres. He said, "This work being carried out via SEDATU, (the Department of Agrarian, Territorial and Urban Development) and the federal Habitat Program, with a total investment of 1,215,772 pesos from the federal and municipal governments."

3-way soccer tournament at the colonia Salina Chica soccer field (between the Navy, Harbor Master, and Islanders).
May 27 & 28 Friday & Saturday at 8pm
May 29, Sunday at 10:30a Finale

This information was translated yesterday.

This information was translated yesterday.


Disagreement over coastal land
Invasión y despojo de predio costero. [+] Ver masFull article at this link
There is a disagreement over a piece of land along the coast, behind the Middle School, involving a 250,000 peso debt, between fisherman Mateo Burgos Garrido and businessman Alvaro Burgos Rios. The fisherman acknowledges the debt, because he has borrowed money at various times in recent years for health reasons, and says he is willing to pay it back, but that Mr. Alvaro Burgos refused. He denies that he has signed anything to transfer the land or change the name on the title, and he has notified the local APIQRoo (state Port Authority) representative Rosa Elena Rios of this. He showed this document from March 17th, and said he has appealed to other state agencies as well. The fisherman said, "He says he has my transfer signature that I made in Campeche. I am not familiar with Campeche. That's a lie."
In recent years, Mr Alvaro Burgos was involved in controversy at the fishermen's cooperative "Patria & Progreso", when he wanted to obtain possession of that property, which is a few meters from this property.


Low occupancy
Baja ocupación, por alza de tarifa de barco [+]i.. [+] Ver masFull article at this link
A receptionist at a local hotel said occupancy is low because people see that it is expensive to visit this destination and choose to go to other places in Quintana Roo. This is attributed to an increase in ferry rates by 100 percent, plus increases in rates at some hotels and restaurants
Now a Mexican family of three cannot vacation for the weekend on 5000 pesos, because a three star hotel costs 1000 pesos a night, instead of the 750 it cost last year. The round trip ferry trip that was 150 pesos per person is now 300 pesos. In addition, food and beverages cost more now.
Some hotels prefer to have temporary closures for general maintenance, and reopen during the summer vacation season, including Marcianito, Xbulu-Ha, and Vistalmar, though there are rumors the latter could undergo demolition to make way for luxury accommodations.

May 27  The skies were partly cloudy on Saturday, and the 4pm forecast indicates this could continue on Sunday, with southeasterly winds at 30 to 40 kilometers, with higher gusts, which would not be favorable for small boats. There were fewer passengers on the ferries from the Cancun Hotel Zone and Puerto Juarez, but good activity was maintained at Punta Sam, where visitors who stay hotels are aware of the attractions of the island.
At noon, the more than twenty golf cart rental agencies had not leased even half of their carts, except those that have contracts with agencies. There were not many customers for the dive shops or the lanchero (small boat) tours. Business was better for the boats from Puerto Juarez who have the advantage of including the crossing in their packages, which is more attractive to families versus paying the high cost of the ferry, and then paying for a boat tour. 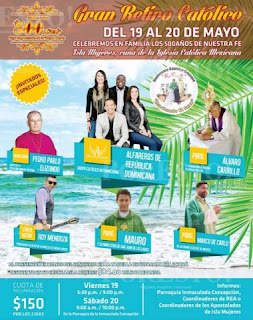 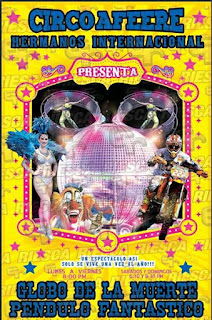 3-way soccer tournament at the colonia Salina Chica soccer field
May 27 & 28 Friday & Saturday at 8pm
Sunday at 10:30a Finale

Saturday, May 28 Race of 6km along Rueda Medina, which starts at 7am by the Fishermen's Monument and ends by the Naval base. Register at the Institute of Sports and Recreation, first 100 registrants will receive a medal. 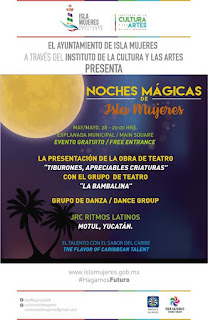 Wednesday, May 31
Quintana Roo Symphony Orchestra performing Maya Opera Concert in the hall of (beside) the Immaculate Conception Church at the Town Square at 8pm

Thursday, June 1 Navy Day  Día de la Marina
Memorial placing of the wreath at sea (in the Bahia). Boats leave the pier near the car ferry at 10:30am