ISLA MUJERES, 12 de abril.-
Leer más.Full article at this link..
A ten ton trash collection truck was delivered for the Continental Zone and a four ton trash collection truck was presented to the island. Work is also being done to patch the streets, which will benefit about 13,000 residents of the Island and the Continental Zone. The Mayor recognized the great work done by the personnel of the departments of trash collection, street cleaning, and street repair, which helps the island to give its best impression to visitors. During the Easter holidays the municipal police and traffic police have also increased their operations.
"All of us who make up this administration are determined to comply, to respond to the requests of citizens and to do the best work possible. We will continue to work for increased and improved benefits for the island's citizenry and to continue as a Pueblo Magico which is a clean and safe destination for those who visit us, " said Mayor Carrillo Soberanis.

Fines for some motorcycle owners

ISLA MUJERES, 12 de abril.- .
Leer más..Full article at this link.    In recent days the officers of the municipal Traffic police have removed plates from more than half a dozen motorcycles. This caused some concern among other motorcycle owners since the fine is several hundred pesos, and sometimes the vehicles can be impounded.  However, the Director of the Traffic police, Carlos Pech, explained the plates were removed from scooters and motorcycles whose owners were not licensed to drive.
There are motorcycle owners who do not yet have their plates, but who have paid their renewal fee, who would only have to show their payment receipt to officers with the municipal traffic police. Delivery of the plates is being carried out by the office of Revenue Collection.
Personnel in the office of the municipal Traffic police say they have received about half a dozen reports in recent days of thefts of new plates from scooters.

The island received a four ton trash collection truck, and now has five vehicles covering six routes. This was made possible by coordinated work between the municipal and federal government via the Secretary of Agricultural, Territorial, and Urban Development (SEDATU) thru the Habitat program.
The street repair program is expected to benefit 7000 inhabitants of the island and 6000 in the Continental Zone.  It will include a total of 600 linear meters, of 3-5 centimeters of thickness of concreto asfáltico/ concrete asphalt to cover 4852 square meters. The Mayor spoke about his commitment to provide quality public services and improved streets and avenues for the benefit of the residents of the municipality.


Increased surveillance on Isla Mujeres beaches for Easter holidays
http://www.tvislamujeres.com.mx/redoblan-la-seguridad-en-p…/
Ulises Berman Graniel, director of the Municipal Department of Civil Protection, said that during the Easter holiday they have increased surveillance at 7 points on the beaches to protect the swimmers, as part of the Easter Holiday Operations 2017. He explained that there are lifeguards monitoring swimmers in the areas of Playa Centro, Playa Norte, Hotel Mia, and La Luna from 11am to 6pm, when the highest number of tourists are visiting the beaches.
He said, "Authorities with the three levels of government are working via various agencies to ensure the safety of vacationers, and we are increasing our presence in the areas where there are the most visitors, such as the beaches and downtown."  He commented that the City has placed a buoy line at Playa Centro and Playa Norte to separate the swimming area from the navigational zone, so that the swimmers can enjoy the waters of the Mexican Caribbean safely.
He added that this weekend it is expected that the island will receive between 2000 and 3000 visitors per hour by sea between 9am and 6pm, which warrants an increased presence of personnel who can provide assistance or first aid.


Ultramar wanted 40 golf cart plates
Ultramar quería 40 placas de carros de golf [+] Ver masFull article at this link
The Isla Mujeres delegate for SINTRA, Jorge Martin Alvarez, confirmed that Ultramar had requested approval for license plates for 40 golf carts, but the request was denied because this would worsen the problems of traffic congestion.
As of the end of March, only nine plates had been approved from a long list of requests and 260 were not authorized, because otherwise the number of rental carts would exceed 1000. Therefore, the SINTRA register indicates there are 763 rental golf carts in circulation during this Easter holiday season, according to the official.
The list of people who have golf cart rental concessions and authorized plates includes former mayors and state politicians, and there are complaints about the growth in the number of these vehicles in the past six years. The request for plates by former mayor Agapito Magana Sanchez was among those denied, but no cancellation document was shown to the reporter.

Terminales marítimas a reventar. [+] Ver masFull article at this link
There are about 20,000 users daily of the two terminals administered by the Port Authority APIQRoo during this Easter holiday period, with the vast majority being tourists who visit Isla Mujeres for several hours. Most are going to Playa Centro and Playa Norte, or to find golf carts to rent to tour the isle.
These 20,000 passengers do not include the visitors who arrive on boats that take their customers to the private piers downtown or to recreational sites like El Pescador, or those in Sac Bajo and Punta Sur.
As of midday Wednesday, personnel with the Navy, Civil Protection, and Tourism were reporting a "saldo blanco" (no incidents). Swimmers were advised to be cautious in the western area of North Beach due to a marine current which occurs there. Parents were advised to take care of their children, and to keep them nearby. No thefts from tourists on the beaches were reported. The largest numbers of visitors are expected Thursday, Friday, Saturday, and Sunday. 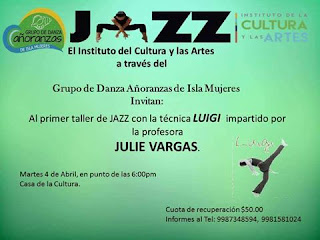 Isla Brewing Company says: Where can all your dreams come true? The Artist Fair at the Casa de Cultura has it all. Awesome Art, Delicious Food, Cold Beer, and Great Music. This week’s musical guest is Kiritz Reggae, 6 – 8, everything is IRIE
Thursday, April 6   6pm
You are invited to an event about the workshops available at the Casa de la Cultura on Thursday at 6pm. Learn pinata making, hammock making, Yoga, dance & more! 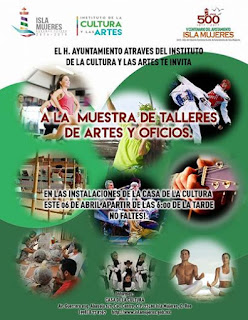 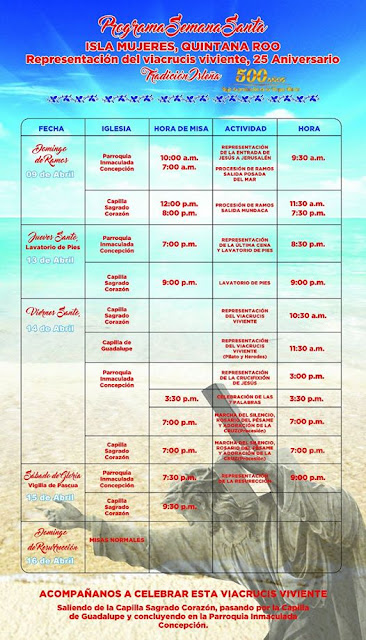 On Good Friday, April 14, about 75 actors are expected to participate in the reenactment of the Passion and Death of Jesus Christ, which is part of the celebrations of the 500 years since Catholicism came to these lands. This will be the 25th anniversary of this celebration of the Passion of Christ in Isla Mujeres, and will include all the actors who have played Christ over those 25 years.
Holy Week begins April 9th with Palm Sunday, with the blessing of the palms and more emphasis will be given to the entrance of Christ (played for the sixth time by Wenceslao Trejo Martinez) into Jerusalem, riding on a small burro, as it says in the Scriptures.
A press conference was held about the event by parish priest Raul Sanchez, who explained that more than 30,000 pesos are being invested in the event, since it celebrates the 25 years of this event as well as 500 years since Isla Mujeres was encountered by Europeans, bringing Catholicism. They are getting new armor from Guadalajara for the Roman soldiers, and a renovation to the wardrobes of the main characters, so they will look more professional and realistic, as well as the costs of the burro.
Azalia León Pastrana will play the role of the Virgin Mary. According to the calendar of activities, on April 13, Holy Thursday, the ceremony of Foot Washing and the representation of the Last Supper will take place; Good Friday will begin at the Sacred Heart Church (in la Gloria), at 10:30 in the morning, with the representation of the Stations of the Cross, and will culminate at three in the afternoon at the Church of the Immaculate Conception (on the Town Square) with the crucifixion of Christ.
~~~~~~~~~~~~~~~~~

Friday April 7 6:30-8:30p Cocktail reception for Batik Artist Sergio
Amar Cocina Peruana Restaurant is on the back street Guerrero, just north of Abasolo & the Cultural Center, on the west side of the street. Sergio's impressive batik art can be seen, and purchased, at the Thursday Artist Fairs. He also does murals & sign painting. We love the mural he painted for us! His are will be featured and for sale at the restaurant all month. 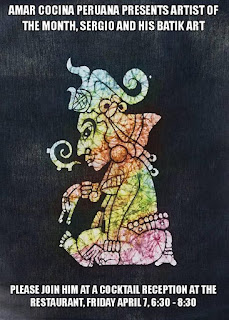 Sunday, April 9  Palm Sunday
On Palm Sunday at 9:30am, a procession will reenact the triumphant entry of Jesus Christ into Jerusalem, by walking from Playa Centro to the Town Square, where a mass will be celebrated in front of an audience which is expected to be ~1000 Catholics.  Fifty people will participate as actors and 20 will be in charge of logistics.
Another reenactment of the entrance of Christ into Jerusalem is scheduled for 7:30pm from the tourist center at Mundaca Hacienda to the Sacred Heart Church in La Gloria, where Mass will take place.

Holy Thursday, April 13 Foot Washing Ceremony and reenactment of the Last Supper Town Square Immaculate Concepcion Church
There will be two Last Suppers and Washing of the Feet reenactments, with the first at the downtown church Immaculate Conception at 8:30pm and the second is an hour later at the Sacred Heart Church

Good Friday, April 14 10:30am Sacred Heart Church (in la Gloria), Passion of Christ reenactment with the Stations of the Cross . On Friday,  reenactment of the ViaCrusis (passion play/stations of the cross) will start at 10:30 (at Sacred Heart) and join the other group at the Guadalupe Chapel (overlooking the Caribbean in Salina Chica) and they all will go together for traditional walk to downtown, which is four kilometers finishing on the Town Square at 3p with recreation of the crucifixion of Christ.

Sunday, April 30 on the Town Square stage at 8p. A Celebration of the International Day of Dance