Isla Mujeres History on Facebook & Website
Isla Mujeres and the rest of the state remain in Green thru March 13, with no capacity limits for bars, restaurants and hotels. 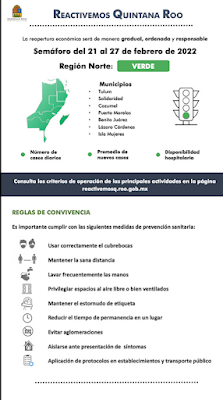 The state Semaforo remains in Green status thru March 13, and Q Roo continues in Green on the federal semaforo as well. The graphics show the past two years of the pandemic with the past two weeks shaded grey. Isla Mujeres is second best in the state, with a 62% decrease in reported cases. Benito Juarez (Cancun) had a dramatic decrease after it had peaked with more than 900 cases reported daily. All the municipalities of our Northern Zone reported decreases, except the two that are "Without Variation", and remaining at zero cases. Statewide, hospital occupancy is at 1% for regular beds and 2% for beds with ventilators. The Contagion Rate increased slightly to 0.6 from 0.5 last week.
The Governor emphasized the importance of maintaining protocols for C-19 prevention & not letting down your guard. He noted that WHO continues to recommend masking and that Mexico is not among the countries who've stopped requiring masking in open-air spaces. He said the coming Semana Santa vacation period will attract many visitors and represents an increased risk. Although hours have been extended and capacity limitation ended, it is important to continue following health protocols. 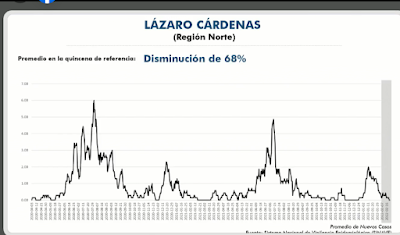 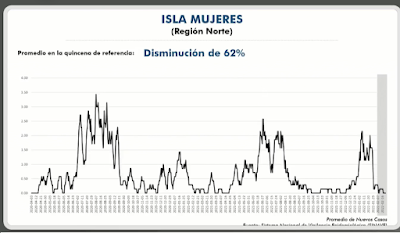 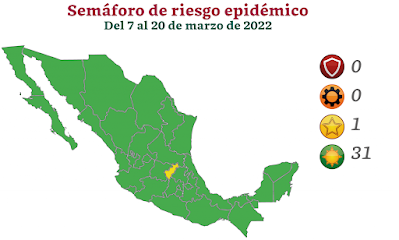 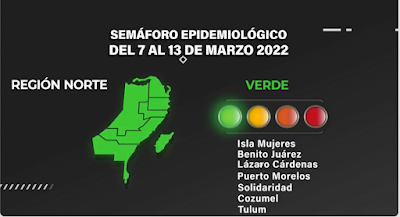 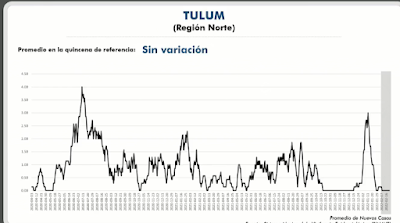 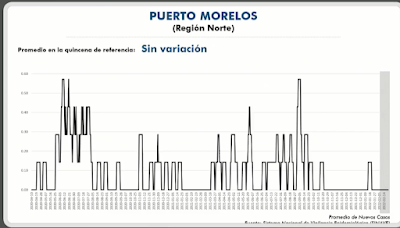 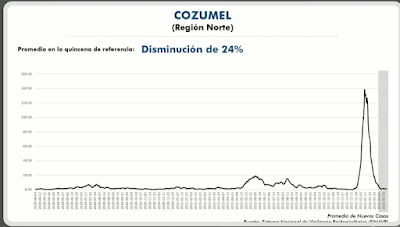 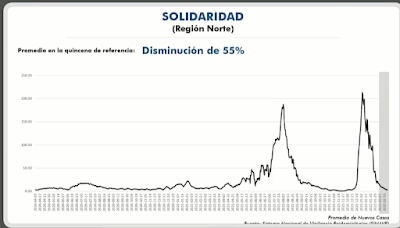 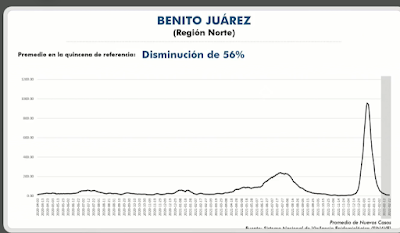 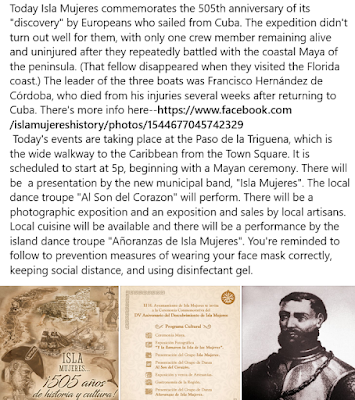 Sat. March 5--Aguakan Advisory: Tuesday, March 8th, there may be water outages or low pressure due to electrical maintenance being done at the Capacitation Zone. 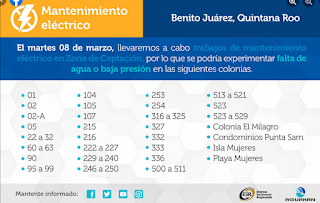 The Cosme Alberto Martinez Magana fishing tournament is back! The 17th edition will take place May 21 & 22, with more than 600,000 pesos in prizes. 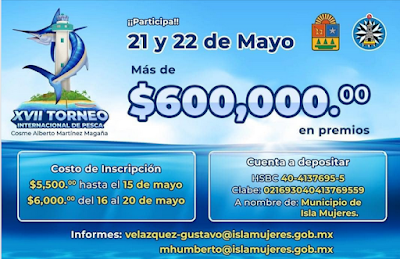 Sat. March 5-- Workers are painting the speed bumps around the isle to improve their visibility and motorists are advised to be cautious in the areas where they are working, which may be reduced to a single lane. Golf cart rental agencies are advising their customers.
Sat. March 5--Yesterday, two foreign tourists lost their lives when the propeller of a boat ran over them while they were diving 7.5 nautical miles from Isla Mujeres. The tragedy occurred near the sunken ship “Cañonero C-55” when the two North Americans aged 60 and 65 were returning from their first dive. They were run over by the large boat from Cancun "Mr. Tom", owned by the business Scuba III, whose captain was detained. They were assisted but one died at the scene and the other passed away minutes later aboard their dive-boat, where first aid was given. The captain of that boat, "Scualo Adventures" (sic) said the foreigners were returning from their first dive and secured to (agarrados) the signal buoy and that the captain of "Mr Tom" ignored the warning-buoy indicating divers were present.
LINK to FB  Video of last evening's festivities commemorating the 505th anniversary of the 'discovery' of Isla Mujeres (and what is now Mexico) in March, 1517 by the expedition of Francisco Hernández de Córdoba.
Sat. March 5--Tomorrow, at the stadium "El Pescador" (in front of Chedraui), the Isla Mujeres Tiburones will play the Bombarderos of Cancun starting at 12:30 in their league's Semifinals. This decisive match will determine who advances to the Grand Final. Photo/graphic credit-Isla Mujeres al Momento 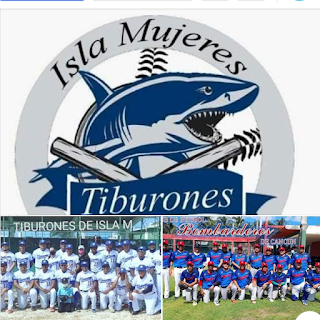 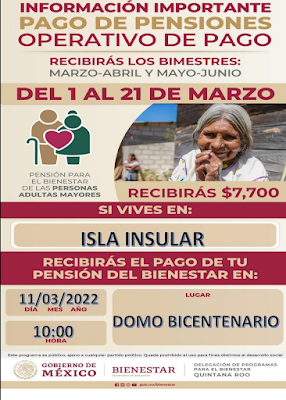 Sat. March 5--
Yesterday, Isla Mujeres commemorated the 505th anniversary of the expedition of Francisco Hernández de Córdoba landing on the island, after being blown off-course in a "norte". The festivities at the Paso de La Trigueña/eastern malecon included performances by dance troupes and local musicians, a Mayan ceremony and local cuisine.
Sr. Hernández de Córdoba is credited with discovering the Yucatan and what is now Mexico, after landing on this uninhabited isle. The Spaniards named it for the icons of women they found in a temple, left in honor of the Mayan goddess of fertility, Ixchel. They replaced the half-garbed statues with an icon of Mary.
The expedition of 110 men in three boats came from Cuba and sailed north around the coast, battling with the Maya, until all but one were injured, and over 50 had died. The uninjured man disappeared when they stopped off in Florida and Hernandez died a couple weeks after returning to Cuba.
Although in modern times, Cuban refugees have frequently landed on the eastern shores of Isla Mujeres in tiny makeshift boats, these Spanish explorers didn't cross the ~100 miles of open sea until a quarter century after Cuba was discovered.
There are discrepancies among the various accounts of the voyage, all written by non-participants, except one who penned his version nearly fifty years later, but it's generally accepted that the expedition was motivated by a need for slave labor in Cuba, as well as a desire for exploration (claiming land/sovereignty) and gold.
Their first battle was in the municipality of Isla Mujeres, north of the island at Cape Catoche, aka "Where the Conquest of Mexico Began". They captured two Mayans, baptized them, and took them back to Cuba to be trained as translators.
Before they landed on the island in early March of 1517, they thought they were going to die in the 'norte' storm. Then they were flabbergasted by the sophisticated buildings they saw along the coast, which they compared to the fine architecture of Seville, Spain.
Although the Spanish lacked awareness of the sophistication of the Mayan culture, which differed considerably from the other indigenous people in the Caribbean who lived in huts, this wasn't their first encounter with them. In 1502, Christopher Columbus came across a large Mayan canoe in the Bay Islands of the Gulf of Honduras, full of trade goods and presumably from the Yucatan. Its ~40 passengers included well dressed merchants, their families, and about 25 oarsmen. It was eight feet wide, 'as long as a galley' (~50ft), with a covered area in the middle that protected the women, children, and goods. He compared it a Venetian gondola and was impressed with their seamanship. Mayan murals portray boats with raised, curved bows and sterns.
Columbus considered these Mayans to be more civilized because they were clothed, unlike natives of the Caribbean islands. He described their fine textiles, weapons made of flint (probably actually obsidian), and copper goods including cups, bells and hatchets, which ended up in his possession. The Mayan merchants carried a type of beer made from fermented corn, which young Fernando Columbus enjoyed.
A cabin boy on that voyage, Antón de Alaminos, was the main pilot fifteen years later on the 1517 Hernandez expedition that 'discovered' Isla Mujeres. In 1518, Alaminos piloted another expedition to Yucatan and named the peninsula "Isla Rica", thinking it was an island, before joining Hernán Cortés on a trip that culminated in the Conquest of Mexico.
When the Cortes expedition came to Yucatan in 1519, they learned there were two bearded men living among the Maya, who turned out to be Spanish survivors of a shipwreck in 1511. Originally, there had been about 15 people aboard (one account says 16 men and 2 women) traveling from Panama to Santo Domingo (Dominican Republic). They drifted in a lifeboat until currents brought them to the coast of what is now Quintana Roo, where the Maya sacrificed some and put others in cages.
Eight years later when Cortes arrived, he found that one of the two remaining survivors, Gonzalo Guerrero, had "gone native", becoming a military leader, marrying the daughter of a Mayan official, and fathering the first mestizo children of Mexico. It's said that his expertise was instrumental to the Maya in the bloody battle of Champoton in 1517, where Hernandez received his fatal wound and many of his soldiers died. The extensively tattooed Guerrero expressed a preference for his current life and staying with his family, declining to join Cortes and his army.
The other survivor, Jeronimo de Aguilar, was a priest who'd escaped his first captors to become the slave of a rival Mayan leader. Some say that his life was spared because he carried a "Book of Hours" (Horarium) which were only possessed by priests and nobles in those days before printing presses. It's said the Maya had high regard for those who carried books. Aguilar accepted Cortes' offer and became his personal translator, playing an important role in his campaign.
Because the Maya had first-hand knowledge of the Spanish since 1511 and 1502, it is likely that the arrival of the Europeans was not unexpected when Hernandez landed in early March of 1517. Ten months later, the Pope ordered a church be built to establish the Yucatan diocese, and the Boca Iglesia church was constructed just up the coast near Cape Catoche, presumably using stones from the Mayan temple they'd looted on their first visit. Its status as the first church in Mexico is tarnished by the fact that it lacked a priest, since the one the Pope assigned went elsewhere, purportedly due to the isolation of the site.
The Spanish encountered many challenges attempting to control and settle the region; the terrain was difficult, the inhabitants hostile, and in 1537, the Spanish government acknowledged that the Caribbean was infested with pirates. After a smallpox epidemic decimated the Mayan population, the Conquistadors successfully conquered the Yucatan in 1546, including the chiefdom of Ekab, where Isla Mujeres and Cozumel were located.
Written by Ronda Winn-Roberts for Isla Mujeres History, sponsored by Maravilla Caribe Bed & Beach. 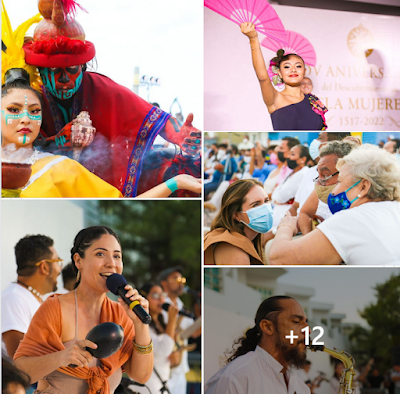