Isla Mujeres History on Facebook & Website
In a video, the Governor said he is pleased to announce that as of tomorrow, Tuesday March 22nd, face masks will be voluntary in open air spaces, but they continue to be required inside and on public transportation. He explained that they won't be required when exercising, going to the beach or walking in the streets. He specified that they remain mandatory on public transportation and in closed-in areas like offices, supermarkets, banks, and in places were people congregate like mercados and tinaguis (flea markets/farmers markets).
People who provide services to the public in hotels and restaurants are still required to wear them, as well as educators, medical personal, and other service providers. Hours will be increased for businesses for more and better customer service.
This change will be dependent on the behavior of Covid, which they will continue to monitor, particularly during Semana Santa (Easter week) and in regard to various outbreaks that we still see in the world, which could reach Quintana Roo again. We know that face masks provide us with protection. Any time you think you might get exposed, wear it!
Friday, March 18...Update on the family whose house burned last Sunday in La Gloria, from a press conference at the hospital--
The four members of the family were initially admitted to the Community Hospital on Isla Mujeres, and then transported to Cancun General Hospital. The male and female adults remain hospitalized there in stable condition with burns over 80% and 60% of their bodies, respectively. The two minors, a boy and a girl, were discharged the following day and returned to the island hospital. They suffered first and second degree burns and the older boy had burns to his face and legs, while the younger girl had burns on her legs and thorax. They are receiving daily consultations and the Naval Hospital is providing the supplies required for their treatment. The Community Hospital Director said the children will remain there until they are completely stable to ensure they heal well. The municipal DIF (social service agency) is involved, as well as the Procuraduria de Menor (legal) and Trabajo Social (social work). Their care is being coordinated and they are receiving both physical and psychological attention during their recuperation. The fire was caused by a 10-kilo propane tank exploding, initial reports said this occurred when it fell.
(with FB Video by Noti Isla Mujeres)....The reporter explains that this accident occurred near Soggy Peso and resulted in an injury to this young resident who was on a scooter and hit by a rented golf cart, which was going backwards and driven by foreigners. They are awaiting the arrival of the Red Cross ambulance at the scene, with his family members, the tourists and the municipal police.
Thursday night....Both zones of Q Roo remain in Green thru March 27th on the state Semaforo, and our state remains in Green on the federal system as well. Most municipalities are at or near zero reported cases, but Isla Mujeres and Lazaro Cardenas (Holbox) had slight increases. Our municipality is at an average of 0.27 cases daily this past week.
The state Contagion Rate is 0.8 which means cases are declining because when it is less than one, it means each case is infecting less than one other person. The state's Hospital Occupancy rate is less than 2% and there are no C19 patients on ventilators.
The graphs show average cases daily for the entire pandemic, with the recent two weeks in grey. Cancun is in Benito Juarez, Holbox is in Lazaro Cardenas, and Playa del Carmen's in Solidaridad. 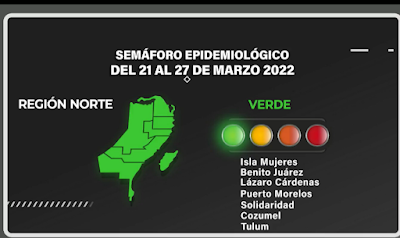 This report says that Cuban refugees apparently landed on Playa Media Luna on the eastern side of the island in this small homemade boat during the early hours without being detected by authorities. Photo credit Isla Mujeres al Momento. 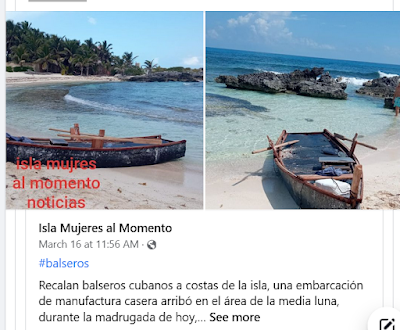 Wed. March 16.... Mayor Atenea Gomez Ricalde said she met with Aguakan managers in response to the ongoing reports of water outages and problems with wastewater overflowing. They said they are committed to addressing the problems by taking immediate actions. The graphic lists actions for the improvement of tap water service:
>Ongoing inspections to maintain the distribution network.
>"Tandeos" will be carried out to pressurize the pipes, as they are regularized for complete service.
>Installation of valves for admission and expulsion of air for good hydraulic function.
>Installation of electro-mechanical equipment at the Elevated Tank to improved pressure in areas of higher elevation.
>Improvement of the distribution network in the colonia neighborhoods. 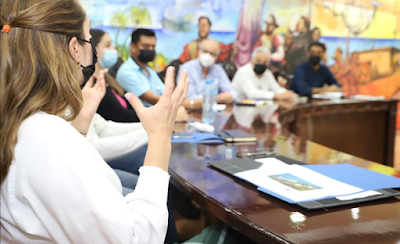 Wed. March 16....Adult residents of all ages needing a dose, including boosters, of Astra Zeneca C-19 vaccine are invited to come to the Bicentennial Dome in La Gloria today or tomorrow, with the required documents. They are also administering Pfizer vaccines tomorrow (Thur, March 17) to teenagers from 14 to 17 years old, who need to bring a parent, as well as their documents.
Mon. March 14.... A Canadian tourist lost control of her rented golf cart along the Caribbean coastal road, near Villa la Bella and it flipped. The 46 year old tourist was traveling south and said the wind blew her hat off and she let go of the steering wheel to grab it, and lost control, hitting the curb and flipping. She is a lawyer named Thomasina Dumonceau, and was transported in the ambulance for medical evaluation with Xrays. The cart was #24 from Gomar rentals and was impounded. The rental company representative and her companions went to the Public Security (police) station, with representative of the Tourism department, to determine responsibility for the damages. Photo credit-Isla Mujeres al Momento 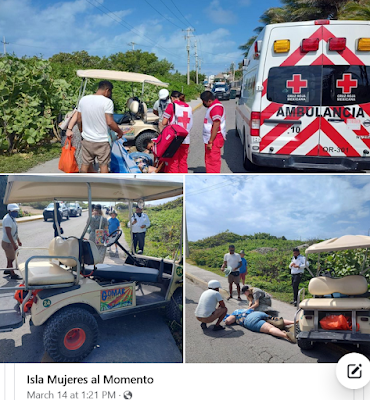 Mon. March 14...Islanders are collecting donations for the family who suffered injuries in a fire yesterday, and lost all their possessions, furniture, etc. There will be an event for their benefit at Tiny Gecko on Thursday, by LOMI (Lean On Me International). Today's update said they were taken to Cancun for specialized treatment and are stable. Photo credit-Noti Isla Mujeres 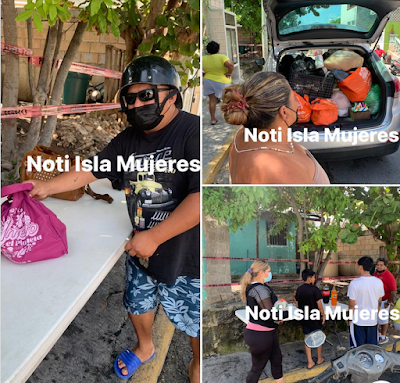 Monday, March 14...Yesterday the Isla Mujeres "Langosteros" lost with a score of 4 runs to 8, against the "Broncos", of the municipality of José María Morelos, at a home game here on the island at the Pescador stadium.
If you're over 18 it's time to get boosted! C-19 vaccine boosters (and second doses) are being administered 8am to 4pm at the Bicentennial Dome this week to young adults 18-29 (and any residents over 18).  Second doses are also available. Today is ages 18-21, Tues is 22-24, Wed is 25-27 and Thurs is 28-39. Don't skip breakfast & take your usual medications. The booster is Astra Zeneca and it doesn't matter which type your first two doses were. Bring your form from the mivacuna site, your CURP, a current utility bill, vaccine record and official ID. Wear your face masks correctly, maintain social distancing and use disinfectant gel. 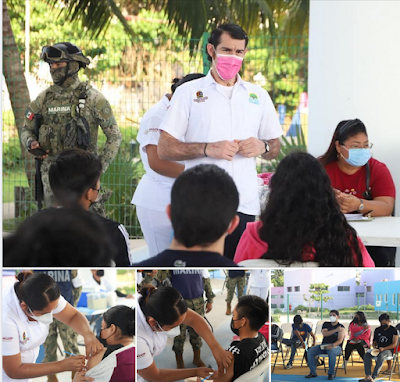 Monday morning, March 14...(with video of Sr. Sanchez Montalvo, speaking)-- There was a fire in a home in colonia La Gloria which was extinguished by neighbors and the firefighters. First aid was given to the two adults and two children who suffered burns. A male adult had burns over about 80% of his body and the adult female about 60%, who were transferred to Cancun for specialized care. The two children who had burns were treated at the Community Hospital and the DIF social service agency is attending to them and coordinating their care with any family members. This is Hugo Sanchez Montalvo, Secretary General of the City Council, who said information about the injured is preliminary and the fire was extinguished. The police will secure the building tonight, and tomorrow Civil Protection will inspect it. He said the firefighters told him that the cause was a 10 kilo propane tank that fell. There is video of the scene at Noti Isla Mujeres. LOMI (Lean on Me International) is planning a benefit for the family on Thursday at Tiny Gecko.
Sunday afternoon, caption for a video from Punta Sur...He says they've nearly finished the renovations at Punta Sur, which include replacing this structure that was previously made of wood and adding these letters. There is a very nice statue of Ixchel sitting in a crescent moon.
Saturday...Tourists lost control of their rented golf cart near the courthouse and flipped it. Photo credit Noti Isla Mujeres 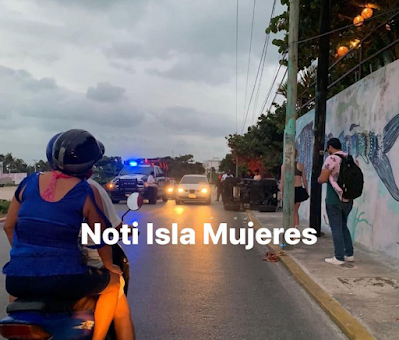 Sunday, March 12....
Better Public Transport for Students & Residents
The Secretary General of the Isla Mujeres taxi union responded to complaints by residents about long wait-times of up to an hour when taxis pass by without picking them up, because many drivers give preference to tourists. Ariel Rodriguez Peniche, General Secretary of the union "Gustavo Díaz Ordaz", said that the drivers should not be selective and should treat everyone equally without discrimination. He said anyone who denies service to the residents will be sanctioned. He asked islanders to report the numbers of cabs who ignore them and encouraged them to take pictures or video. These complaints have increased with students returning to school, who arrive late due to this problem. The schools will be back to full operation, starting on Monday.
The Isleño Bus company is adding two more routes in the morning starting at 6am to provide quality service allowing students to arrive at school on time. The student rate is 5 pesos for students in uniform or carrying their student ID, Monday thru Friday, while school is in session. The company plans to monitor the service to ensure everyone has access to their services.
The routes start from the Convention Center at 6a. Route 1 goes south down the West (Bay/Cancun) side of the isle on Rueda Medina, past the middle school and Chedraui to Mundaca. There it turns east across the isle on Ave. de los Peces, and returns north on Jesus Martinez Ross to Bachilleres and into downtown.
Route 2 also leaves the Convention Center at 6a, and goes south down the East/Caribbean Sea side, and past Bachilleres it jogs east to travel south down the coast on Perimentral / Payo Obispo to Pedro Joaquin Caldwell, where they meet Jesus Martinez Ross, traveling on the cross street Ave de los Peces by Mundaca. Then it returns north onto Rueda Medina traveling along the west side of the isle, past Chedraui and the Middle School, to downtown.
Passengers are reminded that face masks are mandatory, and antibacterial gel is provided, as well as temperature checks.  Pets are allowed on the buses. 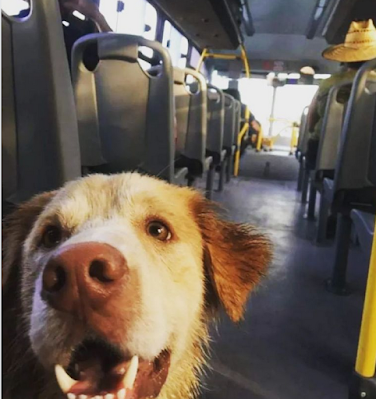