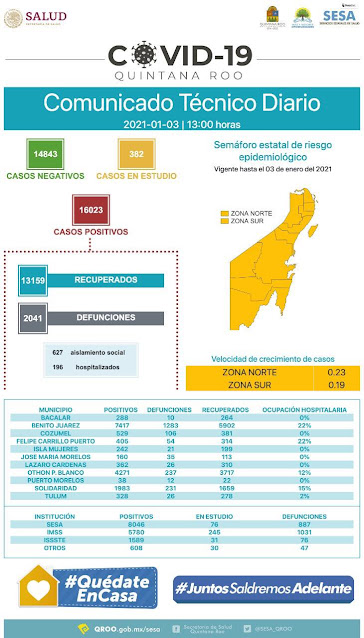 On Jan 2nd, Isla Mujeres continued to report a total of 242 cases of C-19 with 21 deaths and 199 recovered. The state geoportal for Jan 3 continues to report 2 active cases by colonia, with one in Amp. La Gloria and the other in La Gloria. For Jan 2, the national map continues to report 171 suspicious and 142 negatives. 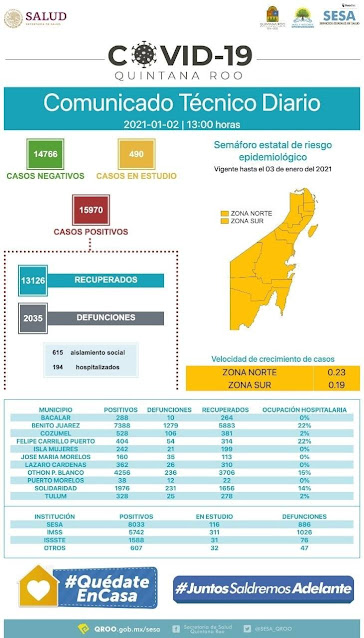 From Cambio 22  LINK    Yesterday (Saturday) at 10:35pm on the western perimeter road near the Makax cooperative, 20 year-old M.A.S.C. was allegedly driving his black Yamaha Krypton motorcycle at excessive speed while under the influence of alcohol, when he hit another motorcycle and and a moto-cargo vehicle, which were parked. There were no serious injuries, but there were material damages, and M.A.S.C. was taken to the municipal jail and placed at the disposal of the Public Ministry for determination of responsibilities, and the involved vehicles were taken to the impound yard.

According to the traffic officers, the driver was (allegedly) 'notoriously' drunk and lost control of his motorcycle and hit a black Honda Duo scooter sideways, whose driver, P.J.V.P., 34, had just dismounted. Then M.A.S.C. hit the moto-cargo vehicle, a white Dinamo Heavy Cab motocarro which was parked with furniture in its cargo area, while its driver was providing a moving service.  Fortunately, there were no serious injuries, which was confirmed by the Red Cross paramedics who arrived at the scene minutes after the accident and assessed all three drivers.

Cambio 22 reports that the  “Isleños Bus” company is not planning to raise their rates, despite the announced increase in fuel costs. A company representative said that the cost of 10 pesos for local users and Quintana Roo state residents will be maintained throughout 2021, in addition to the 50% discount for elderly and people with disabilities. There was a lowering of the price of four dollars or 80 pesos for visitors who want to visit Punta Sur and Sac Bajo by bus, which the article says allows greater contact and knowledge of the culture and customs of the islanders who use this means of transport. (See graphic for clarification of prices..it was posted Dec. 14.)

Company Director Iván Fierro said that for the first time the routes that serve Punta Sur and Sac Bajo are being considered as urban passenger transport for the benefit of employees who work at the hotels and beach clubs that cater to tourists. It is noted that in the fall of 2019, the municipal government granted the urban transport concession tho this company for up to 70 units, of which 60 would be in the Continental Zone and 10 would remain on the island.

The expansion in the Continental Zone was postponed due to the C-19 pandemic, and the Ciudad Mujeres-Punta Sam-Isla Blanca route is currently covered by three units, which will be gradually increased. Demand is expected to increase in the next ten years, with significant transportation of the workers associated with the 28,000 rooms that are planned in the Continental Zone in the medium and long term. Also,tourists and residents of Cancun and the surrounding area come to enjoy the beaches of Isla Blanca on the weekends & in high season, who currently have very limited urban transport options.  LINK

The municipal Parks & Gardens department continue the work of weeding, pruning, and removal of plant-based trash on the island & in the Continental Zone. Recently they have worked on the medians, parks and gardens in various colonias including La Gloria & Ampliacion la Gloria, as well as at the soccer fields, the baseball field "El Pescador", and along Rueda Medina and Prolongacion Aeropuerto. The residents are asked to do their part to keep these areas clean by not littering.

The Mayor says....Let's have a responsible reactivation while visiting the incredible natural riches of Isla Mujeres and enjoying the tourist activities that you can do as a family.

It the wee hours of today (Sunday morning) Naval personnel responded to an emergency call to their Command & Control room and rescued five people aboard a Sea-ray type boat that was adrift due to mechanical failures about 4 nautical miles (7.4 km) southwest of Isla Mujeres. Aboard the boat were a woman and four men; one of the men was American and everyone else was Mexican. They were taken to the dock of the Naval station at Puerto Juarez, where they were received by personnel from the Regional Harbor Master's office for the corresponding procedures. They were all in good health, did not require any specialized medical attention and left under their own power. LINK

The INE (voter registration) module will be on the island Jan  4-8 at the Community Development Center in colonia La Gloria from 8a to 3p, delivering the credentials that were recently processed and providing processing of documents.

The Association of Hotels of Cancun, Puerto Morelos and Isla Mujeres, reported that the occupation at the end of the year 2020 during December and New Year's festivities was 58.8 % for the 46,984 hotel rooms available in all three destinations. 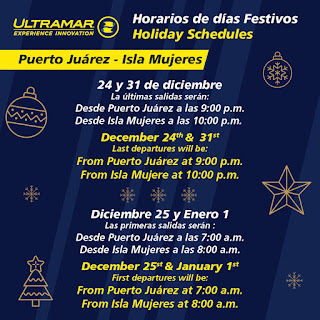