Isla Mujeres History on Facebook & Website
Both regions of the state remain in Green thru May 1st, for the eighth week in a row. Wednesday, there were zero persons hospitalized with C-19, for the first time in two years, and Thursday there was one patient, with none intubated. On the national map, all of the country is in Green thru May 1st.
Second boosters will be available for health workers and seniors 60 and older, whose first booster was at least four months ago. An intense campaign is taking place to make vaccines more available, with administration of C19 vaccines in clinics, communities, hospitals, shopping centers, airports, domes, hotels and other locations. Registering online at the mivacuna platform is no longer required, and people are advised to bring their ID, and if possible, their vaccination card. The Secretary of Health gave assurances that the Astra Zeneca vaccine is compatible with other vaccines and scientific studies support that it having different vaccines is effective and safe.
We are reminded that face masks are required in public transport and in closed spaces, and advised to use them in crowds and to employ healthy distancing and handwashing. 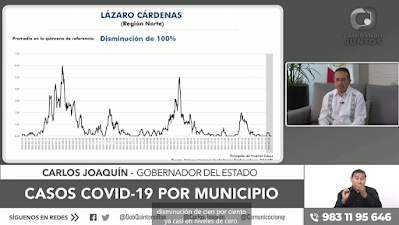 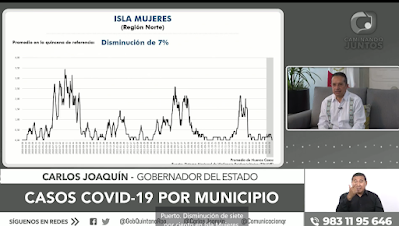 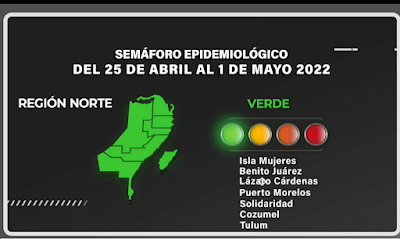 Thursday morning...WATER OUTAGES & LOW PRESSURE ADVISORY
Electrical maintenance in the Catchment Zone has affected the tap water supply in Punta Sam, which could cause water outages and low pressure on the island. Although the graphic lists ten colonias that may be affected, it's safe to assume the whole island may be affected since our tap water line comes from Punta Sam & those are the main colonias, located in all areas of the isle. This was posted last evening (12 hours ago).
Aguakan's page: https://www.facebook.com/DHCAGUAKAN 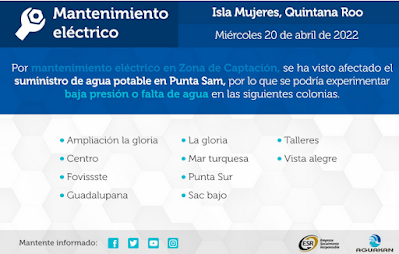 Wednesday...
~~NEWS UPDATE~~GOOD & BAD~~
>>RESCUING THE TORTUGRANJA has gotten more complicated, according to yesterday's announcement by the municipal Secretary General, Hugo Sanchez Montalvo. They received a legal document barring their access to the property, leaving them unable to feed the 20 turtles who remain there. He emphasized that it is now the responsibility of the federal agency INAPESCA personnel to ensure the well-being of these animals, and he considers these actions illegal and criminal.
He said it appears there was a court case and a dispute about privatization of part of the property. They are reviewing the municipal Master Plan to locate any 'bocacalle' easements that allow sea access & would permit them to reach & care for the turtles.
Additionally, the official nesting season is May 15-Oct. 15, but normally the Tortugranja staff begin patrols in late April. Before the season began in 2020, workers rescued eight hawksbill & loggerhead nests with 938 eggs. In the first photo, turtle eggs are being collected by a Tortugranja worker during a previous season, at Maravilla Caribe's beach. The graphic shows the number of nests collected yearly over nine years for the three species who lay on Isla's coasts, noting that results depend on the amount of effort by people monitoring and transferring the eggs. Also, the number of turtles coming ashore varies annually, and is said to influenced by feeding conditions, weather and other factors. When the eggs aren't relocated, they have a high chance of being dug up by another nesting turtle before fully incubating. Some years more than 100,000 eggs have been protected in incubation pens at the Tortugranja. (Carey=Hawksbill, Caguama=Loggerhead, Blanca=Green.)
>>THE NEW BUOY LINE is keeping the boats farther offshore at North Beach, prompting many positive comments from visitors & residents. Isla Mujeres continues to maintain its reputation for having some of the cleanest, sargasso-free beaches in the state, due to the geographic orientation of the isle and the work of the beach-cleaners. The traditions, culture, gastronomy, beautiful beaches and friendly residents of this vacation destination attract many visiting families.
>>EARTH DAY CLEANUP FRIDAY--Meet at 9a at the Photo op sign behind the Casa de la Cultura (bring your refillable water bottle). Volunteers (including snorkelers) who want to remove sea-trash need to register at a Dive Shop. At the 2019 Earth Day Cleanup, ~2 TONS OF TRASH were removed from our beautiful island & its sea! Want to donate or be a sponsor? +52 998 134 0712 or accionisla@gmail.
>>ACTIVITIES FOR KIDS include recreational activities and a soccer camp & tournament today thru Friday at the Salina Chica soccer fields at 5p. This week at the La Gloria Community Center, they are learning crafts, English, and cookie-making. The DIF social service agency is hosting a week-long mini-fair of games and adventures at the Bicentennial Plaza espalanade in La Gloria. Today, they're learning about sea turtles at the Bicentennial Dome in La Gloria, with fun activities, taught by Amigos of Isla Contoy & its National Park personnel. As part of this course about caring for our island, yesterday they saw a video "Daniel the Dolphin" about respecting marine species and caring for the environment. At the Casa de la Cultura, there were free workshops yesterday & today.
>>JOB TRAINING COURSES are being offered at the Community Center for 200 pesos in Commercial Tourism English, Hair Cutting, Bartending, Hotel Cleaning, Bread Baking, and Excel. Each course is 40 hours, meeting twice weekly.
>>C19 VACCINES are available 7a-7p weekdays at the Community Hospital thru April 29th. Quintana Roo has one of the highest vaccination rates in Mexico, with about 100% of adults having received their first jab, 90% with two doses and 52% with boosters, before this week's campaign. The outreach campaign has involved the Navy and provided modules at the ferry terminals & beaches, with brigades providing shots to workers in hotels, restaurants and at construction sites.
>>THURSDAY, THE RECYCLING COMPANY Remax is collecting unwanted electronics 7a-3p, picking them up from homes around the island who called and requested this free service. 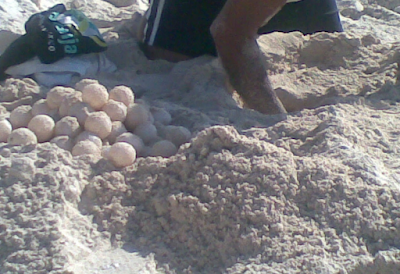 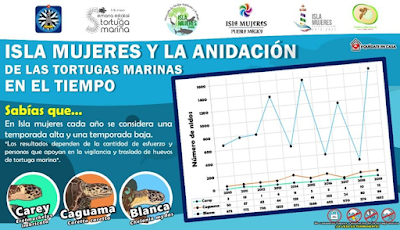 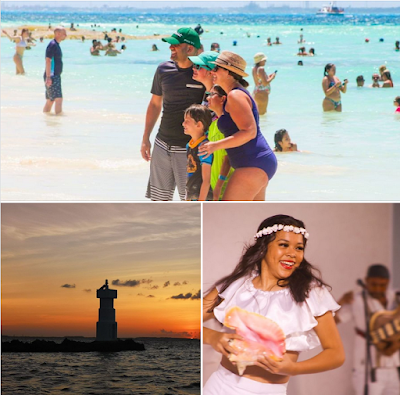 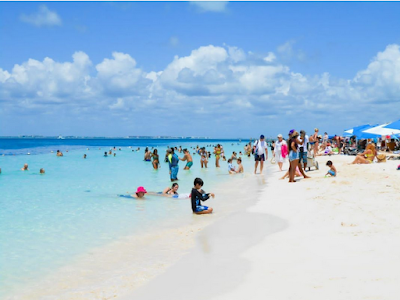 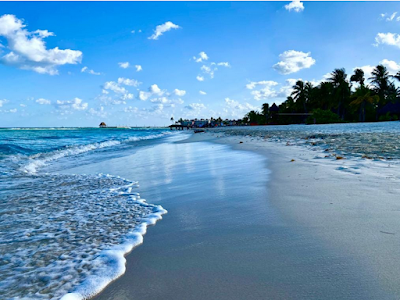 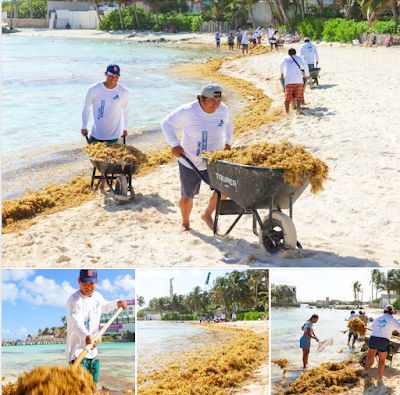 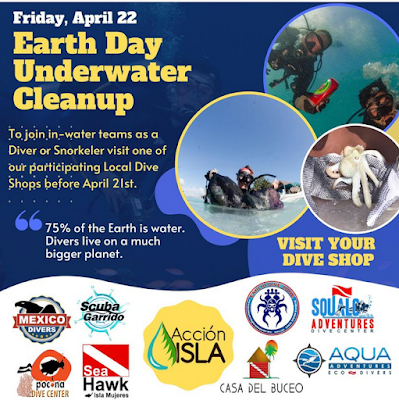 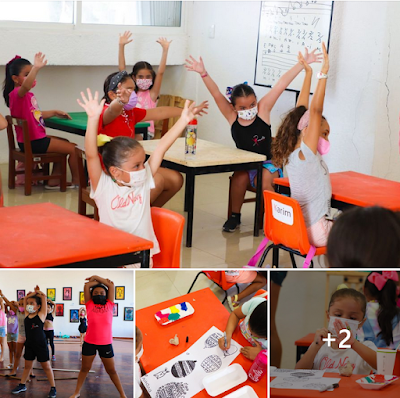 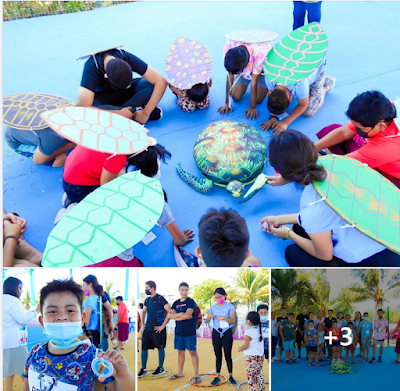 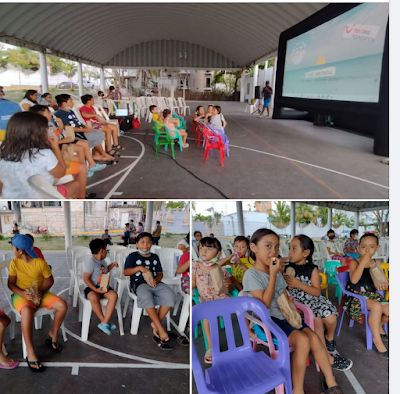 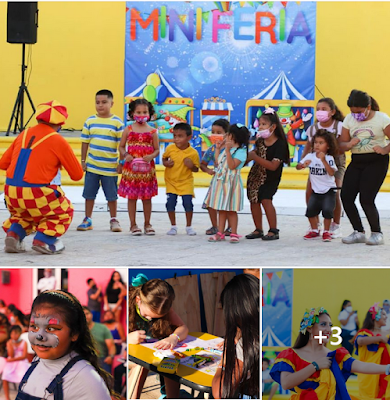 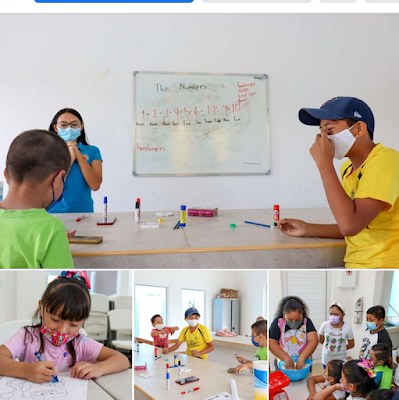 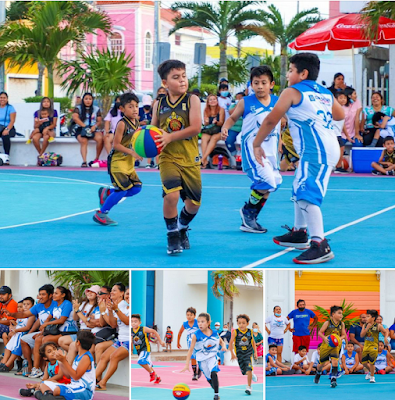 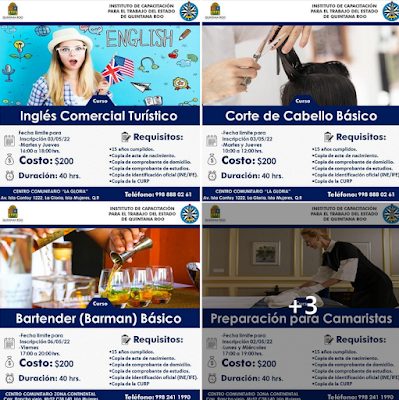 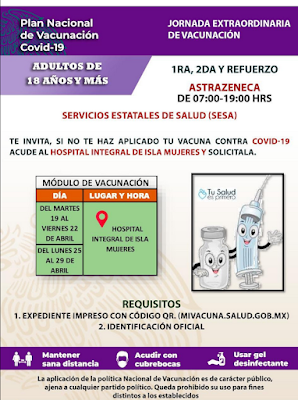 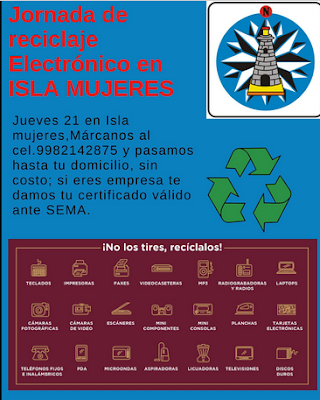 Sunday...
Canoes were spotted offshore yesterday, preparing for the upcoming Travesía Sagrada Maya / Sacred Mayan Journey event. The participants prepare for six months, to row from the Xcaret Park, site of the ancient Mayan port city of Polé, to Cozumel, returning the next day. The cultural event is physically and mentally challenging, reenacting an ancient tradition of honoring the goddess Ixchel (who was also venerated on Isla Mujeres). In good weather the journey to Cozumel takes five hours, in bad weather, about nine.
The first recreation was in 2007, with five canoes carrying 25 people. The event now attracts hundreds of participants, but was suspended in 2020 and 2021. This YouTube video explains the history of the original journeys, when the coastal Maya navigated and dominated these coasts in their large canoes, as well as information & scenes from the modern event (in Spanish & English).
It usually takes place the last weekend in May, but the sites about it don't have the dates yet.
Saturday, April 16...What's going on around the island?
TODAY--Starting at 5p, artisans of Isla Mujeres will be selling their products on the esplanade of the Casa de la Cultura. (At Abasolo & Guerrero-the back street, by the photo op sign).
TODAY--Starting at 7p, you're invited to a free performance by the folklorico dance troupe Guerrero "lyolmasehuayolt" on the esplanade of the Casa de la Cultura.
TONIGHT--The Moon is FULL and rises over the Caribbean at 7:16, just after the sun sets at 7:07. Tomorrow, the moon rises at 8:19, Monday at 9:24, Tuesday at 10:31, Wednesday at 11:36. Photos from Maravilla Caribe Bed & Beach.
TODAY & TOMORROW--Starting at 1p, you're invited to enjoy free live music and participate in beach volleyball games on Playa Centro (by the Fishermen's Monument at the north end of Medina).
TODAY & TOMORROW--The 24-Hour Nonstop Ultramarathon national competition will begin at NOON on the downtown Caribbean malecon.
TOMORROW--Starting at 1p, the Isla Mujeres Langosteros will play the Carrillo Puerto Mayas at the El Pescador baseball stadium, in front of Chedraui.
FRIDAY-EARTH DAY CLEANUP-- Check Acción Isla's page for volunteer info. Want to donate or be a sponsor? +52 998 134 0712 or accionisla@gmail. At the last one in 2019, volunteers removed 2090 kilos (~2 tons) of trash from our beautiful island and its sea!
"Operativo Semana Santa Segura 2022" security operation coordinates the activities of the various emergency agencies to ensure the safety of beach-goers.
The Civil Protection lifeguards will be on duty daily from 9a to 6p to provide assistance to swimmers when needed. You're reminded to take precautions to ensure your safety, and to follow their advice.
TODAY & TOMORROW--Residents can receive their 1st, 2nd or 3rd C19 vaccines at the Ferry Terminal next to the taxi stand (Astra Zeneca). Today 2p-8p and tomorrow 7a to 3p.
EASTER SUNDAY CATHOLIC SERVICES-Guadalupe Chapel-8a & 5p; Downtown Immaculate Conception-10a & 6p; La Gloria Sacred Heart-12p & 8p, Caridad del Cobre Chapel-11a
THURSDAY--Residents are invited to recycle their electronics for free, 7a-3p. Call Relmex (998 214 2875) & they will be picking up around the island.
Of the four cleanest beaches in Quintana Roo, three are on Isla Mujeres, according to the Navy's report, who monitor 80 beaches in our state. Of the most sargasso-affected beaches, two are in Cancun, one is in Playa del Carmen, and the other two are north and south of Tulum. 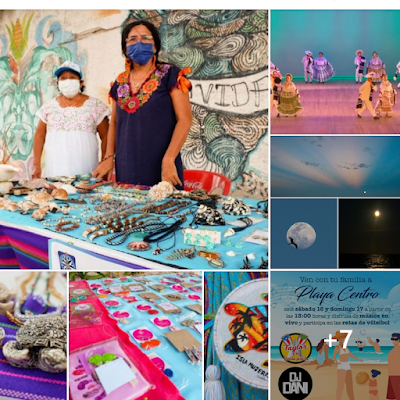 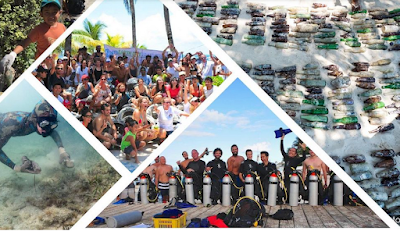 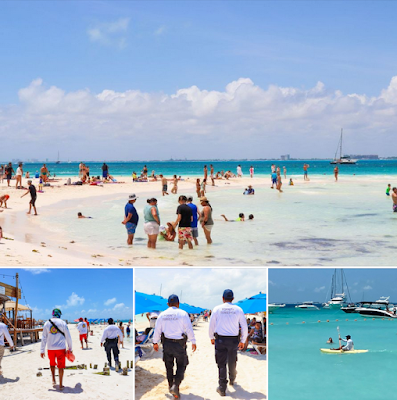 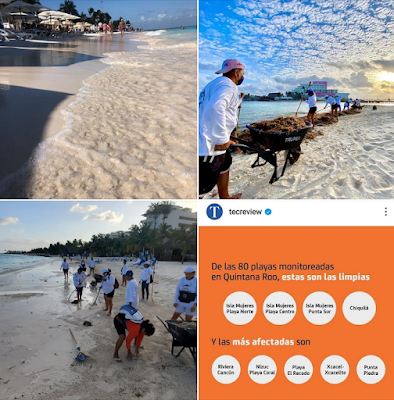 Friday, April 15. About 7 Cuban refugees landed in a small boat near Isla 33, with reports that two were detained by police.
Friday, April 15--The 4th edition of the 24-hour Ultramarathon national championship will take place in Isla Mujeres tomorrow. Kits will be distributed to runners today at 6p, with a brief talk, and tomorrow morning at 9am. The race begins at noon tomorrow, and they usually run on the downtown Caribbean malecon, as you can see in this video of last year's event: https://www.youtube.com/watch?v=Qdyj4fHHJr4
Thursday, April 15--
Both regions of the state remain in Green status thru April 24th, with all of the municipalities reporting very few, or zero, C-19 cases. Isla Mujeres reports an average of 0.25 cases daily, which is an increase. Benito Juarez (Cancun) also reported an increase, but has very few cases.
The Governor said there have been various days with zero cases or deaths reported statewide. Hospital occupancy is less than 1%, with only four C-19 patients in the entire state, one of whom is intubated, and has other problems. Quintana Roo is also in Green status on the national semaforo.
He reminds us that masks are still required on public transport, in crowds, and in closed spaces. They also must be worn by those serving the public.
The Navy is assisting with an intensive vaccination campaign taking place during this holiday season which includes modules at the ferry terminals, on the beaches, and in Cancun airport terminal #2 (domestic service). In addition, shots will be available at hospitals and clinics, and brigades will be administering them to workers in hotels, restaurants, and construction sites.
Our state is among three in Mexico who have reached approximately 100% coverage for first doses, among adults. We're at 90% for second doses and about 52% for third doses, according to the Governor.
This blog is brought to you by....