On Monday, our Northern Zone of the state will enter Orange status, as will the Southern Zone. Quintana Roo will also move to Orange on the Federal light.
The most populous area of the state, Cancun (Benito Juarez), is reporting 700 new cases daily compared to their peaks during Delta of around 250 per day, and their previous peaks were around 50 daily. The Governor said the Contagion Rate in our Northern Zone has risen to the point where each person is infecting about 3 other people. It was 2.3, rose to 3.6 one day, then 2.8. The hospital occupancy rate in our Zone has risen to 22%.
Quintana Roo's vaccination rate is at 98% for having one shot and 93% for both shots. The Governor repeatedly emphasized the importance of following health protocols including wearing masks correctly and consistently, avoiding crowds, giving preference to well ventilated areas, frequent handwashing & use of antibacterial gel, getting vaccinated, and healthy distancing. 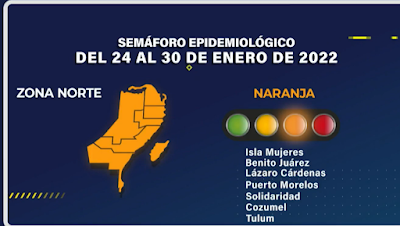 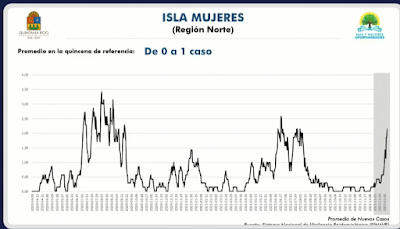 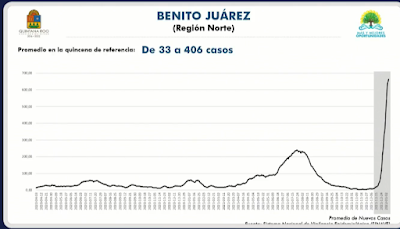 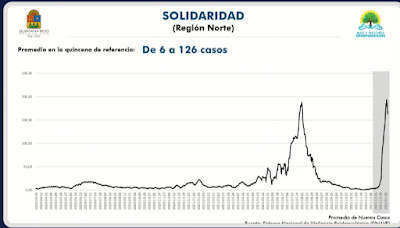 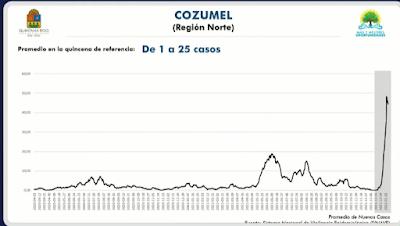 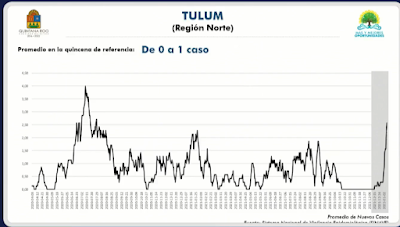 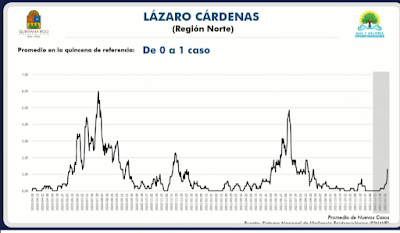 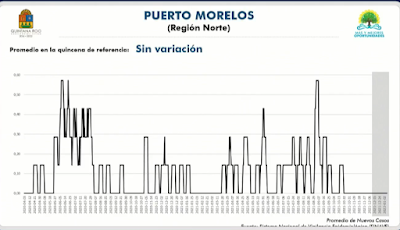 The municipal government invites you to join them on Saturday morning at 7am for a clean up in colonia La Gloria, where residents are reminded to set out their junk on Friday night (mattresses, appliances, etc) for pick-up. 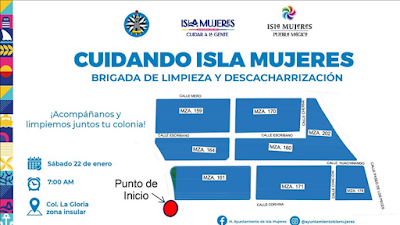 Today--The Mayor reported that since she took office at the end of September, 26,500 tons of trash have been removed from the Transfer Facility to the mainland landfill, in 1364 trips.
They have also collected 4250 tons of garbage in the streets. This week the Parks and Gardens department has removed 21 loads of brush from various areas of the island including colonia Electricistas park. They've also pruned & attended to the landscaping by the whale shark monument and between Punta Sur and the La Gloria cemetery, as well as the medians of Los Peces Avenue and Rueda Medina.
The Public Lighting department worked in the neighborhoods of Salina Grande and downtown, installing a total of 130 LED lights, doing 380 repairs, and responding to 6 citizen reports. 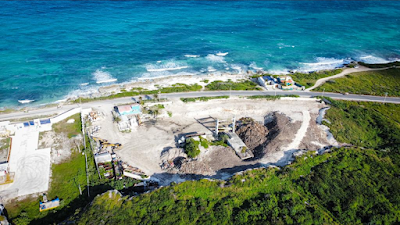 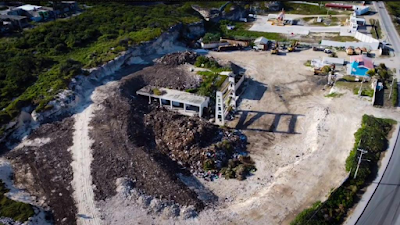 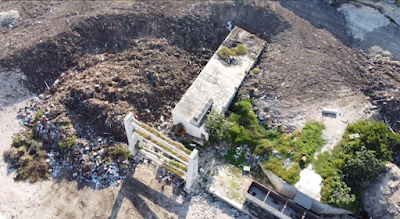 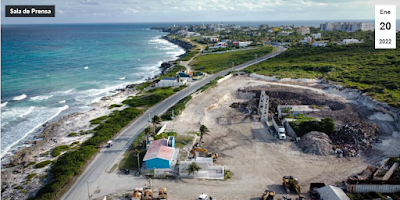 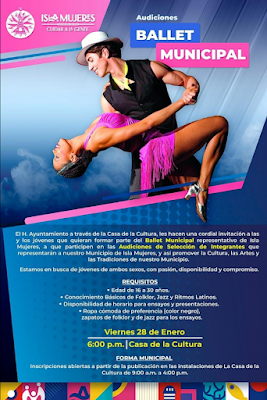 Today (this morning)--    On Tuesday night's video, the Governor said that 98% of adult residents in Q Roo have received at least one dose of C-19 vaccine and 93% have been given both doses, making our state one of the most advanced in Mexico in vaccine coverage.
Boosters have been administered to seniors (60+) and teachers in Isla Mujeres, which is ongoing around the state, in addition to providing vaccines for adolescents. They plan to announce the booster locations for the 50+ age group this next week.
He said variants other than Omicron remain common in the state, particularly Delta, which tends to cause more serious symptoms than Omicron. He emphasized the importance of following the protocols and not letting down your guard, because we are close to going to Orange status. The state's daily total of New cases has exceeded 1000 on three (non-consecutive) days, which is the highest throughout the pandemic. Hospital occupancy has not risen in proportion with the increased number of cases, nor has the number of deaths. Statewide, hospital occupancy increased to 16%, from 12% last Tuesday.
The state government obtained 15,000 rapid antigen tests and is currently providing free testing for residents with symptoms at Punta Cancun thru Jan. 29. This will be available in Cozumel and possibly at various hospitals and health centers, soon.
This is the second week in Yellow status, and once again colonia La Gloria made the state's "Top Ten" list of colonias reporting the highest number of Active cases, moving up to 7th place (from 8th) with 13 active cases. The state Geoportal reports 34 Active cases on the island as: Centro-1, Salinas-3. Electristas-2, Meteorologico-2, ~Sac Bajo (col #5)-2, Caridad del Cobre-1, Miraflores-4, El Canotal-5, La Gloria-13, and Guadalupana-1. (Not all cases are in the official reports.)
Tonight he'll announce the color status for next week (~9p) and publish the updated graphs for each municipality, which we'll share. We're reminded to follow protocols to reduce contagion: wear masks correctly, wash hands/use antibacterial gel frequently, get vaccinated, use healthy distancing, avoid crowds & keep spaces well ventilated. 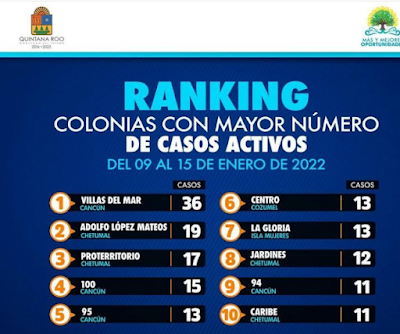 Jan 17 --A large whale shark was videoed near Punta Sur. Many of them migrate to the region to feed from June thru September, but some also pass by at other times. You can see the paths of some who were tagged here: http://www.ghritracking.org/ 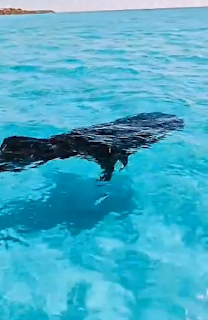 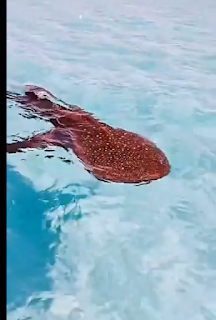 What's the official status of C-19 & what do the different colors mean?
Although we departed 2021 in "Green" status on the state epidemiological "Semáforo", our Northern Zone's Contagion Rate increased significantly from 1.0 to 1.4, indicating cases were rising sharply, with each infected person infecting 1.4 others. The Governor increased testing, checkpoints, and awareness about areas of high contagion, as well as positioning 'Yellow Cap" volunteers in public areas to encourage compliance with protocols. Seniors got boosted & we were advised to avoid crowds. We watched the NYE fireworks & first sunrise from our homes. Schools didn't reopen & students resumed 'distance learning'.
On Jan. 10th, both Zones of the state entered "Yellow" status, with capacities at restaurants and hotels reduced to 60%, bars closed, and hours for alcohol sales at restaurants and stores decreased. Cancun was reporting about 25 cases daily, officially (where nearly half the state's population lives, so it dominates the statistics).
Last night, the Governor expressed concerns about moving toward Orange status because our Zone's Contagion Rate has hit 2.0, meaning each infected person is infecting two others, causing cases to climb. Cancun is reporting nearly 350 cases daily, which overshadows Delta's peak of nearly 250 and their previous peaks of around 50 cases daily. We remain in Yellow thru Jan. 23rd, at least. The good news is that hospitalizations and deaths remain low throughout the state.
On Isla Mujeres, colonia La Gloria made the state's "Top Ten Colonias" with 11 active cases last week (ranked #8 statewide). Now La Gloria is reporting 13 active cases, of the 34 active cases on the island, officially.
Here's how the capacities work in Yellow, Orange & Red:
Beaches are limited to 60% in Yellow, 30% in Orange and 15% in Red.
Restaurants & Hotels/Rentals are at 60% in Yellow, 50% in Orange and 15% in Red.
In Yellow, alcohol sales hours are:
Restaurants: Mon-Sun 10a-11p, w permit-11p-1a
Stores: Mon-Sat 9a-10p, w permit 10p-12a; Sun 9a-5p
Bars, nightclubs, cantinas, discos, etc are closed except in Green.
The full graphics and more information are here--https://reactivemosq.roo.gob.mx/actividades-economicas/