On April 27, municipal and state authorities conducted an inspection tour of the downtown businesses that were damaged in the fire, to talk with the owners and begin assessing the damage. (Restaurants reopened within days, despite the damage.) 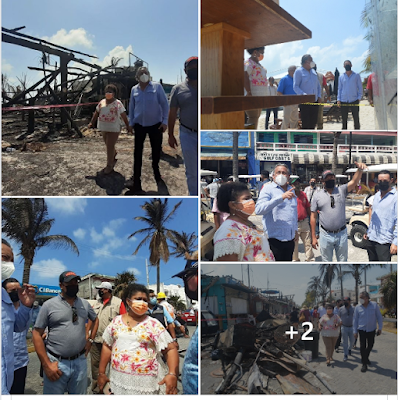 On April 30th, the Governor announced that epidemiological light color for our Northern Zone would change to Orange for May 3-9 (where it has remained since). This decreased the capacities for hotels and restaurants from 60% to 50% and the beach capacity to 30%. The increase in cases was attributed to the Easter holiday celebrations and crowds, which also occurred after the Christmas holidays, when we were in Orange for a month.

Vaccines were administered to residents 50-59 on May 5, 6, and 7 at the Bicentennial Dome in colonia La Gloria.

On Sunday afternoon, May 2, a group of seven EZLN Zapatistas from Chiapas set sail from Isla Mujeres in a "reverse journey" to Spain

In early March, 1517, the first expedition of Spanish Conquistadors came to Mexico, landing on Isla Mujeres. They continued up the coast engaging in various battles with the Maya until all but one of the Europeans were injured, or dead. (The injured fellow disappeared when they stopped off in Florida on their way back to Cuba, where the captain died several weeks later.)
On Sunday afternoon, May 2, a group of seven EZLN Zapatistas from Chiapas set sail from Isla Mujeres in a "reverse journey" to Spain, planning to tour more than 20 countries. They expect to arrive in the port of Vigo, along the coast of Galicia, in mid-June to meet with other political, anti-capitalist groups to raise awareness about the plight of indigenous people. Their sailboat is "La Montaña" (the mountain). https://www.youtube.com/watch?v=mbV9Qd_GlWE

As of the 5th of May, there have been 284 officially reported cases of C-19 in Isla Mujeres with 30 deaths and 250 recovered. The growth rate of cases in our Northern Zone has risen to 0.32, with the state in Orange status since Monday. The state geoportal shows no active cases as of May 6. The senior residents were given doses of AZ vaccine in February & April, and currently residents 50-59 are receiving their first doses.

May 7-Both regions will remain in the Orange status on the state epidemiological light, with capacities at hotels, theme parks and tourism services limited to 50% and beaches to 30%, for May 10-16. The Governor advises against having gatherings on May 10 (Mother's Day). 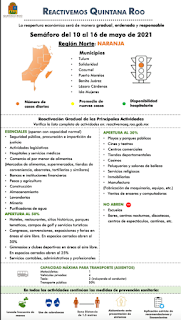 As of May 11th, there have been 286 officially reported cases of C-19 in Isla Mujeres with 30 deaths and 251 recovered. The Growth Rate of cases in our Northern Zone has risen from 0.32 to 0.41. (A month ago it was 0.20, then dropped to 0.18.) Our Northern Zone returned to Orange status on May 3rd, which reduced capacities from 60% to 50% at hotels, restaurants, and tourism services, and to 30% at the beaches.
Both doses of AstraZeneca C-19 vaccine have been administered to the senior residents of Isla Mujeres, and 50-59 year olds received their first dose of the Pfizer vaccine last week.

The Tortugranja is seeking adult, Mexican volunteers to join their team monitoring turtle-nesting beaches at night and relocating eggs to the facility's incubation pen. Applicants should have associated studies, be willing to commit for at least one month & be able to adapt to basic living conditions. Volunteers will receive a certificate of participation and the opportunity to attend workshops and receive training in environmental conservation. Those who are interested should email: 𝘁𝗼𝗿𝘁𝘂𝗴𝗿𝗮𝗻𝗷𝗮𝗶𝘀𝗹𝗮𝗺𝘂𝗷𝗲𝗿𝗲𝘀@𝗼𝘂𝘁𝗹𝗼𝗼𝗸.𝗰𝗼𝗺 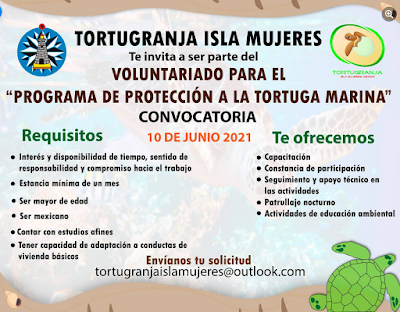 During the pandemic, cases of diabetes have "skyrocketed" on the island, according to Geovanny de la O Avalos, president of the nonprofit organization "Club Pro Paciente Diabético de Isla Mujeres". The organization suspended its large annual clinics, which served about 500 diabetics in previous years, and established a small facility where education, testing and nutritional counseling are provided individually, as well as free glucometers and testing supplies.
There are currently 380 residents (of the island and the Continental Zone) registered with the organization, which also provides diabetic supplies to the Community Hospital, Red Cross, public health clinic and health care practitioners on the island.
Mr De la O said that during the pandemic, many diabetics suffered from a lack of medical attention because they could not keep their regular appointments and only sought medical assistance in an emergency. In some cases, financial problems prevented residents from obtaining their medications.
He said that many people stopped watching their diet and the number of people selling desserts to help themselves financially proliferated, which are usually cheap and very high in sugar. (Pastries have also been donated by Chedraui and distributed by the DIF, social service agency.) A lack of exercise contributed to increased health problems. He noted that diabetics are advised to stay home and only go out when strictly necessary, whether the epidemiological light is yellow or orange.
There's more information at the link, as well as an application form for resident diabetics to join the Registry. Donations are always appreciated! Thank-you! (That's Geovanny at lower left.)
Source--Cambio 22, "La Pandemia Provocó un Mayor Número de Casos de Diabetes en Isla Mujeres" by Yolanda Gutierrez
https://www.facebook.com/isladiabetesclinic
Karen Rosenberg
We did not do a fundraiser this year due to the impact of Covid on businesses and more recently the devastating fire. Donations are greatly needed: PayPal.Me/isladiabetesclinic 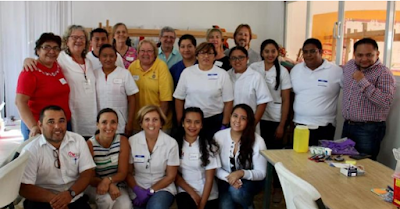 May 13--Our Northern Zone remains in Orange status on the state epidemiological light thru May 23, as does the Southern Zone. The neighboring municipality of Benito Juarez (Cancun) currently has more cases than it has had at anytime during the pandemic. 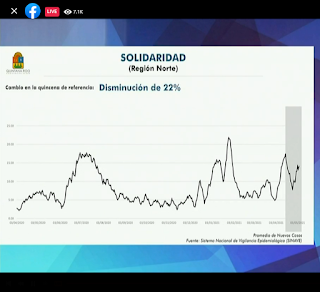 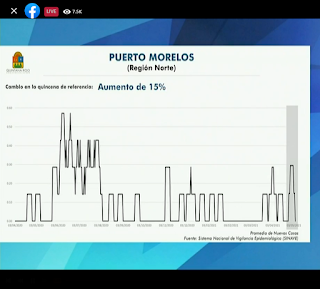 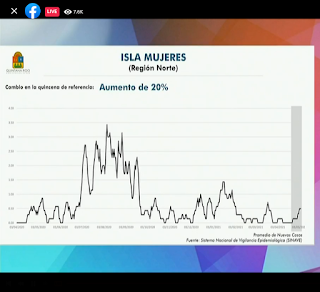 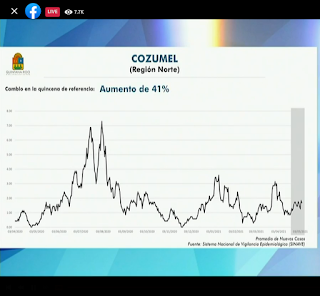 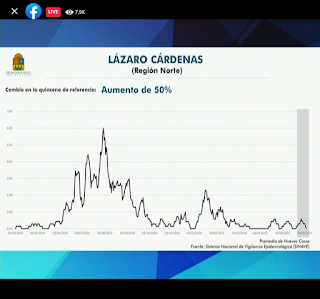 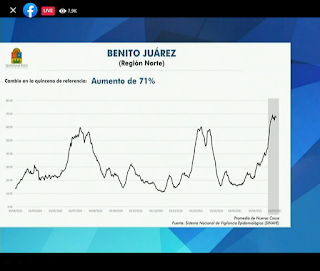 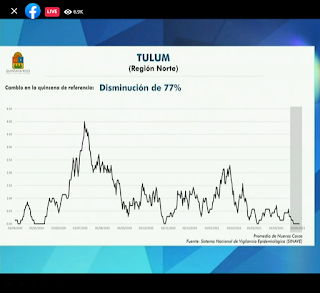 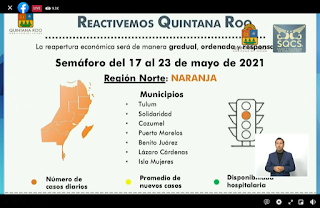 Q. What happens if we move to Red on the state "epidemiological light"?
The first graphic shows that capacities at hotels & tourism parks would drop to 15% and public beaches would close. The second graphic says that restaurants would reduce tables to 15% and only offer To Go or Delivery service. Businesses that would close include jewelry stores, gyms, salons, handicraft stores, boutiques & clothing stores.
Q. Why do the official graphics say Bars are Closed but tourists say Bars are Open?
A. It's a question of semantics. The "Bars" that are open are serving food & licensed as "Restaurants". The types of bars that are closed until the Green phase are listed in the last two graphics.
Q. What's the current status?
A. Our Northern Zone moved from Yellow to Orange on May 3, after the Easter holidays. We spent a month in Orange following the Christmas holidays. Otherwise, we've been in Yellow since Sept. 7th, with capacities at 60%. Orange means hotels, restaurants & tourism services dropped to 50% and beach capacity is reduced to 30%.
This past week, Cancun had more new cases than at any time throughout the pandemic and the Governor said cases have been on the rise for the past five weeks. The next update is Thursday night, for May 24-30.
Q. And in Isla Mujeres?
As of yesterday's update, our municipality has reported 30 deaths from C-19, with a total of 292 official cases and 252 recuperated. A total of 5915 vaccines have been administered to residents. Throughout the state, over a quarter million doses have been given. 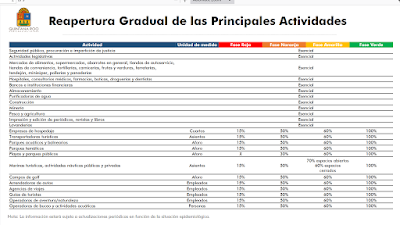 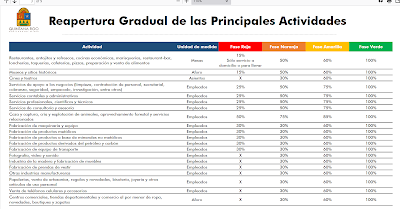 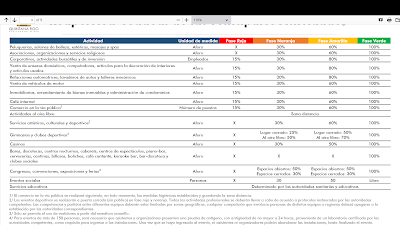 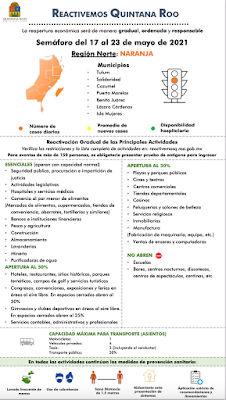 Today, May 16...Yesterday, the Governor congratulated teachers on their Day and said they will soon be vaccinated and ready for the next school year. He gave them recognition for their resilience in meeting the challenges of continuing to educate students from home. La Tertulia reports that vaccines will be administered to Isla Mujeres teachers on May 18-20 at the Naval base, noting that a significant number were vaccinated who are seniors or 50 and older. They should register at https://vacunacionqroo.seq.gob.mx and bring their CURP. 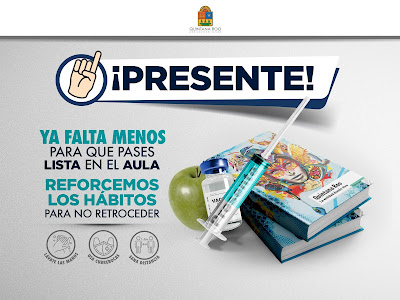 May 12--The City government announces that there will be momentary interruptions in traffic on Rueda Medina near the (cargo) ferry tonight, tomorrow and Friday between 8p & 5a, due to maneuvers by the large trucks transporting trash to the Continental Zone landfill from the Trash Transfer Facility on the island.

May 11--Noti Isla Mujeres reports that no one was injured & officials are investigating an armed robbery at "Pizza Mike's", located in colonia Chica Salina near the Guadalupe Chapel. It says a safe and the day's cash were taken.

May 3 Dia de la Cruz is celebrated by construction workers in Mexico, and is associated with St Helena (Elena in Spanish). Crosses are placed atop construction projects, and crews take a break to pray and eat together, with food & drink supplied by the owner.

May 5  "Cinco de Mayo" Anniversary of the Battle of Puebla against the French. (Not celebrated on the isle, except at a few Happy Hours.)

Whale Shark Season officially begins May 15, if the permits are issued on time. Rays can also be seen enjoying the 'buffet' that attracts the whale sharks to this area. There are abundant fish eggs and plankton in the areas where they congregate and feed. It ends in mid Sept.

May 15 is also Teacher's Day